It feels good to get back to your roots. When I first started my exploration in photography, I shot mainly consumer colour films, Fuji Superia and Kodak Gold and Ultramax. Kodak Gold is a wonderful film with a rich history going back to the first Kodacolor films released in 1940, and it was improved version Kodacolor-X in 1963. Both of these films used the C-22 process. In 1973 the new C-41 process introduced Kodacolor II. In 1982 the three flavours of Kodacolor-VR came out with 100, 200, and 400 films. Kodak Gold 200, the film I’m reviewing today is the modern version of Kodacolor VR-G 200. And if you remember correctly, this continues the line of Kodacolor VR which today you can still buy as ColorPlus 200. Kodak Gold 200 is a lovely mid-speed film with all the warm Kodak colours that you expect. While not as readily available as the 400-Speed Ultramax (which I will be reviewing next month), it is still an excellent cheap-and-cheerful colour film for outdoor snapshots and professional work when you don’t want to drop the cash on Portra. To show off what the film can do, I am going to shoot it at three speeds, 100, 200, and 400 to show off how you can easily give colour negative a +/- one-stop changes and still process as normal. 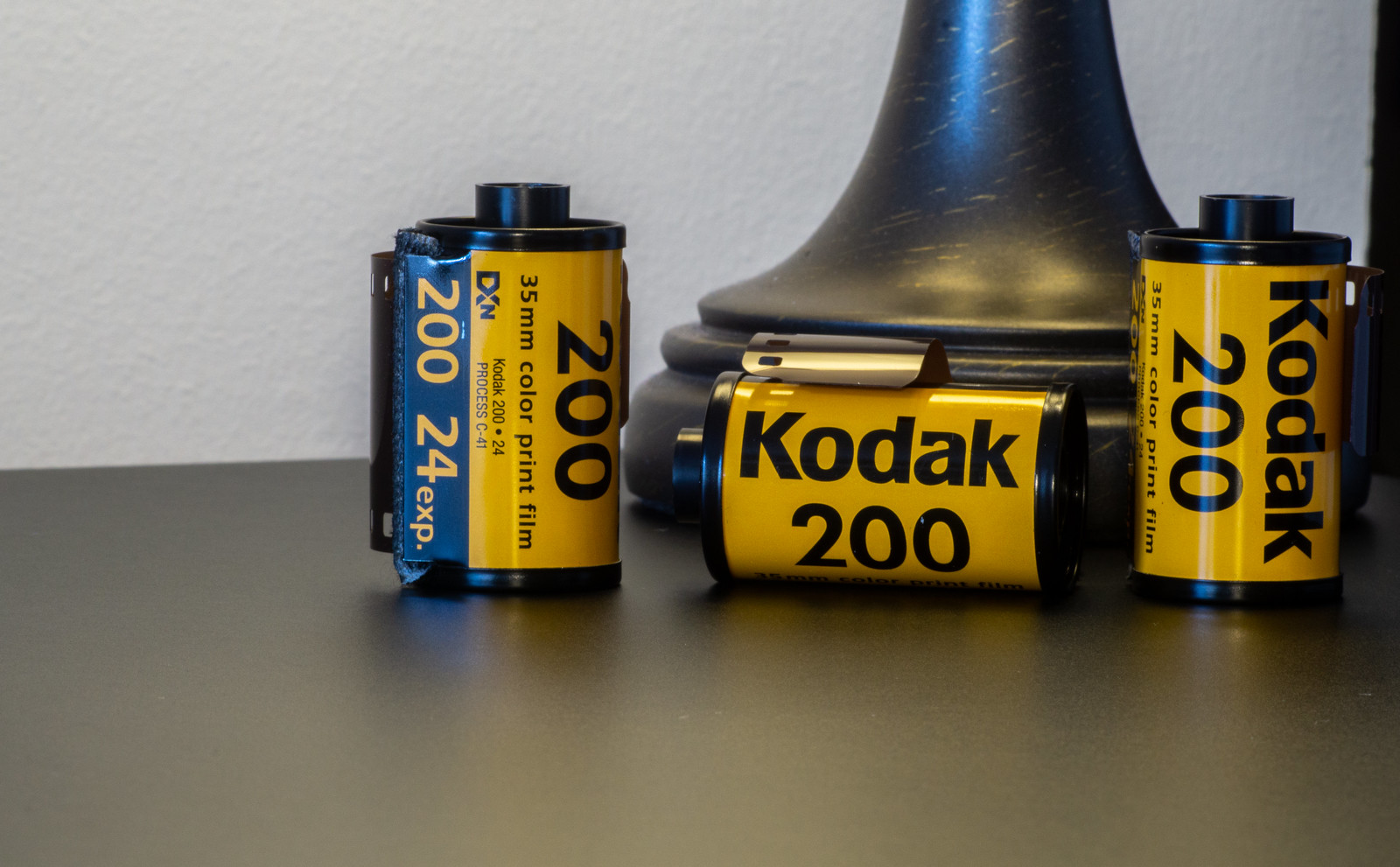 Colour Rendition
If there’s one thing that Kodak can always deliver is excellent colours, and despite being a consumer film, Gold 200 delivers the goods. While I still prefer the colours, I get with Kodak Ektar and Portra films. Personally, I find that the colours look best at box speed, no surprise there. You get that washed out pastel look with a one-stop pull, and with a push, it’s almost too saturated and punch-in-your-face. One thing I did note is that the colours leaned heavily into the magenta end of the spectrum, mainly in the highlights and mid-tones. Nothing overly concerning but it did take a bit in some images to correct it back to something normal. I shot these back in the fall and got treated to several days of excellent rich colours which Gold rendered nicely.

Image Quality
The image quality out of this film is not too shabby. I wasn’t expecting too much from the rolls that I shot outside of the box speed of ASA-200. The one thing I hoped to show off is the amount of forgiveness in consumer film designed for point-and-shoot cameras, which is why I included the Espio 115M. Now in all fairness, I got the lab to develop these films all normally which also could have skewed the results, but again the average consumer photographer would not ask for push or pull processing from their lab. Take the roll to run it through the machine and get the prints. That said, the film performed far better than I expected. If I had to sum it up in a phrase, Gold 200 took the pull well and the push okay. One thing that surprised me is how much contrast the film has, you saw it with the box speed roll, and it smacks you around with the pushed roll. The images are sharp, there is grain, but not too much, especially when shot at box speed and it comes through strongly with the push. Speaking of the push, you certainly will lose your shadow detail and even when trying to pull that out in post proved a terrible idea. While the film took the pull like a champ, pushing the film without adjusting your development is not the best idea.

Scanning
One of the best parts about this film is how easy it is to scan. I did all my scanning using a Nikon Coolscan V ED and the stock Nikon Scan (v4.0) software. The negatives scanned cleanly and easily without any trouble with the hardware or the software. The digital scans looked good right out of the gate, the only ones that I noticed only the roll I shot at ASA-100 I had any major colour shifts mostly leaning towards the magenta end. While Photoshop ended up overcorrected some to be more green, mainly in the highlights, I could manually adjust these back to a middle ground. The one thing that I did notice is that there is a fair amount of chromatic aberration, while not a present in the 100-Speed roll but fairly strong in the roll shot at ASA-400, no surprise there. Again Adobe Photoshop handled this light a pro. I’m not sure how well this film would have scanned using my Epson V700, but I find that Epson Scan does not do a good job with colour negative films. A program like Negative Lab Pro and a digital camera scan might be an even better option for digitising Kodak Gold.

Overall Impression
Gold 200 is not my favourite consumer film, it’s not a bad film, and there are a lot of photographers out there who swear by Gold 200. I feel much better about ColorPlus it has a slightly different colour palette and has that retro look. That said, if I needed to get film and could only find Gold 200, I wouldn’t have a problem grabbing a couple of rolls and shooting with the stock. Personally, I think that it is best at box speed with the one-stop pull being a close second. As I mentioned earlier, the film can take that one-stop push, but you want to adjust your development to keep those shadow detail. You’ll also want sunlight, while it can handle dull overcast, but you get the best results in clean, bright sunlight where you can have those colours shine. While Gold is a film that I learned with, I have since moved on, and while I don’t shoot colour too much, I’m more likely to stick to Ektar, ColorPlus and Portra.