When it comes to Zuiko lenses, I don’t think there is a bad one, sure some are better than others, but all of them are excellent performing optics. And the Zuiko 28/3.5 is one such lens, might not be the fastest lens for a wide-angle, but it is a strong performer. When I was putting together my OM kit, I did not want to spend too much money, and when it came to Zuiko glass, you can get some excellent deals on solid optics, but wide-angles are not one of them, especially the fast glass, but there is always a third option, the slower ones. Now the difference between f/3.5 and f/2.8 is minimal outside and depth of field, but the cost difference is where it counts. And I’m not averse to using f/3.5 wide-angle lenses; I use an AI Nikkor 28/3.5 (which will be reviewed later this year). So the 28/3.5 is an excellent choice for the budget-minded photographer looking to create an OM system. 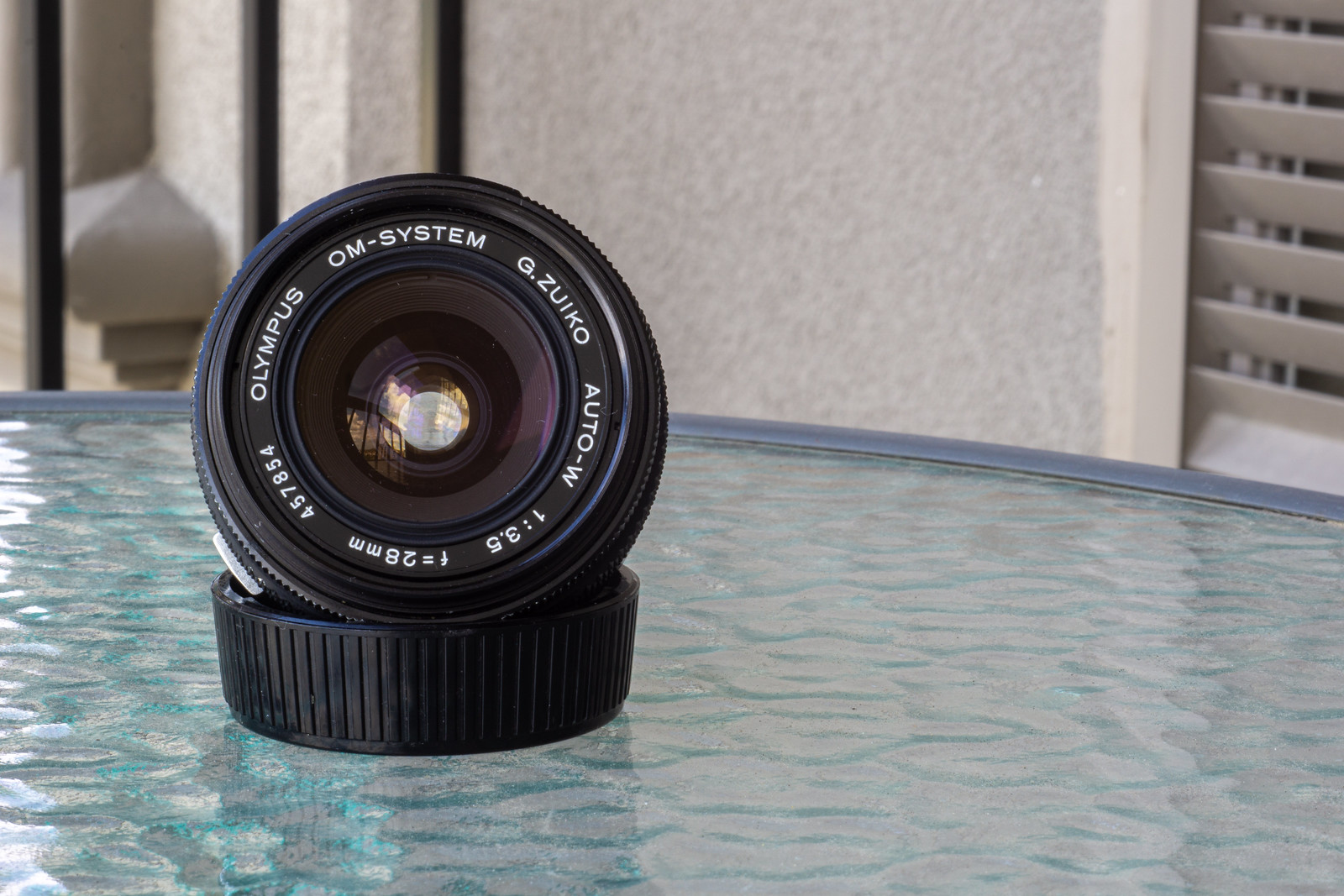 Build Quality
If you’re familiar with the Olympus lenses of this era, you’ll know that the lenses are some of the most compact lenses I’ve ever used, and that’s compared to the Series E from Nikon and Pentax-M. Despite the low profile, the lens is easy to operate once you’re familiar with the layout. And despite the price tag on the used market, the lens is well built, with all-metal construction and a comfortable textured focusing ring. Lens operation is smooth, which is both good and bad. On the good side, the smooth focusing ring allows for easy operations allowing for rapid gross movements while also being easy enough for slower, more refined focus movements. On the bad side, the aperture ring doesn’t have a solid click at each stop point, while not a deal-breaker, it is annoying not to have that solid satisfaction. Optically the fact the lens has a 7 by 7 construction surprises me mainly because I figured such a solid design would go on a faster lens, but honestly, I’m glad that I have such a good design with a small price tag. The filter threads are 49mm, matching most of the other lenses of the era allowing for just a single set of filters to be carried around. Overall I am happy with the lens, but I do have a couple of complaints, the first is the lack of stops, but I also get why. With the maximum aperture being f/3.5 including f/4 would almost be a duplicate aperture. Although having only five stops feels limiting, adding maybe f/22 would have been a nice touch. The second is the coating; the lens has a serious flare issue as you can see in some of the example images when working without a hood.

Image Quality
Suppose there’s one thing that you can always count on with all Zuiko glass, no matter what is a certain snap in the images. These things are sharp at every aperture, yes even wide open at f/3.5. While I did complain about the lack of apertures in the previous paragraph, because of that lack I honestly believe that the lens’ sweet spot is all the apertures from f/3.5-f/16 as I get sharp images at all apertures. However, my favourites remain between f/5.6 and f/11, which is normally where I shoot my wide angles. The lens also has almost no distortion, I’m sure that if the subjects are closer, there’d be some distortion of the straight lines, but at five feet I could see hardly any at all. When wide open, there is no vignetting on the corners. When it comes to the out of focus elements there’s nothing to talk about, they’re smooth but not always something I look for in a wide-angle as I mainly use them for architecture, landscape, and environmental portraiture. The one problem I have is that the lens flares easily, which, as I mentioned earlier, you can see clearly in some of my images. So it would be best to invest in a lens hood, you don’t have to go with the OG Olympus one, but find something that fits. I actually use my Minolta hood that goes with the W.Rokkor 28/2.8, which seems to have helped. But I did leave the hood at home the day I shot these.

Applications
The number one application I can see for this lens is that it is a perfect spot for someone new to the OM-System to get a solid wide-angle lens into their kit. The perfect companion to that 50mm f/1.8. Sure there are faster versions out there, but this one fits! But the one thing that this lens doesn’t fail at is outdoor work; given the maximum aperture of f/3.5, I would not use it for low-light indoor conditions unless you popped a flash onto your camera, which might not be possible if you’re running an OM without the hot shoe attachment. With the lack of distortion, the lens is great for landscape and architecture work, and that wide-angle might even work well for street work or posed portraiture with an aim at environmental. The compact nature and low weight plus high-quality would make it a valuable companion on travel when size is a factor. I would have loved to have a whole OM-2n kit when I was in Europe back in 2015 I could have easily carried three lenses with me the body and kept the digital there as well with the camera bag I had on the trip.

The Low Down
Now the big question I’m sure everyone is waiting to hear is, will I replace the lens with something faster? Well, that’s an excellent question, good chance is that I won’t get a faster 28mm lens for my Olympus kit, but I do want to score a 24mm f/2.8 lens for something just that touch wider. On the used market you can get a copy of the lens for under 100$ with most ranging from 60-80$ and yes some examples are over 100$, but I wouldn’t pay that much for this particular lens. And sure there are some limitations but honestly those I can easily overlook for the price, size, and image quality.