If you’re of a certain age, your entire childhood was captured by a class of cameras that first showed up on the market in the late 1970s, the compact point-and-shoot. While the idea of automatic compact 35mm camera is nothing new, and the idea of the family snapshot as old as Eastman Kodak. But in the 1970s something new showed up on the market, autofocus. No longer did the photographer have to fiddle to get things in focus, autoexposure allowed for no thought to metering. The point, then press the shutter. Harkening back to the original Kodak, you press the button, we do the rest. Or shall I turn the phrase, you press the button, the camera does the rest. While the PC35AF is not the first such class of cameras, it certainly cuts an interesting figure when compared to the first two such cameras (the Konica C35AF and Canon Sureshot). And it seems to be the camera that has gained a bit of a cult following, despite being more a proof-of-concept than a completed camera overall, almost as if the camera was to ‘test the waters’ of the automatic compact market. 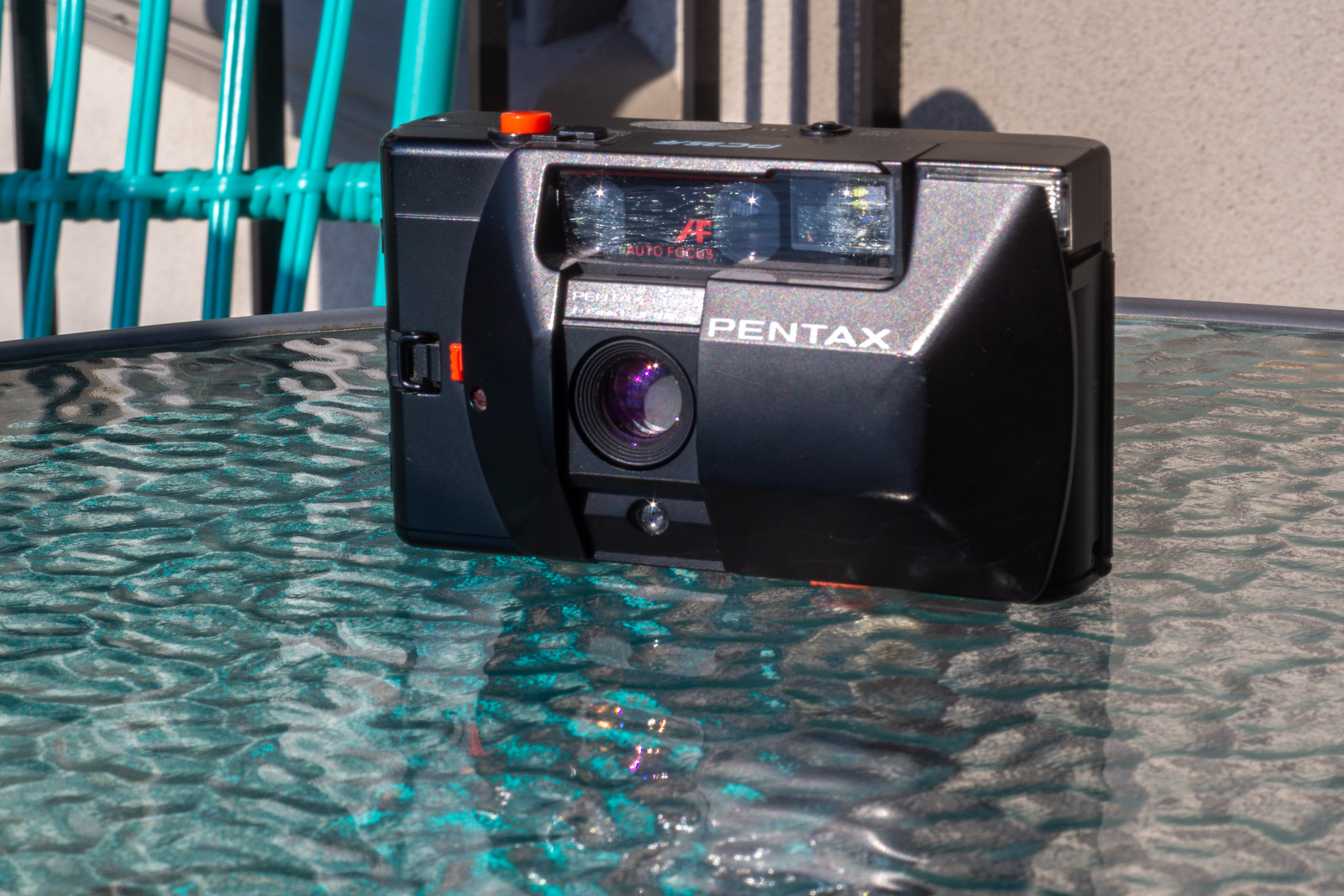 Background
The history of the PC35AF does not start with Pentax but rather Honeywell. Through the first half of the 1970s, the company began to develop a system for automatically focusing camera lenses. Honeywell named the system Visitronic, and it became the first passive autofocus systems. It operated with a pair of CdS sensors that used available light in two overlapping patterns that were aligned by an integrated microprocessor. Essentially an automatic version of a traditional rangefinder. In 1977 Konica’s C35AF became the first commercially available autofocus compact camera and used the Visitronic system. Canon would in 1979 release their own autofocus compact, the AF35M or Sureshot. Still, unlike the C35AF, Canon used an active autofocus system that operated with an IRED (IR Light Emitting Diode) and a photosensor to measure the distance and set focus. Canon’s active autofocus proved far more popular than the passive system. Pentax released their first autofocus system, the ME-F in 1981. But they also recognised the growing popularity of compact 35mm cameras. A year later they release the Pentax PC35AF, their first autofocus compact camera. Sadly they focused on the optics and the autofocus beyond that it proved far lower on the feature scale than similar cameras of the time. Pentax, like Canon, used an active autofocus system pairing it with a decent five-element 35mm f/2.8 lens. The outer shell takes a lot of cues from Olympus with the clamshell design, but far more angular that gives it more of a Minolta Maxxum 7000 look. The camera continued to use a manual film advance although a motor drive accessory was available. The camera proved popular, and in 1984 Pentax released a follow-up, the PC35AF-M which added the motorised film advance. Both the PC35AF and PC35AF-M included varients that imprinted the date onto the images. In 1985 an SE version of the camera came out, or Special Edition which had a handful of cosmetic changes. By 1986 the Espio/IQZoom line of cameras came out, and the PC line became Pentax’s low-cost line of compact cameras. The final models, the PC-3000 and PC-5000 coming out in 2001. On an interesting side note, through the late 1980s and 1990s, Honeywell took Nikon, Pentax, Olympus, Minolta, and Canon took to court over copyright infringement. Pentax settled in 1992 for a large sum of money and back payment of royalties.

Impressions
Overall the PC35AF is a sleek looking camera, doing away with a lot of the design cues of the other early autofocus cameras that tried to maintain some connection to the past designs with the lens barrels extending from the camera body. When it comes down to it the PC35AF has the look of the Olympus XA combined with a Minolta Maxxum 5000. With the clamshell design coming from the XA and the angular look from the Maxxum 5000, even the black with red highlights. The clamshell also acts as the camera’s on/off switch; a small red controller will open the shell, which is spring-loaded. A nice touch, but I find it a touch unnecessary. In fact, if you look at all the controls, any directly related to shooting are highlighted in red. The clamshell release, flash release and the shutter. The shutter is a big, red, and round. There are no hair triggers on the PC35AF; you must actively aim to press the button. The PC35AF also has self-timer lever around the shutter release, and an EV 1.5 backlight compensator button is also on the top. The biggest complaint I have is the dial film advance; the sharp plastic dial can be hard on the fingers in the cold weather. The ASA selector switch is right where you’d expect it, just under the lens and while only a handful of speeds are numbered, there are plenty of options with speeds between 25-400. Finally on the bottom of the camera is the film rewind dial. The surprisingly similar design cues of the PC35AF and the Olympus XA makes me wonder who actually designed the camera.

Experiences
While the camera certainly does look nice, it suffers from plenty of flaws in the actual photographic experience. The camera itself seems a touch incomplete and rough around the edges. Now, I’m sure that some of the negative experiences I’m going to point out in this review can be chalked up to age, but given that almost all versions of the PC35AF are getting old, it’s worth explaining. The camera loads like the Olympus XA, the back is opened by pulling down the rewind leaver, inserting the cartridge and winding it across. Then use the film advance dial, which automatically stops at the first frame. Overall operations are fairly hands-off as the camera functions in a fully automatic manner. The viewfinder is big and bright, a pleasant surprise for a camera of this type and age. Easy to see frame lines help reduce the possibility of parallax error and handy icons indicate where the autofocus is locked onto with the standard mountain, group, and one person. The one thing that you have to watch out for with the autofocus in dim light and bad weather. These two things will often trick the autofocus, which I found out after reading other reviews on the camera after seeing plenty of out of focus images on my test roll. The second is that the placement of the metering cell beneath the lens means that if you’ve got big hands or gloves on you’ll partially obscure the cell and throw off the exposure, again poor weather will also hamper the auto-exposure system. Because of these two things my test roll was a bust, thankfully the weather proved bright with good weather and the roll shown here turned out decent. When it comes to exposures that require flash, the camera will illuminate a green light above the viewfinder just in your peripheral vision, indicating that it needs flash. The one thing is that the flash is not automatic, you’ll need to manually power on the flash to get it working. And even then, it doesn’t always trigger either. I’m going to chalk this one up to the age of the camera. The biggest issue I faced with the camera is the film advance lock. Here’s where I figure it is more due to the age of the camera than a design flaw. It often took me several presses of the shutter release and listening closely for a ping of the advance lock releasing before I could advance to the next frame. Which, as you can understand, is a pain in the neck having to use so much violence to continue with the use of the camera. I ended up getting annoyed with the camera that I stopped shooting after only thirty frames of a 36-exposure roll, and even then, those last ten frames were murder. The rewind release button and rewind knob are on the bottom of the camera and are easy to operate, though completely manual. Pentax did produce a motor drive for the PC35AF, but given the issues with the advance lock, I’m glad I don’t have one, because it would have straight-up shredded my film.

Optics
Probably the brightest point for the whole camera to me is the lens. Like Olympus, Pentax went out of their way to include a five-element 35mm f/2.8 lens on their camera, something not seen on most other point-and-shoot cameras of the age. Both the Canon AF35M and Konica C35AF use a 38mm f/2.8 (4 Elements in 3 Groups). Even the Olympus Stylus and Stylus Epic didn’t have the same lens construction. The XA however, had a six-element design which does beat out the Pentax. But a five-element 35mm f/2.8 lens design is no slouch one of my favourite lenses for the Nikon system is a five by five design 35mm f/2.8 lens. The PC35AF, when everything works right, produces excellent images. They’re crisp, lovely contrast, and sharp. Even wide open, there’s little vignetting and when stopped down is sharp corner to corner. Although to be honest, I couldn’t tell you which images are wide open and which are stopped down as there is no feedback on the camera as to the exposure settings. Honestly, it’s a shame that Pentax did not carry on with fixed lens point-and-shoots with a higher quality optics past the release of the IQZoom/Espio line.

Lowdown
While I would not recommend a PC35AF, it’s not a bad camera if you find one in good working condition. Despite all its quirks, it makes for a nice desk piece and a bit of history in the world of photography. Thankfully, you can pick one up for under 100$ on the used market, but to be honest, don’t spend any more than 90$ on such a camera. And be sure you have assurances that it functions fully before spending the money on one. And you might want to get your hands on either the autowinder or the PC35AF-M version; it will make your life easier. But only if the advance release functions properly. Thankfully the one thing the PC35AF does not suffer from is the massive inflation that has hounded the compact market of late, which means that you don’t have to pay an arm and a leg if you want to get your hands on one. Despite having an overall negative experience with the camera, I wish I had a far better time working with the camera because despite the flaws it appears to have been a fun camera and certainly an excellent design and look about the camera. And the best part is the optics, a five-element 35mm f/2.8 lens is something you wouldn’t see on most cameras of a similar type in the compact market until the 1990s with the premium versions.