When it comes to 50mm lenses I’m a sucker for a fast fifty, and while I initially got the 50/1.8 (don’t worry, I will get that lens on the review table but not until next year). I couldn’t turn down the excellent price tag on the chrome nosed 50/1.4 when I was at Burlington Camera one day. While in some circles the early version (which I’m reviewing today) gets a bit of a bad rap due to the coating on the lens. But honestly, the coating just looks cool when hit with light and viewed at the right angle. Most will go for the newer multi-coated version with a cleaner coat, I’ve heard it on good authority that there is little difference between the two. While it is a larger lens than most other from the OM-System I find it well balanced and overall a joy to use and shoot. 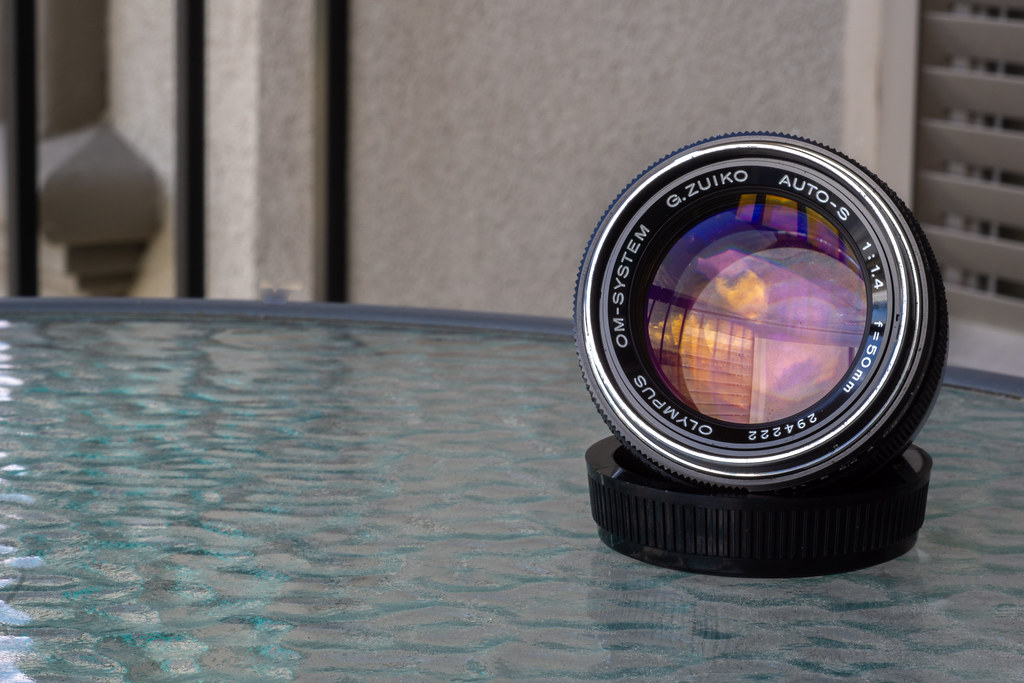 Build Quality
What surprises me about the Zuiko 50/1.4 is the size of it compared to the other primes I have for my OM kit, this thing is a beast. It sticks way out from the camera body and certainly adds good weight to the small camera system. But honestly doesn’t throw off the overall balance of the camera. The lens follows the standard pattern of Zuiko lens with a smooth aperture ring at the front of the lens, although the one complaint is that the clicks on the stops are a little too quiet. The focusing ring is smooth and large with good travel making it easy to grip. Despite the large aperture, the lens takes a 49mm filter, which makes it fit right in with the rest of my OM glass so I don’t have to carry multiple filter kits. Although probably the prettiest part of the lens is the coating, it’s totally different from all the other lenses in my OM kit. And you can see why I like it so much in the beauty shot, catching that early morning light on my balcony with all sorts of great colours created. But it’s the coating that also lends it to the budget nature of the lens, most people will go for later models, specifically the MC version. But I have never had an issue with the coating on the lens and it performs admirably with both black & white and colour films.

Image Quality
One of the first things I noticed about the 50/1.4 that I’ve seen in the other two 50/1.4 lenses I’ve reviewed so far is that when shot wide open there’s no vignetting in the corners, even when shot wide open at f/1.4. Although you have to be careful and nail that focus as the depth of field is narrow. Also, it doesn’t produce my favourite, that narrow depth of field doesn’t produce as sharp an image, but in the right conditions can be interesting all the same. You start to see improvement by the time you get to the f/2 stop and beyond with the sweet spot being between f/5.6 and f/16. There isn’t much in the way of distortion in the lens, but if you do get too close you will start to see it slightly in your straight lines, despite having that close focus capacity that distortion makes it a bit annoying when you have a close subject. Not one to use for close-up portraits. The one thing I do notice with this lens is that it lacks that ‘snap’ that I’ve found with other Zuiko lenses, such as the 50/1.8 chrome nose, along with the previously reviewed 28/3.5 and 35/2.8. Again, not complaining, sharpness it overrated but if you’re looking for that snap, this lens is certainly not to for you. The coating is the weak point in this lens, now I did not notice anything detrimental to the images because of it but also shooting mainly inside I noticed no unwanted flares or removal of image quality that I could chalk up to the coating. But I don’t discount that, it might have problems handling colour film and hard direct light under some conditions. I’m not one to wax poetic about the out-of-focus rendering of a lens, but I do have to say that of all the Zuiko lenses, I’m rather fond of this one, not because it doesn’t any strange or out of the ordinary. The rendering is smooth and natural-looking and makes for a great portrait lens.

Applications
Like any standard lens, the 50/1.4 gives you that ‘normal’ field of view and makes for a solid addition to any carry around the kit. While the chrome nose is both bigger and heavier than the rest of the lenses I have for my OM kit, having those smaller lenses means that the 50/1.4 doesn’t add too much. This lens is the perfect addition to a travel kit or as a general carry around lens when out on a photo walk. For indoor work, the fast aperture allows for low-light shooting without a flash. The large aperture also makes it great for portrait work when you need that separation between subject and background. And with the close-focus capabilities, it does a decent job as a poor-mans macro lens, although don’t expect it to give you the same results as a dedicated macro lens.


The Low Down
While there are certainly newer and ‘better’ versions of this lens out there, there’s nothing wrong with the chrome nose if lens coating is not an issue and you want to add a fast fifty to your OM kit, then the Zuiko 50/1.4 makes financial sense. You can find these chrome nosed lenses for under 100$ online, and even the non-chrome nosed version can be had for around 100-150. But once you get into the Zuiko MC version (Multi-Coat) you’re getting into the 250$ range on the used market. Now I have never done a head-to-head between the chrome and MC versions (I could if I borrowed another OM-2n and lens from brother Bill), so I cannot speak to the difference between the two but I have never had an issue with the Chrome version and I’ve even shot colour on the lens and got stunning results. And while you don’t hear it often, this is a fast fifty on a budget, and well worth your time if you can find one.