I’ve quickly learned over the three previous reviews of Olympus lenses that there is a certain polarization when it comes to Zuiko glass. In most cases, Zuiko glass is well received by those who use the OM system. But only some lenses and those are usually the ones that fetch the highest price on the used market. And then there’s this lens. Now I’m only recently starting to make more use of zoom lenses, and I have the Minolta Maxxum system to thank for it, so if this review seems clunky, it’s because this is the first zoom lens I’ve reviewed in this series. The Zuiko 75-150/4 at some point in the recent future received a bad review online or as another site mentioned, not uniformly positive. And I can see where these folks are coming from, mostly they’re shooting on digital cameras through an adapter, also the lens is a single-coat so performance is reduced and an increase chance of flare (there is a built-in hood) and there are some discussions around sharpness. Also lack of contrast when shot wide open. But I love an underdog lens, so let’s dig into this optical quagmire. 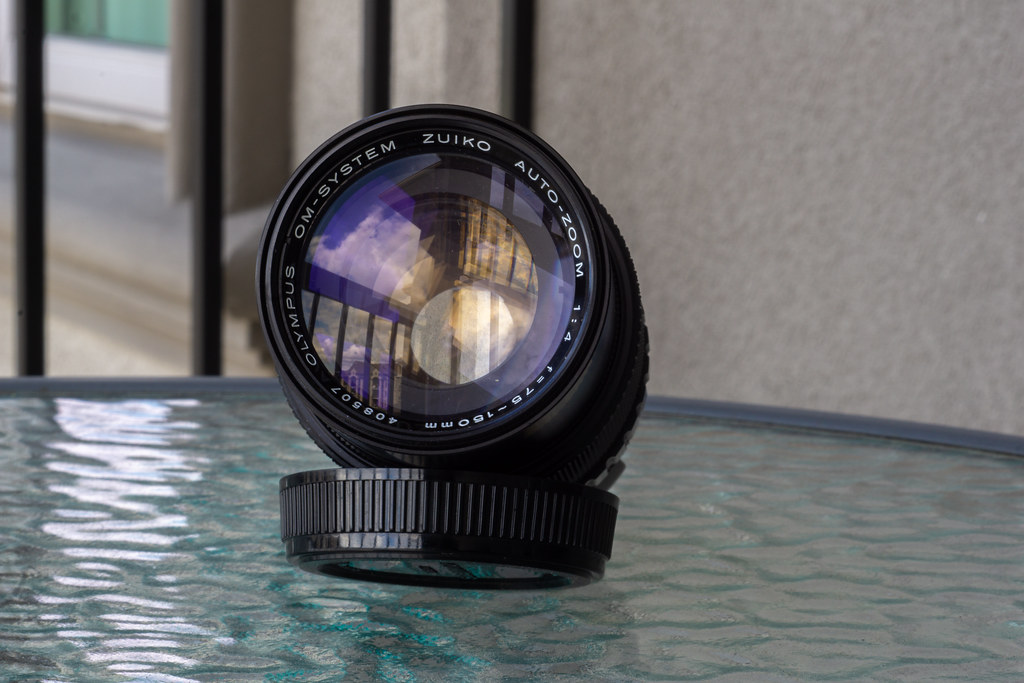 Build Quality
When it comes to the lenses for the OM system I’m used to fairly compact glass. Small, almost pancake-style lenses allow you to easily carry several different lenses without taking up too much real estate in your camera bag. The 75-150 is by no means a small lens, but it’s also not the largest zoom lens of this nature that I’ve ever worked with. One of my first zoom lenses was a Kiron 75-150mm f/4 that I got with my Minolta SR-T 102 and it stayed with me into the X-7a. The Kiron was a beat of a lens next to the Zuiko and the massive Vivitar Series 1 I have for the OM-System is even bigger. This puts everything into context, meaning that the 75-150 Zuiko is not that big of a lens. The lens is a solid build, all-metal, a 52mm filter size and a built-in lens hood. There are two control rings a smaller one that controls the focal length that is stepless but has marks at 75, 85, 100, 120, and 150 marks. The focus ring is wide and smooth but has a long travel, not exactly ideal but the smooth operation makes life easy. While the focusing does change the lens length, the zoom features are all internal. And that is one of the key things I like about the lens is that despite being built in an era when push/pull style zoom lenses remained popular, Olympus bucked the trend and went with a twist style zoom control. The other issue remains the coating, use that lens hood to help that and also check the location of the sun relative to where your subject and composition is, it might help reduce the amount of flare and contrast issues.

Image Quality
There is probably some truth to the downsides of this lens. One of the first things I noticed is that at the 75mm mark, if you focus too close there is a bit of distortion on your straight lines, it’s not overly noticeable but it is there. I am unsure at which point that the distortion goes away, but it is gone at the 150mm mark. With the lens wide open at f/4 there is a loss of contrast, and fall off at your corners. This falloff is noticeable at f/4 and remains in place at the f/5.6 mark and by f/8 it is gone. When it comes to the lens’ sweet spot I would stick that between f/8 and f/22, which can be annoying with a telephoto zoom lens, but you can’t do much about it beyond getting a different lens. When it comes to image sharpness, I wouldn’t rate this lens as the best, especially at those first two apertures f/4 and f/5.6, although sharpness has improved by f/5.6 over f/4. By f/8 the images sharpness is close to what I would expect from other Zuiko lenses. The out-of-focus areas are smooth but fairly vanilla, nothing overly exciting. This is not a lens that loves being shot wide-open so if that’s your standard way of shooting, this might not be the best lens.

Applications
The one thing I’m missing in my OM-System is a short telephoto lens, a 100, 105, or 135. Sadly while many lenses in the OM-System can be had for an inexpensive price, the short telephotos are in demand and carry a premium in the used market. But I can see myself forgoing adding one such lens to my kit for the time being as I do have this lovely zoom lens. Excellent addition to any travel kit, while I wouldn’t use it for street photography on the fly, posed street portraits or portraits, in general, would be an excellent use of this lens, just add that extra couple of stops to f/5.6 or f/8 to improve your image quality and help get that whole subject in focus. I can also see this for nature work and landscape with the f/22 aperture as well as detail work in architecture. Although give the short maximum focal length of 150, it wouldn’t be my first choice for sports or wildlife photography. But I can see it working well for outdoor events, the f/4 is a little slow for working indoor but the addition of a flash will certainly help give the needed light or some fast film and push developing.

The Low Down
I would recommend this lens, providing that you’re shooting the glass on a film body. I think much of the malalignment of the lens comes from those who choose to adapt the lens and shoot it on digital cameras where you’re starting to see that loss of contrast and poor image quality when opened right up. But I cannot fault the lens for being designed for a film camera being shot on a modern digital. And the best part is because of all the bad reviews you can pick up one of these for a low cost on the used market. While there are some outliers with expensive versions, most are running for under 100$, look for one that has a cost between 50-80$ to ensure that your copy is decent. But you can find ones that are cheaper that are probably as good, but best to ask a few questions before dropping cash.