I always seem to want to come back for more. One of my first experiences with a Soviet camera was a Smena 8m, this was a gift from my good friend Michael Raso, and the camera was interesting, to say the least. There wasn’t anything bad with it; it was pretty unique and produced excellent images. It was hard to work with, too much to do, too fickle, and I wasn’t getting to know the camera well enough. So I passed it onto another photographer who went on to use the camera to produce awesome results. There wasn’t anything wrong with the 8m; I think the problem was me. Since then, I have gotten much better with these cameras, knowing their quirks and letting me know what they like to do. The saying is try, in Soviet Russia, the Camera tells the photographer what to do. I’ve since found two excellent Soviet cameras for my kit, the Zenit E and Lomography LOMO LC-A+, which technically isn’t Soviet, but it is made in China so, close? So when a Smena Symbol showed up at my door, I was not about to turn down the refined Smena 8m; this humble camera has all the things you liked about the 8m, but with a far better user experience. 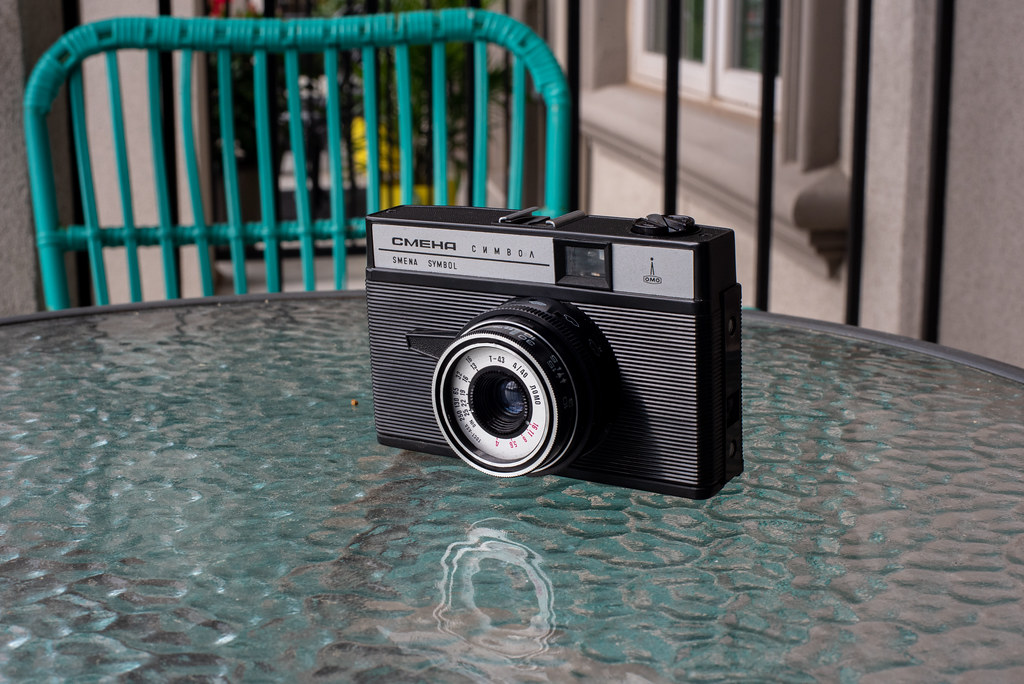 Background
The Smena or Смена line of cameras are ones designed by GOMZ (Gosudarstvennyi Optiko-Mekhanicheskii Zavod) is the oldest optical equipment producer in the USSR for the youth market. The idea was to produce a simple 35mm point-and-shoot viewfinder camera to encourage the next generation of photographers. The first model, the Смена came out in 1953, a zone focus bakelite bodied camera using a simple triplet design T-22 40mm f/4.5. The second version, the Смена-2 came out in 1955 was the same camera as the Смена but added flash synchronization. These cameras both proved popular that in 1958, GOMZ released updated versions, the Смена-3 and Смена-4. These both featured a redesigned film advance system, and the 3 has a self-timer and flash sync. But problems in production saw the 3 and 4 face reliability issues, and production ceased in 1960; the original two models continued until 1962. The same year, GOMZ rebranded to ЛООМП (LOOMP) Leningrad Optical and Mechanical Association. That same year, they redesigned the Смена line and produced two new models, the Смена-5 and Смена-6. These new models now used plastic rather than bakelite in the body construction and far sleeker body design, and a large dial-type film advance. The difference between the 5 and 6 came with the lens, the 5 using a T-42 40mm f/5.6, and the 6 used a T-43 40mm f/4 lens. The new models were a hit, and ЛООМП began to think of the export market, much like the KMZ Zenit E had started to bring in much-needed currency, the Смена-8 was designed for the export market and came out in 1963. The Смена-8 or Smena-8 was also available as the Cosmic 35, or Global 35 used the same basic design as the Смена-6 including the T-43 lens but used a standard take-up spool rather than a cassette that was found in the 5 and 6. In 1965, ЛООМП took on the more familiar brand ЛОМО or LOMO (Leningradskoe Optiko Mechanichesckoe Objedinenie). There were several other Смена cameras produced, with the Смена-9 being the last to use the new body style. In 1967 the Смена-11 introduced a new box styled body, which ЛОМО would re-release the Смена-8 in the new style, the Смена-8m. There are no differences other than the visual look between the 8 and 8m, and the popularity only grew with over 21,000,000 units produced. But the 8m had plenty of functional flaws such as the weight, two-step film advance/shutter cock, an awkward rewind, and a tendency to have the camera shake thanks to a rough shutter release. To address these concerns ЛОМО released in 1973 the Смена Символ or Smena Symbol. The Символ was also sent to the western markets, as the Cosmic Symbol or Revue 135 Symbol. While basically an improved 8m, the Символ used a combined film advance/cocking lever mounted on the lens barrel, a traditional hot shoe and film rewind knob. The Symbol brand came from icons indicating weather conditions for setting the shutter speed, apertures linked to film speed and focus icons for setting your focal point. Traditional numerical indicators are located on the bottom of the lens barrel regarding the shutter speed and focus. The Символ never achieved the same popularity as the 8m, but still saw over 10,000,000 units produced before production ceased in 1993. It should also be noted that the 8m continued production until 1995.

Impressions
If you’ve worked with a Smena 8m before, the Symbol will be a familiar camera to work with; while it retains much of the classic shape, there have been several changes where they count. The camera maintains a similar weight and size to the 8m, with the lens and viewfinder being in the same place. But there are some notable differences in the positioning of the controls. The first thing is that the shutter release has been relocated to the lens barrel, a rather long release, but it is comfortable shooting and holding the camera. And there is a decent weight behind the release. Honestly, I’ve never seen a configuration like the one on the Symbol before, and I like the layout. The film advance is in the traditional spot on the camera’s back and acts both to advance the film and cock the shutter, no more two-step. Exposure controls are on the lens proper, with the shutter speed noted in symbols on the top of the barrel and traditional numerical designators on the bottom. Your apertures are located on the front of the lens, tied to film speeds, and include traditional numbers. The rear door is a bit more stand out from the camera body, which threw me at first. The door uses a traditional latch, and the rewind button is on the bottom and a traditional rewind knob.

Experiences
Despite being a better camera than the 8m, the Symbol is not without its flaws. The first is loading the film; the take-up spool in the Symbol is not what I would call normal. Usually, there’s something to hold the film in place or a spot to insert the tail. These are not present on the Symbol or have fallen off in the case of my copy. After a bit of work, I did find a small claw that will grab a sprocket hole and pull the film along, but only when the back is closed. After reading the manual, I cannot match what I see on the camera with the manual. I did have some issues with frame spacing throughout the roll despite adjusting the tension. I will also note that the frame counter was also not working in my copy; no big deal, only an annoyance. Once out in the field, the camera worked okay. The never-ready case added a much-needed strap and made it comfortable to use in the field. The shutter release and advance worked smoothly and certainly helped with being speedy. The viewfinder proved handy in framing up shots; while not a perfect match, it does allow you to get a general idea. The camera itself is a guess or zone focus, but if you’re shooting wide with stopped-down apertures, you won’t have too much difficulty. But again, an external rangefinder might help out if you’re not totally comfortable. The rewind button does not need to be held down to handle the rewind, although mine is a bit rough on the rewind, so I’ll chalk that up to age/build quality. The camera has no means for metering built-in, so you’ll need to use Sunny-16 or an external meter. In my case, because there’s a decent hot-shoe, I went with my ReveniLabs hot-shoe meter, which did an excellent job. The only problem is that the camera’s shutter speeds are off.

Optics
If there is one thing that the optical designers a LOMO were excellent at was a good performing triplet lens. And one of the biggest things that I always loved about the 8m was that T-43 lens, which first drew me back to the Smena Symbol. While not particularly fast at f/4 and a 40mm fixed focal length, it offers up an excellent lens for regular shooting and primarily for outdoor work unless you want to balance a flash on the camera. Optically, the lens has many characters with fall off and vignetting at the corners at the wider apertures, but that goes away when you stop it down. There’s also a lovely swirl at f/4 in your out-of-focus elements especially rendering complex backgrounds. But once you start to stop down past f/8, you lose that character but end up with solid, sharp images.

Lowdown
Like any Soviet camera, buyer beware, these weren’t built to Western standards of quality, but you do get a camera that is easy for you to learn repair work. In my case, I think the shutter is a bit off, but I was able to recover some of these images easily. While initially unsure, I’m rather happy with the Smena Symbol; it gives me everything I liked about the 8m but none of what I didn’t like. On the used market, the Symbol will run you between 30-70$, but if you are spending that upper prince mark, it might be best to ensure that the camera is functional, tested, and maybe new seals added. While the camera isn’t for everyone, if you’re comfortable with manual metering, zone focus and a bit of uncertainty, the Smena Symbol is a solid choice to expand your Soviet camera collection.