I’ll be the first to admit, the relationship between me and Soviet-built cameras has been a rocky one. My first experience with Soviet cameras was with the Zenit B (this camera’s meterless cousin), it’s lack of automation was my downfall. Next a Zorki 4 with a pinholed shutter curtain, the Keiv 88 wasn’t too bad. I had excellent shots with a Fed-2, and a tonne of problems with a Smena 8m and I don’t even want to speak on the Zenit 122K. But after hearing James Lee (who loaned out this camera originally for review, I have since purchased my own) talk about how great the camera is and well I was sold. The Zenit E is a camera I could get behind, solid, well built, and simple to the point where little could go wrong that couldn’t be fixed. The E became a stalwart addition to my camera kit, and while I don’t use it regularly, it is already ready for a Soviet Camera event. Special thanks to James Lee for loaning out the camera originally and Stephen Dowling and Mike Eckmann for inspiring me to redo this particular review and having a detailed history of helping expand the review. 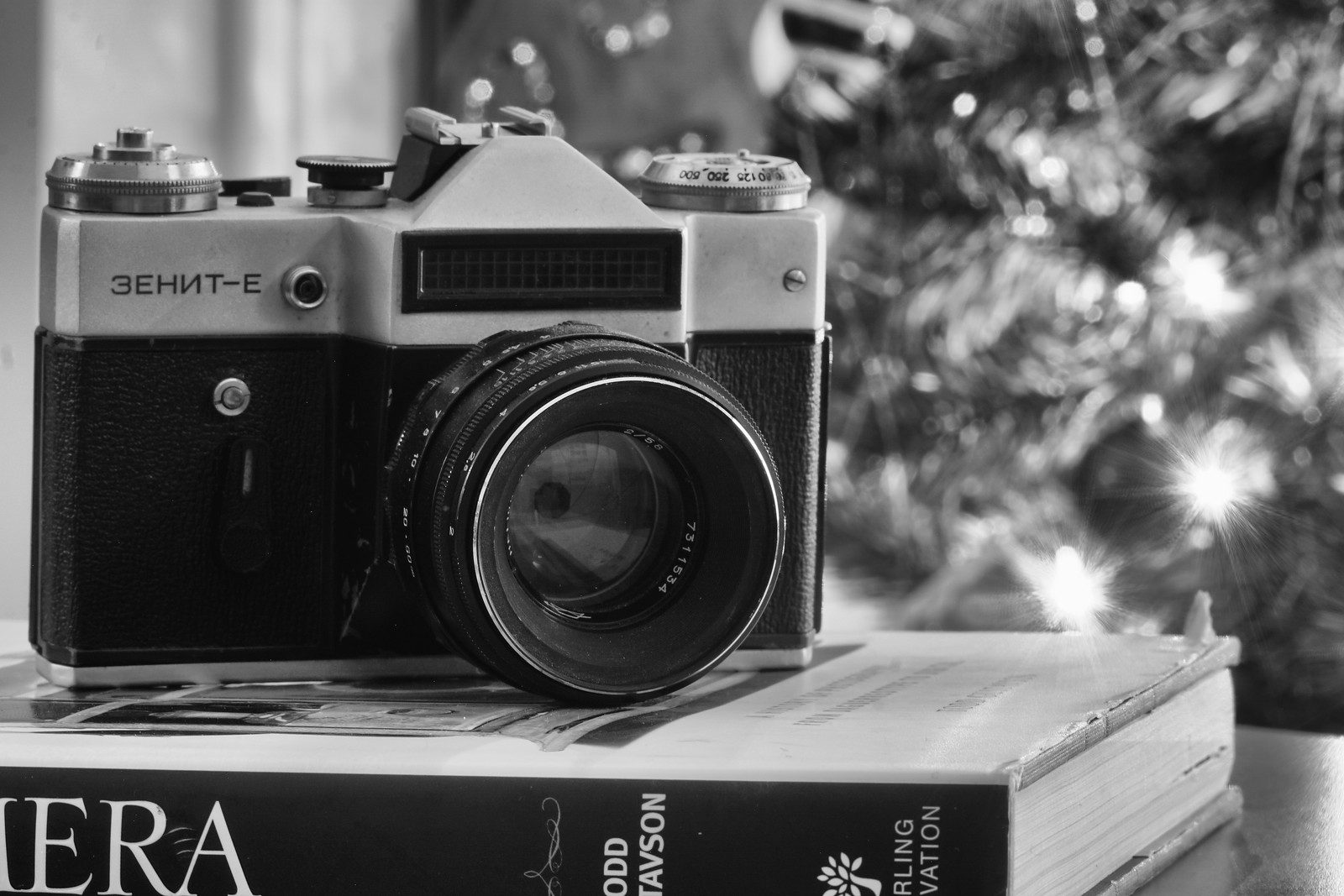 Background
As with most cameras produced in the USSR, the Zenit E can trace its heritage to the FED rangefinder, a copy of the Leica II. The Красногорский механический завод (Krasnogorskiy Mechanicheskiy Zavod) Krasnogorsk Mechanical Works, (KMZ) factory established in 1942 would protect the Soviet camera industry, primarily lens production during the Nazi invasion of the Soviet Bloc during World War Two. And while the Nazis did get their hands on and used the FED factory, it was KMZ that got the last laugh when many parts, equipment, and designs from Carl Zeiss in Jena were transported to KMZ in 1945 during the Soviet invasion of the Third Reich. KMZ would also produce copies of the FED rangefinder and after making some changes put their branding on the camera, the Zorki. But KMZ knew that the future did not belong to rangefinders alone and began modifying the Zorki to become an SLR. The Zenit, released in 1952. The Zenit retained the bottom loading, shutter, film advance, film rewind, and M39 lens mount from the rangefinder. But the centre hacked out to house the mirror box and prism finder. Minor updated were made in 1955’s Zenit C such as a different mirror pull and the addition of a flash sync port. Further improvements resulted in the Zenit 3 released in 1960 which replaced the film advance knob with a more familiar leaver. The Zenit 3 is hailed as a significant success with elegant control design. It’s replacement the Kristall in 1961 less so but did introduce the idea of a hinged door at the rear of the camera for film loading rather than through the bottom. KMZ returned to a more familiar design with the Zenit 3M in 1962 but retained the rear-door film loading and film advance design. The 3M remained a popular camera. And produced in great numbers even after the release of the Zenit E, the 3M remained in production until 1970. KMZ also released a series of numbered leaf shutter SLRs with production running from 1964 to 1968. When the Zenit E hit the market in 1965, it marked several significant departures. First, the lens mount had been replaced with the far more popular M42 mount, mirror return capability was added, and the overall design changed to be far more practical and brick-like than the art deco styling of the earlier models. KMZ also included an uncoupled match needle selenium meter. Even in 1965, the Zenit E fell far short of the other contemporary cameras of the day that had slow shutter speeds and automatic aperture control. The E lacked both these things, but its simplicity is what made the production easy and the ethos of being able to be easily repaired. No clockworks to drive slow shutter speeds or electrics to run hot-shoes or CdS meters. And KMZ even had a meterless version produced the Zenit B. When KMZ completed their automatic die-casting machines the production of the Zenit E ramped up to full tilt, add to those other factories in the Bloc producing the camera it soon became popular not only in the USSR but also outside of the Bloc. Other companies either bought and rebranded the Zenit E or produced their own under license. Such names as Kalimar, Revueflex, Titan, Prinzflex, Cambron, Cosmorex, and Spiraflex were all direct copies of the E. Not only did it show off the power of the Soviet camera industry it brought in much needed hard currency into the Soviet Bloc. And while KMZ introduced several upgraded versions, the E remained in production. The Zenit EM introduced automatic diaphragm control in 1972, the Zenit TTL in 1977 had TTL metering. But in 1980 it was the Zenit E that got the special Moscow Olympics branding. An attempt at modernization in 1981 with the Zenit ET. By the time production ceased on the E in 1986 it is estimated that some three million units had been produced. And even after that, the M42 was maintained in Zenit SLRs well into the mid-1990s even though they had K-Mount cameras available.

Impressions
The camera is a brick; there’s no denying that. But I have to say I own no other camera that even comes close to how the Zenit E looks. It certainly stands out on my camera shelf among other SLRs, some even contemporaries of the E. It is heavy, simple, and has an odd sense of Soviet efficiency. My particular version was built by the Vilejka factory, which isn’t known for top quality cameras. But mine functions perfectly, save the meter. Everything about the camera is heavy from the body. It is ill-balanced with short lenses, the film advance requires effort as does the shutter release. But if you know how to use an SLR, the E is not much of a stretch. But you do want to carry the camera on some sort of strap. I’ve hand-held it only for an hour and my arm hurt. The rewind is tedious because the actual knob is hidden, and using the meter (if it worked) would be a pain. Also, make sure to watch the shutter speeds, you need to ensure your camera is cocked before changing them.

Experiences
If you have never used a Zenit E and have no experience with an all manual, and I mean ALL manual camera, then you will have a terrible time with the E. Mounting the lens is easy as there is no trick, just screw it on and keep it tight. Loading the film is equally easy as it uses rear-door loading. But there the ease ends. The meter, if you have a copy that works, is uncoupled. You use controls around the rewind knob to use the top-plate match-needle, then translate the aperture and shutter speed settings to the camera and lens. The shutter speeds are limited to a minimum of 1/30″ and a maximum of 1/500″ there’s also a bulb setting. Also, you need to ensure that the shutter is cocked, a throwback to the Zorki rangefinder days, if you don’t, there can be catastrophic damage to the shutter. The aperture is controlled directly from the lens, and you do have to stop the lens down manually. Now if you keep the lens stopped down, you will have a more challenging time focusing. The focusing screen is rather dim, so even when you stop it down even to f/4 or f/5.6, the dimness is unbearable even in bright conditions. That or my copy has a dirty viewfinder. Of course, you have to remember to stop the lens down or blow out your frame. The film advance is a long one, and heavy. As is the shutter release but the shutter sound and mirror slap are rather satisfying. Rewinding the film can be awkward as the rewind is a post rather than a knob. At least the knob pops out from the body making it slightly less uncomfortable.

Optics
Switching to the M42 mount was the best choice by KMZ, it opens up the camera to a wider number of lenses out there and not just Soviet lenses. There is a 90% chance that your Zenit E will come with the iconic Helios 44-2 58mm f/2 lens that is highly sought after by mirrorless shooters, but if it doesn’t don’t worry about trying to find one at a reasonable price. Having that M42 mount will allow you to use your favourite Takumar, Carl Zeiss, Industar, and more on the camera with ease. Just know that you might need to disengage the automatic diaphragm control to prevent damage to the camera or lens (or both), and don’t forget to stop down before actually taking the shot. The best part is that there are tonnes of M42 lenses out there than can be hand for cheap on the used market and even some quality Takumar and Zeiss lenses are highly affordable, so you aren’t spending more on your lenses than you are on the camera body. It’s a Zenit, not a Leica.

Lowdown
Seriously, if you want a genuinely Soviet camera, a camera for the people, then the Zenit E is your camera. They can be had for a low price and will often come with that Helios lens. Plus there is a chance if you find the right dealer (in eastern Europe and the former Soviet Bloc) you might even find one new-in-box. These cameras will easily outlast you if you get a good copy, while deadly simple, they can be an enjoyable break from the more advanced cameras from Germany and Japan. And I can honestly recommend the camera to anyone looking to try Soviet camera then the E is a good camera. Another good use is to learn a little more discipline or just want something different for your M42 lenses. And of course, if your breaks, just buy another one, they are cheap as chips.