When it comes to the name Velvia, most photographers will often latch onto the cult classic Fuji Velvia or its modern form, Velvia 50. But Fuji also released a one-stop faster version, Velvia 100 or 100F, which offers everything you like about Velvia 50 but in a slightly faster form. While I’ve shot plenty of slide films, Velvia 100 is one that I have far less experience with; again, I’m more likely to shoot Provia, Ektachrome, or Astia (RIP) when shooting a 100-Speed slide film. But Velvia 100 is an interesting animal and one that I’m not likely to shoot again. So I wasn’t too put out when on the 8th of March 2021 that Fujifilm announced the discontinuation of Velvia 100. The reason for the discontinuation of both the sale and commercial processing of Velvia 100 in the United States due to the presence of the chemical phenol, isopropylated phosphate, sources at Fujifilm state that 0.0003% trace amount of PIP is contained in the layers of the film, but even that trace amount has resulted in the discontinuation of the film stock in order to comply with the Environmental Protection Agency. While this announcement does seem to only affect the sale in the United States, but I will continue to monitor and update as needed. 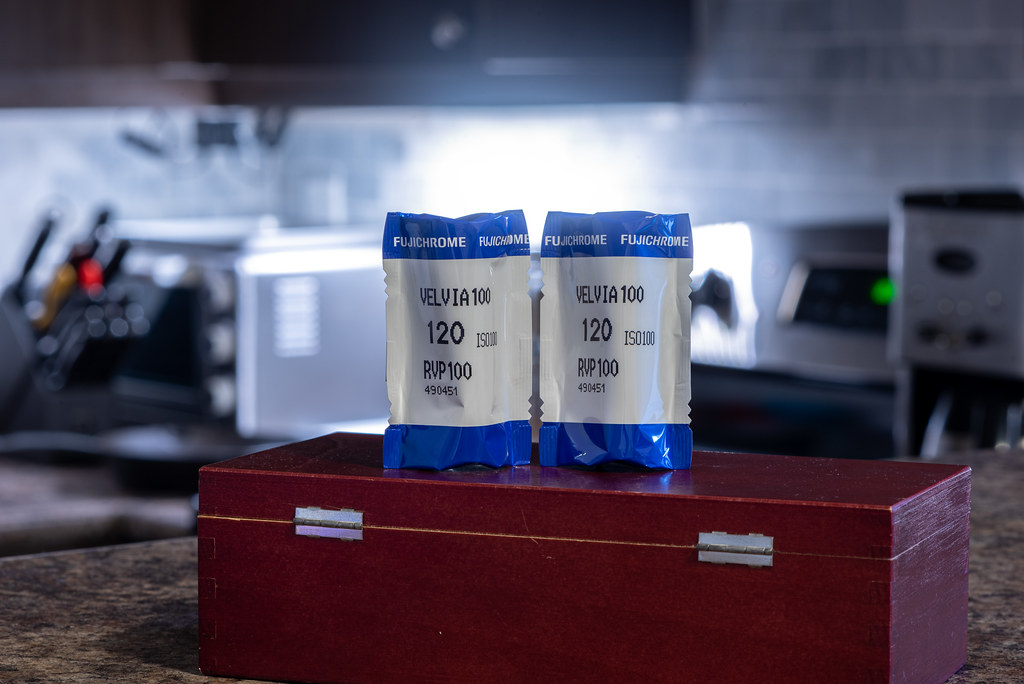 Colour Rendition
If you liked how Velvia 50 rendered colours but were turned off by the slow speed, Velvia 100 might fit your photography style. The colours are rendered in the same rich saturation and high contrast manner. Your blacks are deep, and whites are bright. The film does tend to lean into the warmer tones, so the reds, greens, and yellows, so that is something you’ll need to watch for when digitizing your slides. While not as rich as Velvia 50, Velvia 100 works as hard to bring you a good 95% of the slower film stock. You could probably do well with landscape and architecture work with these colours, but portraits are well within the realm of possibility with various skin tones, but again, it wouldn’t be my first choice.

Image Quality
Suppose there’s one thing that Velvia 100 doesn’t lack in image quality. Honestly, I could not tell the difference between Velvia 50 and Velvia 100 at a glance. Velvia 100 offers up clean positives, with excellent edge sharpness and separation of colour and tones. And it does have a good fine-grain; you have to zoom in close to catch your first glimpse of grain. This helps make for clean scans and excellent projection. And that is what makes Velvia 100 edge out Velvia 50 slightly; it projects far cleaner and provides a much better visual image on a screen with even a dimmer projector bulb. Like any slide film, you have to watch your exposure; there’s little in the way of latitude, so to get the best results, you want a good meter, either external or internal, because any over/underexposure or hard contrasty light will make your life miserable.

Scanning
Like most slide films, modern scanners do struggle a bit with Velvia 50 and Velvia 100. And I was nearly pulling my hair out when scanning the two rolls of Velvia 100 using my Epson V700. Unfortunately, I could not get a roll of the stock in 35mm to see how my Nikon Coolscan V handled the film stock. Because of the deep contrast and hyper-real colour rendering, both the Epson scanning software and Adobe Photoshop had trouble locking onto the levels and colour balance using any automatic tool. Most of the time, I ended up having to take care of these manually, which is always a struggle in my post-processing world. Like any slide film, you do have to expose them properly, and in a couple of cases, I think my exposure was off slightly, which with the latitude of a stiff board, can cause problems. I found that the software tended to overcorrect towards greens and cyan, and with a bit of fine touch, I could correct them. Thankfully the film did not scan with too much aberration and required little additional sharpening and colour noise reduction.

Overall Impression
There’s nothing wrong with Velvia 100; it’s a good film that will deliver excellent images in the right conditions; in fact, I would have to say that I would prefer to shoot Velvia 100 over Velvia 50. That little extra stop of film speed does help while still delivering the same image quality and colour from the Velvia series. But like those films, Velvia 100 requires an exacting exposure, so either make sure your handheld meter is calibrated properly, or your internal meter is dead-on accurate. And it also helps to have a good hand at colour correction in post-processing or a superb scanner and software that handles colours like a boss.