Being in North America and raised on Kodak and Ilford developers, I did not even know that Atomol existed, other than seeing it listed on the Massive Dev chart and just passing it by as another European developer. But when I was hunting for more Rollei developers at Freestyle, I came across Atomol 49 as an ‘other people purchased’ listing. I was excited to give this a shot, and after mixing it up, I posted in a Film Photography Chat group on Facebook and asked if anyone else had used the stuff. The response was overwhelming how many people used the stuff. However, the best was from Cheyenne Morrison, who sent me a whole pile of information on the stuff. Adox Atomol 49 is not a new developer and not even originally produced by Adox. It is originally an Agfa product. When World War Two divided Germany there also ended up being two Agfa factories, one continuing under the name of ORWO in 1964. Originally named Atomol and Atomol F before the war, the formula had a slight change after the war and took the name Atomol 49. ORWO and other companies continued to produce their own versions of Atomol known as A49, ATM49, or A03. And like a lot of Agfa chemistry it was picked up by Adox in the 21st Century the formula being nearly identical to the original Agfa/ORWO formulation. What I found is a developer that checks all the boxes for me, it’s reusable, does a high volume of films per litre, is compensating, fine-grain and sharp. 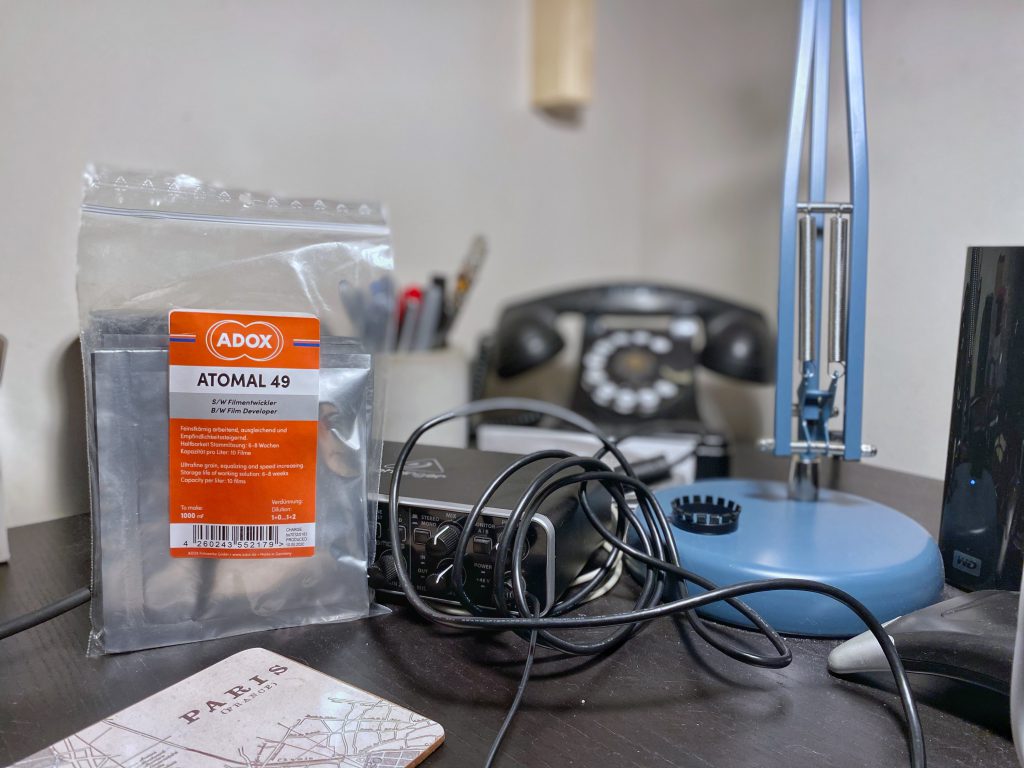 Handling
If you’re already used to mixing up powdered developer, then Atomol will be a breeze to mix up. Now unlike developers like D-76, this is not an all in one pouch. Atomol comes in three separate pouches, each labelled A, B, and C. Now it is important to mix these in order with 900mL of water. Mix each pouch in until it is totally dissolved then top up the full 1L. Thankfully you don’t have to overheat the water as you mix it between 20-26°C but don’t have the water hotter than 30°C. The good news about these temp values is that you can start using it right away. Although I usually let my freshly mixed developers sit for about a day before using. In actual use in the lab, you’re going to be working with the stuff in either stock solution or diluting it down 1+1 or 1+2. Your one-litre bottle will developer ten rolls of film without any dilution. Your stock solution is not long-lasting, with a full container, unused last for six weeks. Thankfully, I could use my standard agitation pattern, constant for the first minute then five inversions every minute.

Applications
One of the first and best applications for this developer is with high silver content films. Think Adox Silvermax and CHS 100 II or if you’re lucky to have some leftover Efke or OG Adox films. And I can say, that Efke sings in Atomol! But don’t limit yourself to those films, modern emulsions work like magic, both traditional and cubic grained films. And it seems that speed doesn’t matter. The sweet orange is 100-400 but again, being a compensating developer you can easily push and pull, and I did that with Fomapan 400 earlier in the year shooting the stock at both 200 and 400 without any trouble. And a developer that can make Fomapan 400 sing is solid in my book. But it also runs well with FP4+, Acros TMax 100, HP5+, TMax 400 and Tri-X 400, all films that I count as among my favourites, and Atomol makes me love the films all the same. Besides general-purpose development, Atomol would easily fit it with shooting in a historical context, being a developer that can trace its history back before the war, like D-23. It works well with classic film stocks and provides a classic look. I can see using this with Fomapan 400 through the Contax IIIa or Rolleiflex during a WW2 event would make for amazing shots.

Qualities
Probably the strongest quality that you get with Atomol is the dynamic tonality that it delivers. It is across all films, Efke, Acros, Tri-X, HP5+, and TMax 100 that I shot for this review but also found it with Fomapan films 100, 200, and 400. And that tonality comes from the developer’s compensating nature, which means that if you combine the developer with a film with a lot of latitude and forgiveness means that you can take full advantage of those even in less-than-ideal lighting or metering mistakes. When it comes to grain and sharpness, the developer handles both with ease thanks to the two developing agents, Phenidone which we know with Rodinal gives you that sharpness, while Hydroquinone keeps the grain tamed. And it does a wonderful job at both when combined with a film that already has that fine grain and sharpness, but even in films not known for that, I’m looking at you Fomapan 400. I noticed right off the bat that the grain on Fomapan 400 even at ASA-400 is far less than what you would expect.

Lowdown
Atomol is the film developer that you didn’t know you needed. And when I was initially shooting the film to try out Atomol for the first time, I purchased a new batch of film to keep using the developer throughout the ongoing 52-roll project and for my first all Adox film review (Silvermax). While not readily available in North America in most photography stores you can order it online through Argentix.ca, but you can also order through Freestyle Photographic for US readers. But the best way is to order directly from Adox through their Fotoimpex storefront. But if you want to save some money on the stuff, eBay is the way to go as there is still plenty of the ORWO stuff floating around online and in a sealed pouch will last for a long time, even the Cold War-era stuff. If you’re a little concerned about age, I’ve been assured that it will still work from a trusted source. So if you’re looking for something different or have a huge stash of Efke film floating around, then I highly recommend Atomol.

Recommended Reading
Don’t just take my word on Atomol 49 check out these other blogs on the subject!
No other Reviews Found