I admit that I haven’t used many of them for Canon cameras because I’m primarily a Nikon shooter. But there’s something special about a unique camera within the overall history of a camera manufacturer, and when it comes to Canon, that camera is the EF. Not to be confused because these days, when you match Canon and EF, you’re talking about their line of Autofocus lenses for the EOS system in the EF-Mount. But before the name was applied to lenses, it was a model of Canon cameras. Often passed over in general history, the EF is unique for two reasons: it was the first camera to use a vertical-travel metal shutter (the iconic Copal Square). It also offered up some form of electronics and semi-automatic exposure control. Special thanks to Bill Smith for loaning this beauty out for a review! 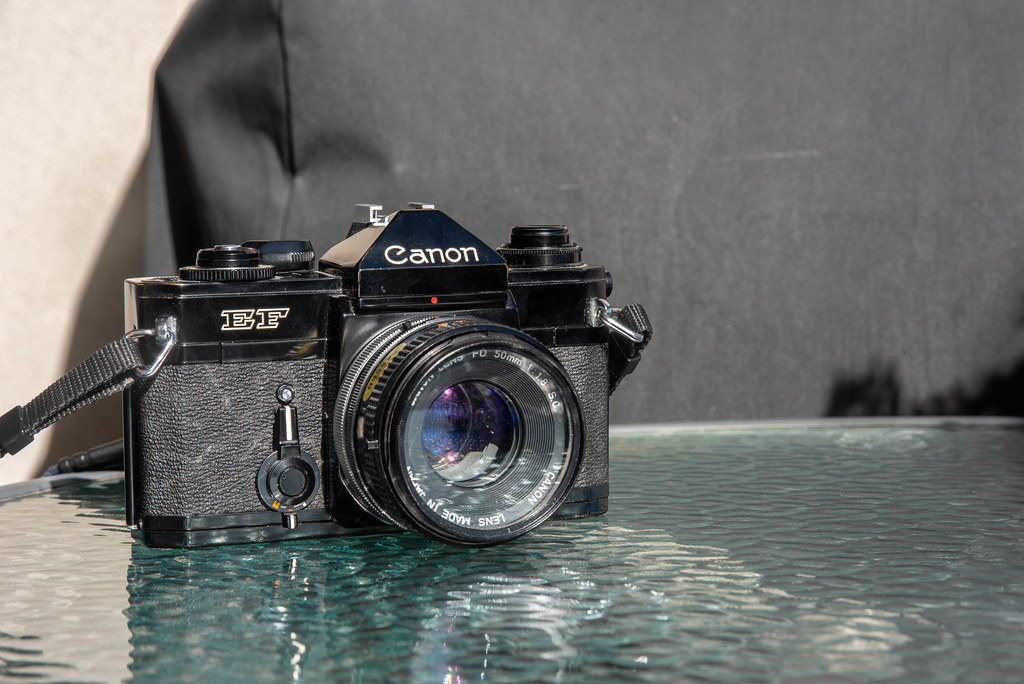 Background
Canon stands as Japan’s first producer of a compact 35mm. Founded in 1933, the company had their prototype, the Kwanon. After three years, the first rangefinder, the Hansa Canon, hit the public market. Canon focused solely on camera bodies, while Nikon supplied the lenses at least until 1940. Canon continued its focus on rangefinders in the post-war era, even into the mid-century when more companies were moving to an SLR format. But the march of time would see Canon release their first SLR, the Canonflex, in 1959. The Canonflex used a breech-lock bayonet mount for their interchangeable lenses, known as the R-Mount today. Canon continued production of the R-Mount cameras until 1962 when they updated their mount to the FL-Mount with 1964’s FX and FP SLRs. The FL-Mount cameras included the innovative Pellix, which used a semi-transparent mirror. It was the 1971 release of the Canon F-1 that introduced the final iteration of the Canon breech-lock mount, the FD-Mount. But the F-1 remained at its core an all-manual camera and the release of the Konica Auto-Reflex T with shutter-priority semi-automatic metering. Taking the existing F-1 form-factor, Canon fixed the focusing screen and prism forming the body of the EF but instead of using their horizontal cloth shutter, purchased a shutter from a third party. The legendary Copal Square Shutter gives the EF the status of the first Canon SLR with a vertical travel metal shutter. But also a hybrid shutter with the faster speeds being mechanical down to 1/2″ while the 1″ to 30″ speeds being controlled electronically. It also provided the camera with shutter priority semi-automatic exposure metering capacity using a centre-weighted averaging silicon photodiode. While often playing backseat to the more popular F-1, the EF is a proof of concept camera that sold for $460 (USD) (~460$ CAD) when it came out in 1973; that’s about USD 2,900 today (~3,500$ CAD). Many Canon cameras came in both Chrome and Black finishes, the EF like the F-1 came in only black, and no special editions or variants were released. Production ceased in 1978; the lessons learned went into creating the Canon A-1 and the next camera with a vertical travel metal shutter, the T50, came out in 1983.

Impressions
You can see Canon’s use of the F-1 as a foundation to the EF at a distance. The camera is designed around an all-metal body and, more importantly, the Copal Square shutter. The body is well laid out and carries many of the typical design elements of cameras of the era with angled off corners allowing it to be easily held in hand comfortably. The design is clean, with all your controls well laid out. My favourite feature is the shutter speed dial, it’s mounted around the shutter release, but the front section sits out slightly from the top plate, making it easy to manipulate with your index finger without having to remove your eye from the viewfinder. There’s a dedicated on/off switch, with the switch popping the film advance leaver out ala Nikon, but you cannot accidentally pull it out and power on the machine, so it does save the batteries. And speaking of batteries, the camera runs on a pair of mercury cells, with each cell being housed in its holders side-by-side. It’s an interesting configuration. The film advance lever moves smoothly, and the shutter sound is delightfully authoritative. The camera asks to be used, and you want to use it as soon as you pick one up.

Experiences
Despite primarily shooting Nikon cameras, the EF is a great camera to work with and was easy enough for me to pick up as many of the standard functions and controls are in the same place. It is truly a camera for the photographer. It’s well balanced in hand with a good weight, enough to know that the camera is there without being overly burdensome. Despite lacking the Canon Quick Load system, the camera is easy to load and doesn’t require much fiddling. The camera features an on/off switch, which when you flip up to the on position will pop the film advance leaver you, then when you switch it off, you need to put that leaver flush to the camera body. One of the best parts of working with the camera is the viewfinder; it’s bright, clear, and easy to focus on despite not having a split prism. Although the best part is the amount of information displayed, you have a full range of shutter speeds, including which one is selected along the bottom of the finder. A needle on your right side indicates which aperture the camera has selected when in shutter priority mode or in manual mode, which aperture you need to set the lens to. And that is my one big problem, is that there’s no way in the viewfinder to see which aperture you have selected on the lens. While the metered manual is possible, it’s the best run in semi-automatic mode. And to set that put the lens’ aperture ring to the green A. Probably the best feature is that the shutter speed selector is easily adjusted without needing to remove your eye from the finder. The dial juts out from the camera’s body, allowing you to move it with your index finger quickly. The film advance has a decent throw and a quick return. Although I found myself keeping my thumb on the winder and guiding it back, I don’t know why I picked that up. Mounting and dismounting the lens can be troublesome if you’re not used to the old-style breech-lock with the collar locking device, but you don’t have to only go with those lenses. You can use the newer style FD lenses with the button release. Probably what I find the best about the EF, it gets out of the way and lets me enjoy the process of making images with the camera.

Optics
Optical quality is something you do not have to worry about with any Canon FD lens. These early lenses bore close similarity to the older FL lenses, and you can use these lenses on the EF but with stop-down metering only. Best to stick with actual FD lenses. The lenses feature a locking collar in the form of a silver ring at the back of the lens. The idea was to reduce wear on the lens’ delicate parts. And it shows as many original FD lenses are in excellent condition. What makes the FD mount even more impressive than from the start was future proof; you can run these lenses on a fully auto-exposure camera. If you are looking for period-appropriate lenses, the old style with the locking collar is the best match. Canon produced prime lenses from 14mm to 800mm, and a tonne of zoom lenses; probably some of the best choices for a quick and helpful setup include the 24 or 28mm lenses with an f/2.8 aperture, a 50mm f/1.8 S.C. or f/1.4 S.S.C. and for something longer either the 100mm or 135mm lens. If a one-and-done lens is a better option, you have fewer options for fixed aperture zooms; a 35-70mm f/4 is your best option for an excellent all-around ‘kit’ lens. If you go with the New FD lenses, FD(n), these will lack that S.C. or S.S.C. markings as all the FD(n) lenses have that desirable S.S.C. coating.

Lowdown
If you’re the type of photographer who wants a little bit of automation in their FD kit but doesn’t like the idea of a plastic SLR, then the EF is a good camera for you. With all-metal construction, a solid and reliable shutter and shutter-priority metering well, you’ve described the EF. The Canon EF also is a great overall camera if you want something unique, reliable, and has excellent performance. The camera is surprisingly affordable on the used market if you can find one among the lenses list. The ones that I managed to find run between 80-130$ and often comes with a lens. I can honestly see this camera being a perfect second body paired with a Canon F-1(n) or New F-1, or a great addition to a completist’s collection of Canon FD mount cameras. I know that if my camera kit had a more Canon foundation, the EF would undoubtedly be one to add.