The KMZ ЗЕНИТ 3m (Zenit 3m) is a camera that is often bought for only a couple of reasons. The first is the desirable Helios 44 lens; the second is a collector’s item. In the overall history of Soviet cameras, the Zenit 3m marked the first popular SLR to come out of the Красногорский механический завод or Krasnogorskiy Mechanicheskiy Zavod (KMZ). Sadly, like many older Soviet cameras, they aren’t known for their longevity and often suffer shutter failure. But my good friend John Meadows uncovered his Zenit 3m, and it still works, so he loaded it out to me along with his Helios lens with my M42 Helios in exchange to continue his Only Cafe portraiture project. 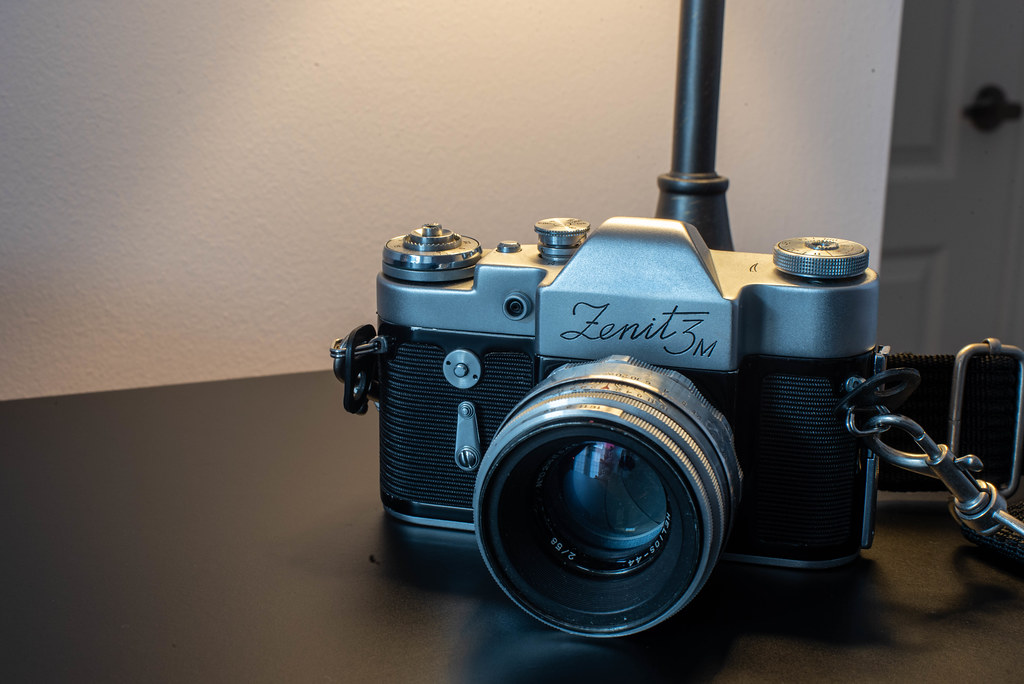 Background
In 1942, to preserve the Juggernaught that was the Soviet optical industry, the Красногорский механический завод or Krasnogorskiy Mechanicheskiy Zavod (KMZ) opened its doors. Initially producing lenses and Leica II copies the FED rangefinder under Zorki. And while the factory did find itself under Nazi occupation during the invasion and work of the Soviet Bloc during World War II (where do you think those Nazi badged Leicas came from?), KMZ got the final word. The Soviet occupation of eastern Germany resulted in a lot of camera technology being brought back to KMZ and other manufacturers. SLRs rose in popularity post-war, and KMZ began to work on their SLR based on the Zorki 1 rangefinder. The rangefinder elements stripped down to the chassis, a mirror box shoe-horned in, and a new pentaprism on the top, the 1952 Zenit would retain the same shutter, film transport and lens mount as the Zorki. The camera’s name was later retconned to Zenit-1. A slight improvement in the form of the Zenit C in 1955 added a new mirror pull and a PC flash sync socket. And five years later, the Zenit 3 removed the old rangefinder styled film advance knob and replaced it with a familiar leaver style advance. The Zenit 3 is hailed as one of the cleaned and best-designed SLRs from KMZ. So when they returned it with the Kristall in 1961, which changed almost everything about the KMZ SLRs is unknown. But, Kristall did remove the bottom film loading with a familiar hinged back. Thankfully in 1962, the designers at KMZ returned to the old typical Zenit 3 chassis but kept the idea of a hinged back for film loading; the new Zenit 3m proved a success. The brand was in Cyrillic in the domestic market, while export models used Roman characters and often dropped the 3m. Additionally, the 3m was available under the Zenith, Kalimar, Global, and Revuflex names. It should also be noted that there never was an all-black version of the 3m made, but a special 50th Anniversary of Great October was released in 1967. The 3m outstripped the later Zenit E and ended in 1970.

Impressions
If you are unfamiliar with earlier copies of Soviet SLRs, then the look of the Zenit 3m might be a bit strange, foreign almost. You can still clearly see the camera’s lineage to the Zorki rangefinders, especially around the shutter release/film advance and the shutter speed dial. Even with being a Soviet camera, there is a certain refinement to the overall look of the camera, the smooth and shallow pentaprism. What makes the Zenit 3m all the more interesting is weight, it looks heavy, but it is a comfortable weight. Yet there is functional brutality about the camera; the thing works. It takes pictures but doesn’t wax poetic about the process. It’s refreshing to go back to this idea of Soviet-era photography. Everything is right where it needs to be, all within reach; the shutter release is a heavy affair, made more accessible by adding a soft release (an addition to the camera by John); the film advance is a big chunk of metal that rotates almost 180 degrees. While the camera makes for a great shelf piece, it is equally impressive when used.

Experiences
Working with the Zenit 3m is undoubtedly an experience. It has an almost deceptive simplicity from the start. The first thing you need to realise is that there is zero automation with this camera, and it will make you pay for every mistake and make you work for every step. The first thing I noticed is how easy loading film is, which for a camera of this age is excellent; you will have to reset the frame counter manually. Once the film is loaded, the fun begins, and I use the term fun loosely. The camera offers up no lightmeter, and having no accessory shoe, mounting a hot shoe meter is impossible; you can go with sunny 16, but again, and with a top shutter speed of 1/500″ allows you to use an ASA-400 film easily. And speaking of shutter speeds, make sure that you have the film advanced, and shutter cocked before adjusting your shutter speeds. This little quirk is common among Soviet SLRs of the era, and if you forget and try and change those speeds, there is a chance of damaging the already fragile shutter. The viewfinder is decent, and all it does is be a viewfinder, a means to look through the lens and compose your shots and assist with focusing. There is no split prism, so you have to work between focusing wide open then stopping the lens down to see what all is in focus. And despite not having the usual assistance, it isn’t too hard when working in the bright sun to nail that focus. You also have to stop down the lens manually; there is no mechanical link between the camera and the lens aperture. Thankfully the Helios-44 does make this task easy, but I’m not sure about other lenses of the era. The shutter release is heavy and takes a fair bit of effort to press to release, and the film advance is near 180 degrees and complains the whole way there and back. Rewinding the film is a two-hand job, with one pressing the release lock while the other rewinds the film. Sadly in my case, the camera did a number on the film and physically damaged the film stock while advancing the film about mid-roll. The result is that the film didn’t move properly with the stripped sprockets. But such is life when working with a Zenit of this age, so a word of warning.

Optics
There are plenty of exceptional optics out there for the Zenit 3m, all Russian. And before you turn your nose up at these lenses, understand that among the bounty taken during the occupation of Eastern Germany, Carl Zeiss was among the factories plundered by the Red Army. The most desirable lens is the m39 mount Helios 44, thanks mainly to the ability to render the out-of-focus areas with a lovely swirl (but many lenses do that). Interestingly enough, many Russian photographers turned their nose up at the Helios lens. There is plenty of excellent Soviet lenses out there, additional Helios glass, Industar, MIR, and Jupiter. Some good choices include the Helios-44 mentioned above, Industar-50, Mir-1, and Tair-11; the unfortunate thing is that the camera is the least of your worries with the rise of adapting for mirrorless bodies. The glass is starting to creep up in price. However, the one thing to watch out for is which glass you use. In the specifications, I was careful to note that the camera has an m39 mount, not Leica Thread Mount. While the nitpickers out there might say, ‘aren’t they the same thing’? Not all m39 is LTM and vice-versa; on Soviet cameras of this era, the thread pitch is different, meaning the two aren’t interchangeable. So don’t expect to mount that Summitar and Elmar lens on your Zenit 3m.

Lowdown
The Zenit 3m is a tractor, not a roadster. It gets the job done without too much fluff; if you treat it right and slowly, it will do the job without being flashy about the gig. One surprising thing is that the camera is still affordable on the used market! Despite the desire for old Soviet glass for mirrorless and cinecameras, a Zenit 3m will cost you between 20-90 dollars; there are a few above 100$ and some well below, and almost all of them come with lenses. Most in the standard range don’t expect a Helios lens; most will have an Industar-50 attached, which is no slouch of a lens either, but you will pay more for those with the Helios (for reasons). Of course, it is buyer beware as there is always the chance that you get one with a failed shutter. Thankfully being a Soviet camera, you may even be able to repair it yourself with only essential tools and a bit of online reading. If you’re into Soviet Cameras from either a collecting or photographic standpoint, the Zenit 3m is undoubtedly a worthy camera for your toolkit or collection.