I seem to be developing a soft spot for cheap and cheerful SLRs from the 1990s and early 2000s. These may not be the best or most robust cameras out there, but they aren’t hard on the pocketbook, make use of existing lens systems and deliver decent images without too much fuss. Plus, they make great loaner kits for those who want to try film photography but don’t want to invest in something or worry about all the details, such as manual focus or exposure. Well, meet the EOS 3000; you could almost say that this was the entry-level SLR that perfected Canon’s entry-level SLRs as the 3000 continued to see production through various improved spec models until the end of Canon’s 35mm offering and even still ended up being a platform for the early entry-level DSLRs. 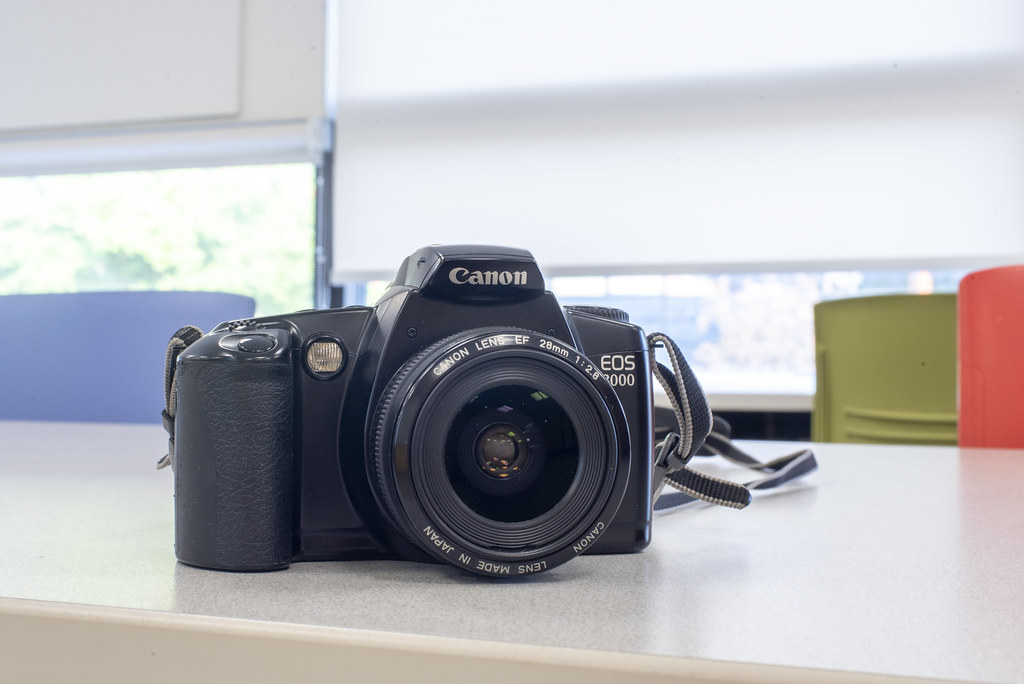 Background
By the end of the 1970s, cameras were becoming far more advanced; Canon’s efforts had normalised the inclusion of electronics and auto-exposure in their SLRs with the wildly successful A-Series. But the latest game in town was autofocus, while the earliest successful autofocus cameras were in the point-and-shoot line. Canon had dabbled with some form of focus assist with the AL-1, released in 1980. The AL-1 used a phase-detection system with a through-the-lens CCD sensor and a specialised etched glass mirror to act as a focus confirmation for newcomers or those with bad eyesight. While far from true autofocus, the idea was to keep the manual focus going in the face of Nikon and Pentax with their earliest autofocus efforts in the F3AF and ME-F. Of course, everything changed in 1985 when Minolta released the Maxxum 7000, the first commercially successful autofocus SLR. And Canon looked at the 7000 closely as they started to take those ideas into their autofocus system. But EOS would not spring out of the 7000 immediately. A year later, in 1986, the Canon T80 became the company’s first proper autofocus SLR. The body of the T80 continued the same phase-detection system as the AL-1, meaning you could mount manual focus FD lenses and get that focus assist function. But when you mounted the AC lenses, which were a standard FD-Mount but with an internal focus motor, the lenses communicated with the autofocus system and then set the correct focus. But these early efforts continued to use the existing FD-Mount, and if there’s one thing that Canon is known for, they build a new lens mount when they make a giant leap forward. And that is what happened in 1987 with the release of the EOS system. The EF-Mount was Canon’s new, all-electronic lens mount explicitly designed for autofocus. Like the Minolta A-Mount, manual focus on the new EF lenses was difficult; the difference is that Canon built the autofocus motor into the lens itself rather than having the motor in the camera body. The first camera from the system, the EOS 650 came out that same year. This single entry was aimed at all market segments, but after seeing the success, Canon began to split things into different models. The first entry-level SLR came out in 1988; the EOS 750 had a similar look and felt to the higher-end 650 but lacked the additional features, the EOS 750 did not have any semi-automatic modes, and users were forced into using only pull auto-exposure. The 1980s boxy VCR look was dropped with the 1988 EOS 850 but retained the lack of real manual control. Canon updated its control interface and included a single control dial on the 1990s EOS 700; this allowed the photographer to access the different creative modes, although a lacklustre response resulted in the model’s short life. It wasn’t until 1995 that a new entry-level offering hit the market, the EOS 5000. The 5000 filled that lower tier gap and started giving users some additional control; the 5000 included full auto-exposure and, for the first time, shutter-priority mode. The 5000 was followed up by the EOS 3000 in 1999. The 3000 finally added a complete set of modes, full auto, program mode, shutter and aperture priority, and manual metering. Canon finally hit the perfect balance for an entry-level camera, and the 3000 proved popular enough to provide a foundation for the EOS 3000N in 2002 and the EOS 3000V in 2003, and even today acts as a foundation for entry-level digital SLR offerings from Canon.

Impressions
Small, compact and lightweight are the three words that came to mind when I first saw the 3000. And the camera certainly lives up to all of these descriptors, and Canon’s move to a KISS (and the EOS 3000V would be known as the Kiss Lite) mentality for their consumer line of cameras. You could be forgiven for mistaking the 3000 for an early-model digital SLR. The exterior controls are limited but well-placed. The control dial is where you can turn the camera on and off (L for locked or Off), then set the different exposure modes (P, Av, Tv, and M) along with setting the ISO (which you can do manually or DX), and accessing the various creative modes and the full green-box automatic. I should also note, coming from my point of view of being a lifelong member of the Nikon club, in Canon parlance, Shutter Priority is indicated by the term Tv or Time Value. The camera’s height is short, so you’ll find your pinky slips off the bottom if you have larger hands. Still, Canon offered up an additional grip or a full-on battery grip for the camera (that also allows the use of AA batteries instead of CR2s). Only a single command dial is located right by the shutter release and has excellent feedback. The shutter has a comfortable half-press and a satisfying release sound. The additional controls are well laid out and clearly labelled, with your Av +/- button and AE lock button within easy reach of your thumb, making it easy to adjust these settings without having to take your eyes away from the viewfinder. The one downside is that the rubberised coating on the grip is starting to get a bit sticky, but that could be due to the humidity, and it was easily cleaned with some isopropyl alcohol and a bit of elbow grease.

Experiences
There is nothing complex about this camera, and coming from cameras requires a lot of concentration and effort to produce the image. But sometimes, all I want is to go out and enjoy making images without too much thought outside of choosing and composing my shots. The camera is lightweight and easy to carry, even with the thin included strap. You can take it around all day without any fatigue, including having a couple of extra lenses in your bag. The 3000 is also a camera that works best in automatic, full autofocus and AE mode. I’m not talking about the Green Square mode, but setting the camera to P or a semi-automatic mode will get the best results. The problem, at least for me, lies with going full manual. First, the focusing, the rings on the prime lenses are narrow and difficult to grasp and have a bit more play than I was expecting, but there is at least a focus assist that will flash a green dot when the item you have a centre point in focus. For manual metering, you are hampered with only a single command dial. I am used to cameras with two command dials but am starting to get used to only having one. On the 3000, in manual, the dial will adjust the shutter speed, then pressing the Av +/- button will allow you to adjust the aperture. The one thing that surprised me is how bright the viewfinder is for a camera aimed at entry-level photographers, with aperture, shutter speed, and an EV scale in brilliant green characters. The autofocus is surprisingly fast and accurate, but that also depends on the lens; I’m working with non-USM lenses, but aside from some extra noise, they’re decent. And the metering is accurate, but you are stuck with averaging (which isn’t bad). Loading the film is easy; open the back, pull the leader, and close the back. And like most Canon SLRs, the film is wound out of the cartridge and, as you shoot, is incorporated back into the cartridge. The film will automatically rewind after you’ve hit the roll, or you can manually rewind by setting the control dial to the rewind options and pressing the rewind button. Overall I found the EOS 3000 a refreshing and easy camera to use, and it produces excellent images with most of the lenses I used!

Optics
One thing you don’t have to worry about on the 3000 is good optics, as you have access to a wide range of excellent lenses. While my experience with Canon optics remains limited, the EF line of lenses is on par with what I get with my Nikkor glass. When I got the camera, it came with one of the basic kit lenses and one that struck me as a little odd. The Zoom 38-76 f/4.5-5.6 seems to be a lens that Canon lifted off a point-and-shoot and turned into an SLR lens. If this is the only lens that comes with your camera, then use it, it’s not the best lens out there with a strange focal length and not exactly fast, but it does get the job done. It might be best to update to an improved kit lens, the 28-80mm comes to mind, and it won’t break the bank. Of course, there are fantastic prime lenses that you can easily use without throwing the camera’s weight off by much. The nifty (or thrify) 50mm f/1.8 is a great match, and a good 28mm f/2.8 will handle well on the camera. Another excellent option for a short prime that will keep the camera size and weight down in the pancake is 40mm f/2.8, a more recent addition to my kit. The trouble is that because the EF-Mount is still being used, the lens, especially the prime lenses, are still pricey on the used market, but you can still pick them up brand new. The one thing to watch out for is the EF-S lenses; these are specifically designed for crop sensor digital SLRs, and mounting them on the camera will cause damage to the lens and the camera itself.

Lowdown
I highly recommend any of the EOS 3000 lines of cameras; while the original 3000 is starting to get old, the last entry, the 3000V, is still relatively new as film cameras go, being released in the early 2000s. It’s a capable camera with a lot to offer any photographer, especially those who use the EOS system and have a selection of EF lenses available. While it’s not as big or full-featured, it offers an inexpensive way to try out 35mm film with an experience close to what you can get with a digital SLR. You can find these on the used market for under 100$ and often comes with a lens, and that’s for the original 3000, 3000N and 3000V. The EOS 3000 is powered by a pair of CR2 batteries, while readily available, are pricey. An optional battery grip allows you to power the camera with four AA batteries, making it a bit more cost-efficient and able to get batteries anywhere. I’m rather pleased with this camera, and it will undoubtedly be put into the Frugal Film Project rotation after the Maxxum 70, and I’ll be putting the 3000, 70 and F65 head-to-head later this year to see. Which late-model consumer SLR comes out on top?

Further Reading
Don’t just take my word on the EOS 3000; you can check out the reviews by other awesome camera reviewers!
Peter Vis – Canon EOS 3000 Review
Lomography – Viewing the World of the Canon EOS 88