Even though it looks like the iconic Kodak Brownie, we’re going to clear the record; this camera is not a Brownie. And although this model came after the Brownie, it is a camera that has its origins before the Brownie and flexible films. The Hawk-Eye is a camera that I don’t take out that often the reason being that it stands at over 100 years old. I did get it before it joined the century club and at that point, I still thought it was part of the Brownie family. I took it out for review shortly after its 100th birthday. A basic, no-nonsense cheap, mass-produced camera for the snapshot market of the 20th century there’s not much more to say, except it remains in my collection today. It can be frustrating to use at times, far from perfect, difficulty to load and handle in the field. And despite lacking all the extra functions I have in my modern cameras, it takes a fair amount of thinking to get the best results. 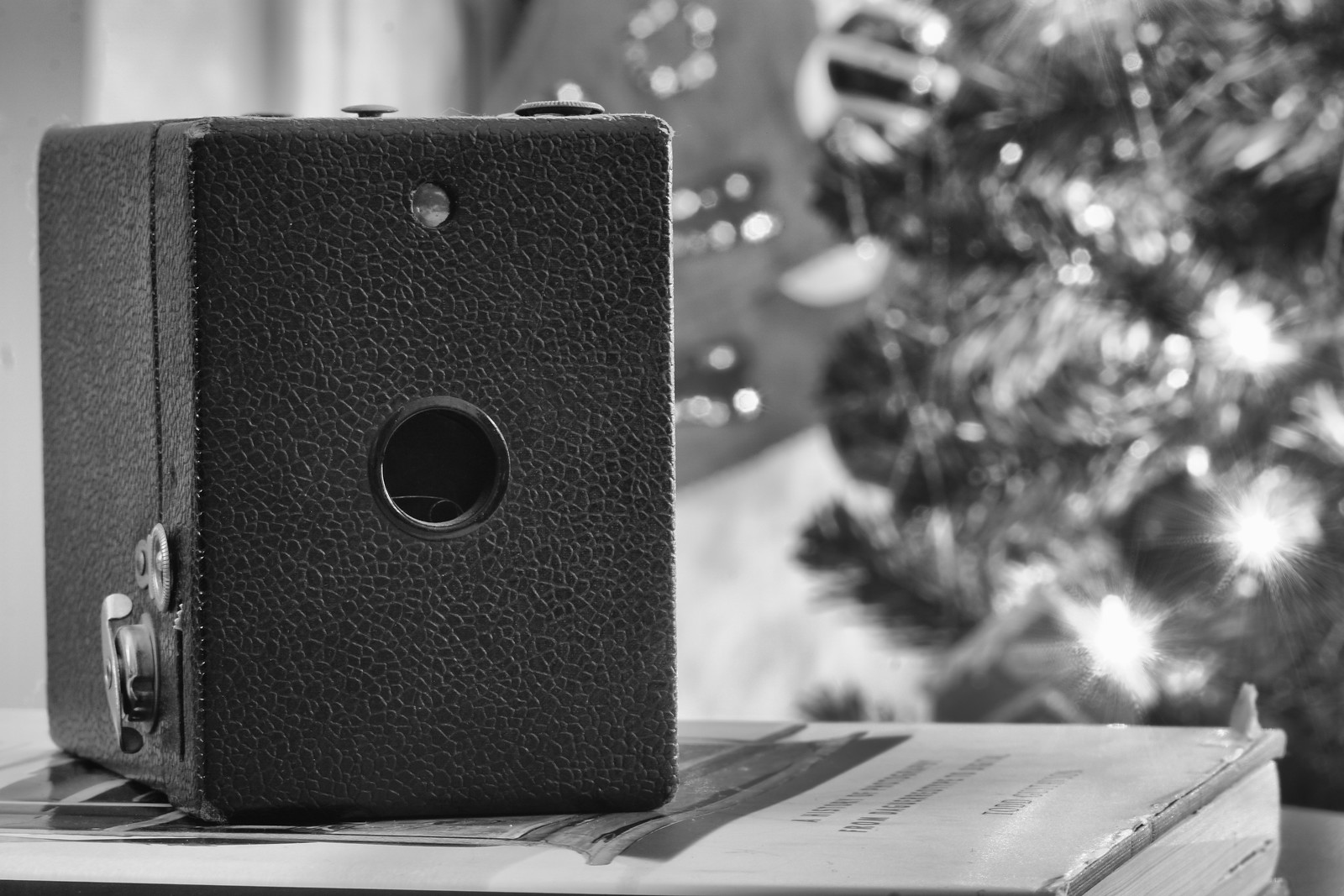 Background
The story of the Hawk-Eye No. 2 starts back in the late 19th-Century in Boston, not Rochester as you might think. The original Hawk-Eye came from the Boston Camera Company (founded in 1884), called at the time the Hawk-Eye Detective Camera released in 1888 (ironically the same year that Eastman released the original Kodak camera), it was far from the sub-miniature cameras you’d think it would be attached with the term. Instead, it meant that the camera could be shot hand-held and often focusing could be done with internal bellows. In the case of the Hawk-Eye, it had no such focusing capacity and designed to produce snapshot images on 4×5 dry plates. The camera was far from small. The Boston Camera Company came under the control of the Blair Camera company in 1890, and the manufacture of the Hawk-Eye continued under the Blair brand. It was the founder of the Boston Camera Company, Samual Turner, now working for Blair who pioneered work in creating flexible film and in 1892 applied for the first patent for what we today call roll film, complete with spools and baking paper. They even produced a magazine back for the Hawk-Eye camera and a specific camera designed around roll film, the Bulls-Eye. Before the patient was approved, George Eastman became attracted to the idea of flexible roll film and customer reloadable cameras. Eastman purchased the licensing to produce his roll film in 1894, a year later, the patient was awarded to Turner and Blair. Of course, the 1890s marked the year of rapid expansion by Eastman and in 1899 bought out and made Blair a subsidiary of Eastman Kodak. Along with all the trademarks and patents of Blair Camera. Blair continued to produce the original Hawk-Eye and Bulls-Eye cameras. But in 1901 Kodak released a new version of the flexible roll film, which we today know as 120 format. They began to re-release many of their old cameras to accept this new format which was aimed at the consumer market. The first being the Brownie No. 2 in 1901. It wasn’t until 1913 that the Hawk-Eye took on the new format with the Hawk-Eye No. 2. The new camera shared little with its original namesake, now built from cardboard with stamped metal internals and shooting in 6×9 format. But when it came to the Model C it was more of an export model designed for sale outside of the USA produced mainly but Kodak’s UK and Canada divisions. Despite being the simplest version of the Hawk-Eye, the Model C proved popular enough that Kodak gave it a facelift in the lead up to Kodak’s 50th anniversary in 1938. The leatherette was changed into multiple rainbow colours, a change made to many Kodak camera offerings. But with the camera near the end of its life, Kodak ended up giving away 550,000 to children in a massive write-in campaign. Production of the Model C ended in 1934, but the name lived on well into the middle of the century.

Impressions
It’s a box, that’s about all you can take away from the camera at first glance. I remember seeing this camera up on the shelf of Burlington Camera and being drawn towards it mostly thanks to my mom’s Agfa Box 50. Although the Hawk-Eye has a much lower building quality than the box. The camera’s light-weight nature is thanks to the main body being made from heavy cardboard. I’d put it closer to press-board with a textured leatherette cover. The internals is made from stamped sheet metal. Other pieces of the fit-and-finish are made from stainless steel. Not the most ergonomic like any box camera. The viewfinder is probably the worst part of the whole camera being far too small and in my case, slightly grimy making it hard to use. I should probably clean it, but I also don’t want to take apart my century camera. Also, there’s no landscape format viewfinder on the Model C (the Model B has this feature), but I mostly shoot from the hip, so viewfinders aren’t that important. But the camera is mainly designed around shooting in portrait orientation.

Experiences
Let’s just say that the Hawk-Eye isn’t the most user-friendly camera out there, built as a budget snapshot camera. And given the age and time when the camera saw production (mine has a production date of 1 February 1916), it is impressive the camera was even built at all with war production in full swing at the time. The biggest frustration of the camera starts right at the beginning, opening the camera is a three-step process, mostly to make you think and make sure the camera isn’t loaded and the film open to light before opening it up. There are two latches and then the film advance knob. Loading film can be a frustrating process. Given the size of the camera and the large negative size, you have to be careful when pulling the backing paper; you will almost be at the starting point when you tuck the tail into the take-up spool. Thankfully the Hawk-Eye takes regular 120, so the camera remains quickly loaded today, no fumbling with adapters. Now the take-up spool is not fitted into the camera body, held in by only one pin until you lock in the advance knob. And that can even be hard because the spool tends to sag, it’s best to hold the camera upside down to let gravity give you a hand. Shooting the camera isn’t too bad, the viewfinder is small and in my case grimy, and there’s the lack of a landscape viewfinder, but with a bit of practice, you can quickly just shoot the camera from the hip. Besides, with the placement of the shutter release, it’s best to shoot the camera in portrait orientation anyways. The shutter speed is probably close to 1/25″ so camera shake is a real issue here, it also limits the speed of film, best to shoot slower films. I’ve only shot ASA-100 and ASA-125 films. Just watch out, given how everything is loaded, you’re going to get fat rolls, so try and unload inside a change bag if you’re doing home developing.

Optics
Surprisingly, the optics in the Hawk-Eye are decent for the production value of the camera. The camera is centred around a single element meniscus lens rated at 10cm (100mm) giving you a near ‘normal’ field of view when shooting and offers the perfect coverage for the 6×9 negative; there’s no fall off at all in any of the corners. The lens has a fixed aperture of f/11, giving you a decent depth of field when shooting. Of course, you realise the camera is designed for snapshots so try and keep a respectable distance between you and your subjects. And while nothing is stopping you from using colour film in the camera, I don’t recommend that with the single-element uncoated lens colour films aren’t going to render well, instead of shooting black & white film is probably best match. But then again you’re shooting a 100-year-old camera; things were designed around black & white film those days anyway, why mess with history.

Lowdown
There’s honestly nothing wrong with one of these cameras, and if you want to shoot an early era Kodak camera, then the Hawk-Eye No. 2 is a good choice. Not only can you shoot its native film format, but they have also held up well over the years. Also optically they are pretty impressive. That said, you need to be cautious when looking for one online. Given the cardboard construction, you do have to watch out for water damage and physical damage; the sheet metal internals can also rust. Not to mention a tonne of other problems that can come with a camera with an exposed shutter mechanism. In these cases, the camera can make a nice shelf queen. Thankfully these cameras are cheap on the used market, most being sold as-is, which makes perfect sense. With the coloured anniversary versions being sold for more than the basic black models. While I honestly wouldn’t go and buy the cameras from an auction site, these are certainly ones that need to be purchased in-person to check and make sure they’re functioning if you are going to use one in the field.