If you’ve seen this camera before in my reviews, you’d be partly correct; the Leica R3 is the cousin of the XE-7; both are internally the same camera with some external differences (also the obvious being the lens mount). The XE marked a new era for Minolta as it introduced the idea of a semi-automatic camera and a confident professional air to their cameras, not to mention a unique style of names, the X rather than sticking with the old SR nomenclature. While many companies went with smaller form factors in the 1970s, Minolta stuck with their bulky designs, at least for a while. But don’t let that stop you from carrying about the camera; it certainly is a favourite of mine for travel, having been on many trips, including one to Disney and Universal, with little trouble in a small bag. 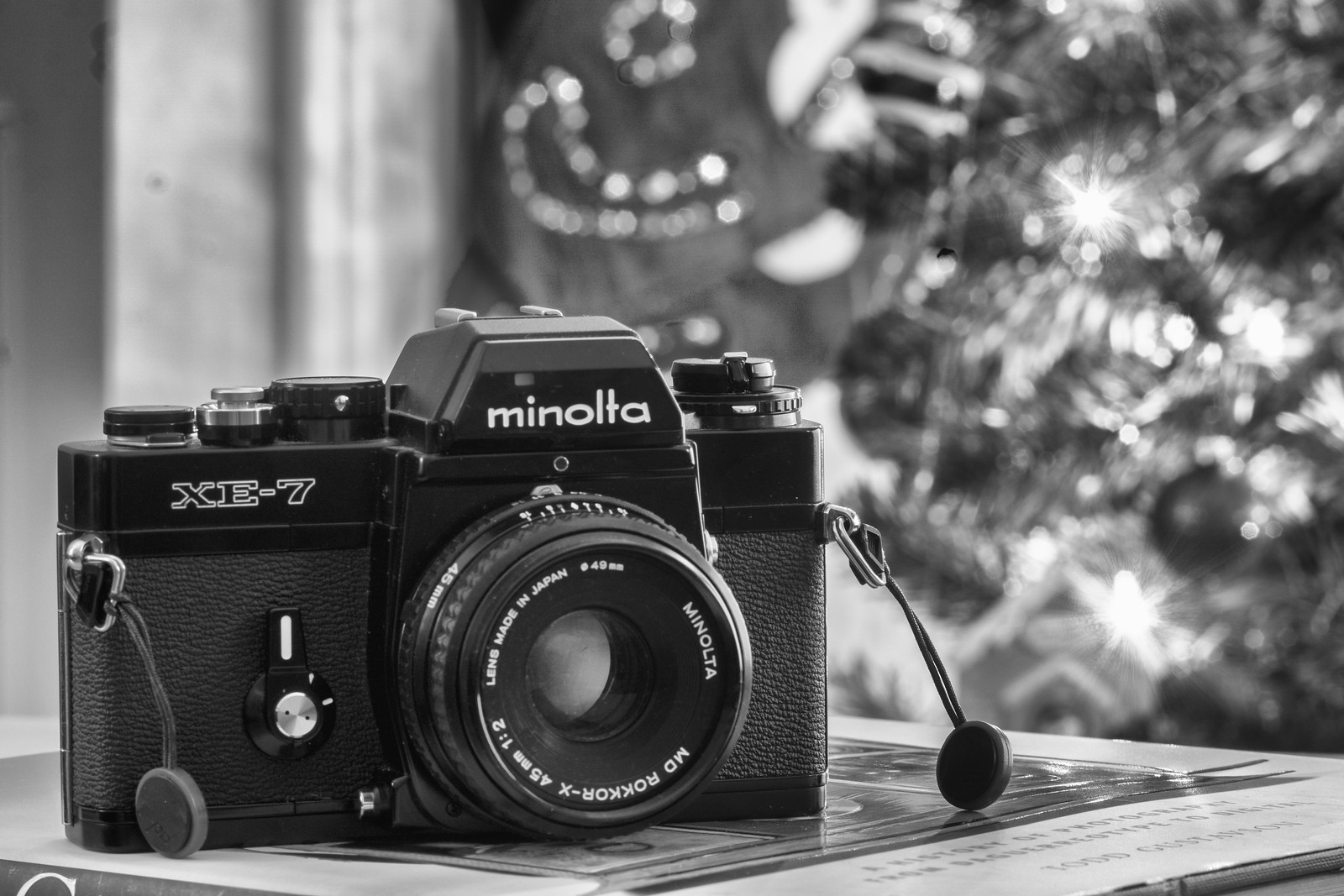 Background
Minolta, like all Japanese camera companies, were founded well before the second world war and, like all those companies, was used to provide a way forward to rebuild the island nation’s economy after the horrors of war during the American occupation. Minolta joined the SLR market in 1958, taking advantage of all the latest format improvements and releasing the SR-2. The SR-2 marked the first arrival of the iconic SR-Mount, a lens mount that would survive until the A-Mount became the Minolta standard in the mid-1980s. The SR-2 includes a short film advance lever, a mirror return, and a film back release with a pull-up on the rewind knob. The problem many found with the SR-2 was that the aperture would not reopen until the film had been advanced. This particular detraction would be fixed with the 1960s SR-3. Minolta released the SR-1 in 1959, but it was a budget model to the SR-2. These first cameras turned Minolta into a player in the greater photographic world, standing strong next to the likes of Pentax, Nikon, and Canon. The SR-7 1962 came with a body-mounted CdS meter and was the first camera to use such a system. In 1966 Minolta introduced the SR-T line, using the same basic chassis as the SR line; the SR-T used TTL metering and the new Minolta CLC system, which had a CdS cell that metered through the lens as well as an external one. A slight change to the SR-mount allowed the lens to communicate the aperture setting to the camera body for match needle metering. The SR-T line of cameras is a bit of a rabbit hole, but they lasted in some form until the early 1980s. In 1972 Minolta entered into an arrangement with Leitz to pool resources and develop new cameras; Minolta had already planned to release their first professional camera, the X-1, a year after the arrangement. The X-1, still based on the original SR chassis, offered the first time Minolta came up with a semi-automatic camera with some electronic functions. It would be the X-1 that provided the foundation for the first joint camera offering between Leitz and Minolta—using the X-1 as the base with a new Leitz-Copal shutter, a pair of CdS cells for TTL metering, and revamped controls. The XE hit the market in 1974 (XE-1 in Europe and XE-7 in North America). Leica’s version, the R3 would carry the same basic shape and style but use Leica’s R-Mount rather than Minolta’s SR-Mount. The only trouble with the XE series is that it lacked any ability to mount a power winder or motor drive and came in two colours, all black or two-tone chrome and black. Production of the XE ceased with the release of the XD in 1977.

Impressions
The XE-7 looks terrific; built in the years when many cameras were being made in smaller formats, the XE stands out. It’s big, a little bulky. You can see the general throwback design to the original SR bodies, yet Leica introduced a certain level of refinement into the camera design. Even if you’re unfamiliar with the camera, you’ll find the XE easy to get along with; all the controls are right there and well laid out. The shutter release is a bit recessed, a minor point; I have since added a soft release button that has helped. The shutter speed dial also sets the camera into aperture priority mode and has a safety catch. The film speed dial doubles as the EV adjustment; thankfully, there are two different catches, so you don’t accidentally change one when meaning to change the other. I’m thrilled that there’s a big on/off switch on the camera’s back, right next to the frame counter and film-loaded indicator. While not the most compact SLR of the era, the XE can be placed easily in a small camera bag with little impact, and the weight is relatively comfortable. A good strap is a must, but I could carry the XE-7 across multiple parks at Disney all day long in the hot Florida sun with little complaint.

Experiences
It should come as no surprise that as soon as I picked up the XE-7, it felt familiar and nostalgic. And that’s not from reviewing the Leica R3, but from my first real SLR, the SR-T 102. The XE-7 is a camera that needs to be picked up, taken out, and used. While not one I would use without a proper strap, it is heavy. The prism is bright, easy to see and has all the necessary information. There’s even a little A when the camera’s in Automatic mode. When running in manual mode, it will show the set shutter speed. The metering is done through a match needle system, which also tells you what shutter speed is picked when in automatic. Loading the camera is easy; just make sure to set the shutter speed yourself to get the film ready quickly. The film-loaded indicator is a big help as well. The advance, while not the shortest, is decent, allowing for the quick action and the shutter sound is a pleasing clunk without being too loud. The one thing that some might find off is that the lens release button is on the side of the lens mount rather than the front, that is if you’re not used to the Minolta system that is, but they are nice and smooth, and with the side, the button makes life relatively easy. Rewinding the film is also easy with a standard release button on the bottom of the camera. The camera takes normal batteries, which are required for everything to function from the meter to the shutter, so not the best choice for a backwoods camera.

Optics
Like all Minolta cameras, the XE-7 takes the SR-Mount and can use all MC and MD lenses in the Minolta catalogue. Even though the R3 is its cousin, it uses a Leica R-Mount, so unlike the joint CL/CLE, you can’t share lenses between the cameras. But don’t let that stop you; while Leitz glass might be better, the Rokkor glass produced during this time used a lot of technologies from Leitz, and some are even directly made under licences from Leitz. I recommend going with Rokkor-X lenses as they are newer and have slightly better coatings. Getting MD versions of the lenses do allow you to upgrade to auto-exposure cameras, as the MC versions only allow for aperture priority modes to function. And I do have a desire for a Minolta XD at some point. But you also will have access to excellent offerings such as the X700 and XG line of cameras with your MD Rokkor glass.

Lowdown
Honestly, if you want a well-made camera with an excellent selection of affordable glass, get the XE(-1,-7) over an R3. Don’t let the Leitz glass draw you in too much, as the R3 requires modern 3-cam lenses for entire semi-automatic operation. And those lenses are used on all future R-Series cameras, from Leica to current digital versions, so that you will pay through the nose. Of course, if you already have those lenses, then the R3 is an excellent camera. The XE is a sound camera system, well made, a significant step up if you’re used to the SR-T series and for a 1970s camera with electronics, it stands up well to the test of time. Thanks to the release of the Minolta XD, you can have an XE without a lens for well under 100$, and that’s for quality units. Well worth the money if all you want is a heavy-duty SLR for your MC lenses.