The film that started the whole Svema craze with the Film Photography Project, Svema Foto 200. Свема is a film stock that is relatively unknown here in North America unless you are of course fans of the Film Photography Podcast. The name comes from the combination of two Russian words, Светочувствительные Материалы, translated means Photosensitive Materials. While Svema collapsed when the Soviet Union died in the 1990s, another Eastern European film manufacture, Astrum, continues the legacy of Svema using some of the old machinery in a new factory in Shostka, Ukraine. Now I did try a roll or two of Foto 200 when it first dropped in the FPP store and never could get the hang of it but like my earlier experiences with the 100 and 400 flavours, I figured I was not developing it correctly. So what better way to turn me onto the film that Leslie Lazenby loves than run it through a review! 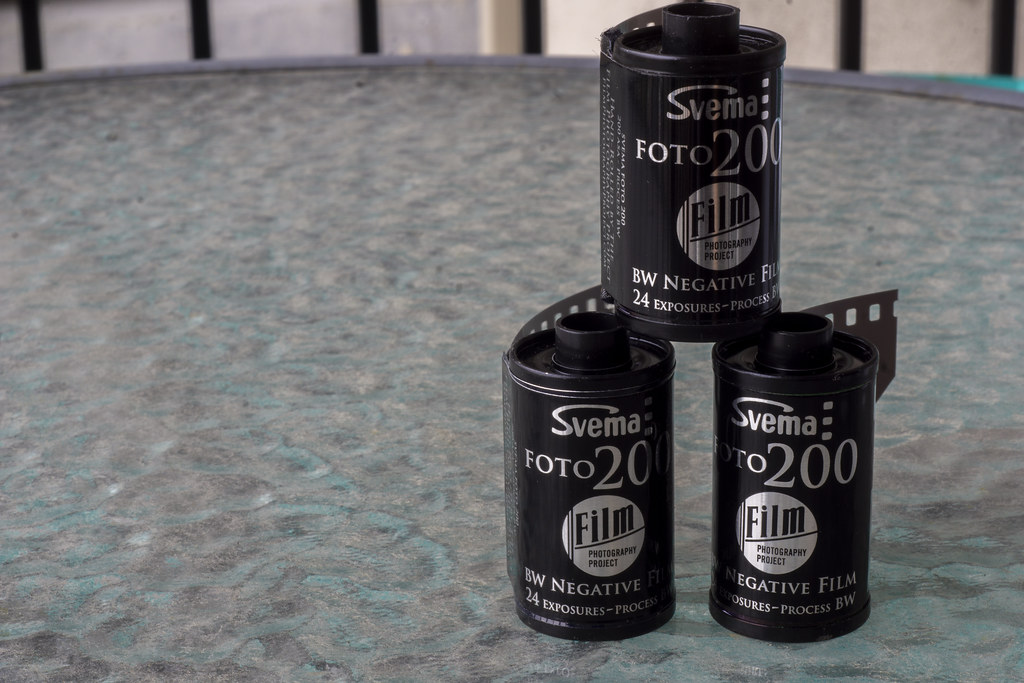 Roll 01 – Kodak D-76
Foto 200 certainly starting off strong with D-76 and I can truly see why people view this film as magical, and that’s just with D-76! There’s certainly a graininess to the film but it adds to the overall image, a dimensionality not a distraction. Not to mention it allows for sharp images. There’s a certain deep contrast to the images which again all for some rich tones. You can see in some images the red-sensitivity to the film with the dark blue sky and that’s without any sort of contrast filter, just a circular polarizer to cut down glare from the early morning sun.

Roll 02 – Kodak HC-110
Here I got a little surprise, originally I decided to use a longer developing time and dilution H, but having a bit of a time crunch, I cut the time and half and went with an old standby and cut the time in half and went with Dilution B. You get the same grain as you do with D-76 along with the same tone and contrast. And when a film is constant, you know you have a good product. While I would like to see the film in different dilutions, I think running it through Dilution B does the job.

Roll 03 – Rodinal
I can honestly see right here why people love Foto 200 so much, everything you expected is right here, this is exactly how the world is supposed to look in black and white. Smooth tonality and good contrast, sharp but not overly so, and a finer grain than I expected. Everything looks just right and classic and shooting the film in a ‘street photography’ environment, sure not urban streets but company streets under bright nearly overhead light everything balances out perfectly.

Roll 04 – Pyrocat-HD
Sometimes Pyrocat-HD is a magic bullet, sometimes it isn’t the best choice. Well, in this case, I’m sure that Pyrocat-HD will give amazing results from Foto 200. However not so much in these examples, they are a little undercooked. I should have added another 30″ or so to the time. Either way, I ended up with some high-contrast images which some mid-tones between the blacks and whites. Yes, there’s a lot more grain than I had expected, but the images remain sharp. Certainly, this is worthy of a revisit with that added 30″ at a later date to see how well the film responds.

Final Thoughts
Out of all the Svema Foto films, I do agree with anyone else who shoots, Foto 200 is my favourite. A solid balance between speed, sharpness and fine grain. Especially with developers like Rodinal and D-76, even with Pyrocat-HD (with extra time or a slight pull), the film is just magic. You will get grain no matter what you do, but in this case, the grain adds to the image, a certain classic dimensionality. The perfect film for everyday applications in travel, events, street, and reenactment photography. And while the thin polyester base will turn some people off and can cause some trouble in loading into a camera and onto plastic reels. But if you take it slow you won’t run into these difficulties. The trade-off is that the film drys perfect flat and scans well, I had no issues in either my Coolscan V ED or V700. The best place to get Svema Foto 200 is through the Film Photography Project that has the film in pre-rolled cartridges or in 100′ bulk rolls.