I’ll have to admit, ever since I went to Europe in 2015 I’ve had the desire to add some sort of folding medium format camera to my collection. Something compact, shooting at least 6×4.5 or 6×6. And for a little while earlier this year I had my eye on a Mamiya Six (the original one, not the modern rangefinder). After a great deal of reading and searching, I realised that there were too many questions about the Mamiya Six and stopped looking. And then this beauty fell into my lap and I’m glad it did. The Ikonta 521 might not be the best folding camera out there but it is exactly what I am looking for in such a camera despite a few drawbacks. No rangefinder, no zone focusing, and no meter. But for a small form factor that takes up no real space…then the 521 is a solid choice. 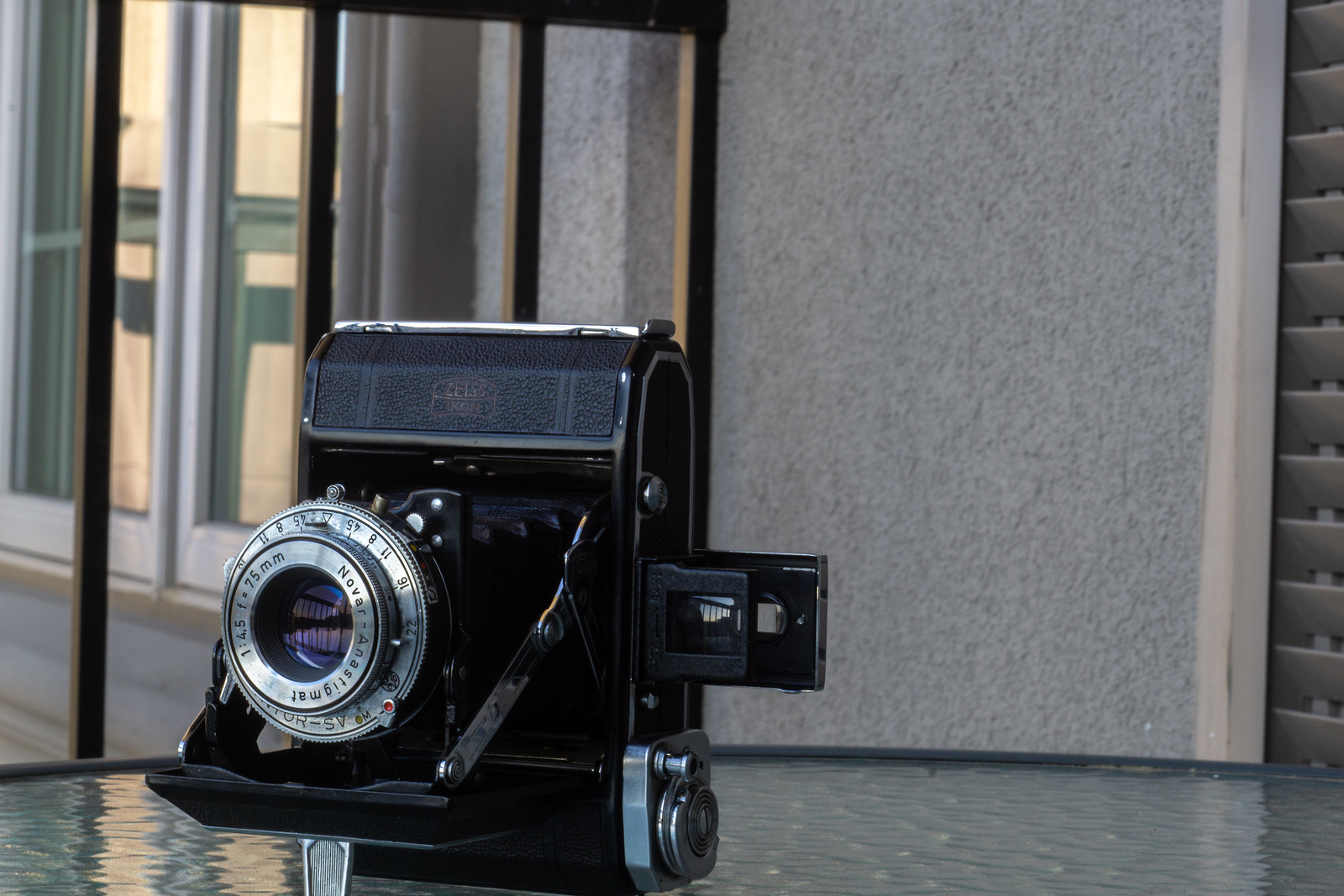 Background
The history of Zeiss Ikon is fairly complex, but the short version is that before 1926 Carl Zeiss which had been building high-end optics since the late 19th-Century. And lenses were all that the company did until they gathered up several camera makers through Germany to form their own camera manufacturing base and called the company Zeiss Ikon. These early cameras worked primarily with plate-based photography. Zeiss released a series of roll film cameras in the late 1920s, the high-end versions were named Ikonta. The Ikonta 520 came out in 1929 and came in four variants (A, B, C, and D) and five tiers. The letter variant determined the image size, A (6×4.5), B (6×6), C (6×9) all taking 120 roll film. The D variant shot using 116 or 616 format film. The three lower-tiered versions used Novar Anastigmat lenses. The lowest using a 7.5cm f/6.3 lens in a Dervel or Telma shutter, the lower-mid tier a 7.5cm f/4.5 in a Telma or Compur shutter, upper-mid tier a 7.5cm f/3.5 or 7cm f/3.5 in a Compur shutter. Then two upper-tier versions both using a Zeiss Tessar lens rated at 7.5cm f/4.5 in a Compur shutter or a 7.0cm f/3.5 in a Compur shutter. The Ikonta line proved popular and Zeiss Ikon released an updated version in 1938 continuing with only the 120 roll film formats (A, B, and C) and updating the model to Ikonta 521. The 521 added the double-exposure prevention lock and the on-body shutter release The early production versions or pre-war models came in two tiers, the lower-tier running a Novar Anastigmat 7.5cm f/3.5 lens in a Compur Shutter and an upper-tier with a Zeiss Tessar 7.5cm f/3.5 lens in a Compur shutter. Production of the Ikonta 521 continued well into the Second World War that is until the continued Allied bombing campaign against the industrial complex of the Third Riech smashed the manufacturing of more than just the weapons factories. It wouldn’t be until well into the occupation that Zeiss Ikon could resume production. The Ikonta 521 resumed production in the late 1940s or early 1950s. These post-war models resumed and often had slightly better optics as the lenses were now coated and the post-war Ikonta 521s came in three tiers, the lower-tier used a Novar Anastigmat 75mm f/4.5 in a Kilo or Prontor shutter, mid-tier with a Novar Anastigmat 75mm f/3.5 in a Kilo or Prontor shutter, and the upper tier with a Zeiss Tessar 75mm f/3.5 in a Compur shutter. Sadly the 1950s brought a close to the era of folding cameras and by 1954 the Ikonta 521 had ceased production. But the Ikonta name lived on with the introduction of the Super-Ikonta a rangefinder equipped camera and the Ikonta 35 that as the name suggests takes 35mm film.

Impressions
There is a certain sleekness to folding cameras and the 521 certainly does not disappoint. And it jumped out at me more so than the Nettar 6×6 camera next to the Ikonta. The 521 is small to the point of being cute when all folded up, compact enough that it can and does fit in a larger pocket and wouldn’t take up much space in a camera bag even if you already had a couple of medium-sized cameras in there already. Even when you have it deployed the camera isn’t too big or heavy in the hand. Although having some sort of strap lugs would be a nice addition. The camera has a single release button to open up the front panel and the viewfinder and if you press it with just the right force and at the right angle the whole thing flips opens and locks into shooting configuration. Your exposure controls are centred around the lens itself while the controls are small they are fairly easy to operate even with larger hands. Plus things are well laid out and easy to tell what surface controls what aspect. Another nice touch is the camera body shutter release and the film advance knob is perfectly positioned. Despite the look, the camera is far more comfortable to hold in the landscape orientation than portrait orientation. Something that I’m glad of because I am not a fan of the 645 formats forcing me into an awkward position just to shoot landscape. There are a couple of issues that do come up, first is that the viewfinder has no frame lines or other items to help with composition. And if you’re looking for some help with the focus, you’ll need an external rangefinder (which I don’t find too helpful, to be honest) as the focus is strictly a guess method, but with enough practice, you’ll figure things out. If you’re looking for an Ikonta with a rangefinder you’ll be looking at a Super-Ikonta. And the final thing that I wish the camera had is an accessory shoe because the 521 is the perfect candidate for a ReveniLabs meter, although you could glue on an accessory shoe from Reveni as a workaround.

Experiences
When it comes to 6×4.5 cameras if you’ve have been a reader of this series of blog posts and my photography, in general, you’ll know that my personal preference for my 6×4.5 format is in landscape orientation, not portrait orientation. The natural position for the Ikonta will result in portrait format and I almost immediately regretted the acquisition of the camera, the Nettar next to the Ikonta on the shelf might have been the safer choice. After shooting the first roll through the camera, I realised that the camera is better in the hand when shooting it in landscape orientation even though it might seem a bit awkward. Loading the camera can be difficult with the metal plate springs, best to load from the top and then pull down the spring and force it in, took me several seconds (seemed like a good minute) to get the thing loaded. Advancing might seem like an automatic function, but that subtle click you do hear is the double-exposure prevention lock releasing. You have to use the red window and line up the numbers. Just make sure you close the protection slide after you’ve advanced and before you release the shutter. If you’re not used to guessing your focus, you can carry around a pocket rangefinder to estimate the distance. Personally, I went with just setting the aperture between f/8 and f/16 to let the wider depth of field do the hard work. You do need to cock the shutter each time, I ended up getting in the pattern of shoot, advance, cock. But building some sort of pattern will help make it easier. Once done releasing the roll is as much a struggle as loading, but it didn’t take as long this time around. In the field as much as I would have liked some sort of strap, it wasn’t needed as the camera is fairly light and can be folded and pocketed when not in use.

Optics
Just because this is a lower-tier version of the Ikonta 521 doesn’t mean the optics aren’t decent. True the higher tier version carries a sweet Zeiss Tessar, the Novar Anastigmat is based on the Cooke Triplet formula (three-element) and those are nothing to sneer at either. But I have to say the images out of the camera to impress me more than I thought. While they don’t have the same contrast punch that you’d get from a Tessar they are sharp nearly edge-to-edge. There is some softness in the corners no surprise with the construction of the lens. That said the softness will increase the wider the aperture I did my best to shoot between f/8 and f/16 to help with a wide enough depth of field to help keep the focus at infinity. Lazy I know, but hey go with what you know. The one thing that I should note is that the pre-war and Ikonta 520 cameras have uncoated lenses and might have trouble with colour films. But don’t let that stop you, I’ve seen plenty of amazing colour work through uncoated glass.

Lowdown
If you’re looking at a folding camera I will give the warning that you do need to look at it in person before committing to purchasing the beast. First is that the newest Ikonta 521s that are on the used market is sixty-six years old at this point, so certain troubles can and do crop up in cameras of that age. Besides checking the lens for haze and the shutter for functionality and roughly proper speeds, the bellows should be check number one. Make sure there are no or very little in the way of holes even small pinholes in large numbers can affect the image quality. If you are buying online ask if the seller has checked the bellows or have them send example images. On the used market the prices are all over the map, the models with the Novar lenses are affordable with prices ranging in the 60 to 90 dollar range. The Tessar equipped models will go for 100-150 dollar range. The price also depends on the format, with the 6×4.5 versions being less expensive than the 6×9 versions. Of course, there are outliers with prices of over 1,000 dollars which I don’t recommend jumping on unless you want to spend the cash. While I probably won’t bring this camera out regularly it certainly will be fun to bring to timeline events to capture some World War Two or Korean War reenactors.

Further Reading
Don’t just take my word on the Ikonta 521, you can check out the reviews by other awesome camera reviewers!
Vintage Camera Lab – Zeiss Ikon Ikonta 521 Review
Tazm Pictures – Testing the Ikonta 521