When it comes to films that are not designed for normal pictorial use, I’m not one to shy away from them. That being especially after I went through three of the FilmWashi offerings, one of them being an Optical Audio Recording film. Even before I had loaded up Washi S into a camera, I had been approached by the Film Photography Project to beta test a new film they had acquired and were planned to release after collecting some developing times for the film. The name was FPP Super Sonic, and like Washi S, is an optical audio recording film. The idea of recording audio tracks in a visual manner remains in use today but is often joined with a visual representation. The first example of this took place in 1919 and went through several different styles to what it is today. There are plenty of film stocks around that can do both audio and video playback, but there is also plenty of film out there designed just for audio recording, which is where we are today with FPP Sonic 25. The stuff is unique, much like Washi S, you end up with a high-contrast image that will produce such a result no matter what lighting condition you shoot it in and being a slower film you do want to have at least some bright or bright reflected light available to you. And you also have to be careful what you process the stuff in to get the best results. 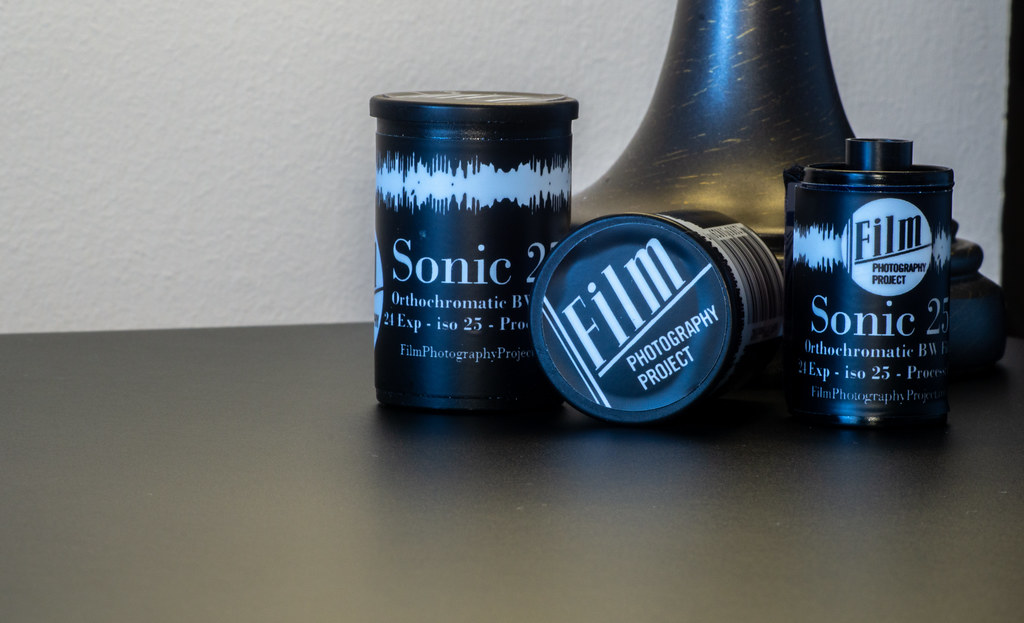 Roll 01 – Kodak D-76
Sometimes you have to read the warnings before heading out and developing film. Right on the FPP’s product page, it gave a warning about developing Sonic 25 in D-76 that it gives too much base fog, but it also gave a time of 12 minutes in the stock solution. I heeded neither of these suggestions and used a D-76 1+1 time that I pulled right from the Washi S time. And while I was able to pull out some images from the roll of twenty-four (about ten total), they were not exactly the best quality. In fact, they looked a little over-cooked for my tastes. Despite the heavy base fog (as in the base was black), the results were high-contrast, sharp, and no grain at all. But there is also something charming about the results, there are some mid-tones, not much, but they are there. Plus it certainly gives a unique look to the world overall. While not an option, I would recommend that it work in a pinch, but I would develop it at eight and a half minutes.

Roll 02 – Ilford Ilfotec HC
Here I went with a time right off the product page. As something which has basically adopted Dilution H or 1+63 as my go-to dilution of HC-110/Ilfotec HC, why would I bother with anything else, particularly in developing a high-contrast film in a developer known for being high-contrast? And the results here are far better than the first roll shot, although I’m still not happy with the results. The primary reason is that I lost a lot in the highlights, good shadow detail. Now I’m not sure where the trouble lay, the camera is good, the Maxxum 9 has a bulletproof meter. I shot under low contrast light, a bright but overcast day, and in an urban environment such as King Street in Hamilton gave plenty of different types of buildings and materials. Personally, I would knock the development back a minute or drop the speed a stop to ASA-12 instead of ASA-25. Either way, not a bad combination and you certainly get the fact the film has no grain at all and is perfectly sharp.

Roll 03 – Rodinal
It took me a while to come up with a better way to develop the film in Rodinal. After figuring out that I could sort of use Washi S developing times, I figured why not do the same for the Rodinal roll. I initially thought about stand developing the stuff in 1+200 for an hour, then went with the more standard 1+100 for an hour. But after realising that maybe if I dropped the times by 10% with the published Washi times, I could get a good result. The exact calculations call for 9.9 minutes, so I rounded up to 10 minutes. But after seeing the results from the first two rolls I ended up dropping the time by thirty seconds Sadly I didn’t get good results, in fact, it looked like I was a full stop over when developing. But the results were high-contrast (expected) but sharp and fine-grained. Rodinal would make a good choice in processing this film, but you would want to shoot the film at ASA-12. Another option is to shoot the film at 25, use the same 9.5 minutes but use a 1+50 dilution.

Roll 04 – FPP D96 (Kodak D-96)
There were two recommended developers listed on the FPP product page for Sonic 25 next to HC-110/Ilfotec HC, and those were TD-3 and D-96. While I don’t use many Technical films, I don’t keep TD-3 around nor invest in a whole bottle for a single roll of 35mm film. But D-96 that is a developer I could get behind and use it extensively and it will be used for a couple of other film stocks up for review this year and the subject of a future YouTube video. The FPP times called for 8 minutes. After seeing the results of Rodinal, I was a little wary of that time but did it anyway. And ended up with another disappointing roll, although the results I could drag kicking and screaming out from the dense negatives looked awesome, excellent mid-tones, fine grain and sharp images. And while the 8 minutes don’t line up in my mind, maybe 7 or 6.5 would be better for the ASA-25 speed or shooting the film slower at ASA-12 or ASA-6.

Final Thoughts
Over the course of shooting the four rolls, I always wondered what film FPP Sonic 25 actually is, and I did discover that. But out of respect for the FPP and their branding, I’m going to keep my mouth shut on the exact film stock. Although if you came to this review through the Film Review index page, you’d know who the film’s actual manufacturer is. After doing some research, I found that the suggested developer is Kodak D-97, which looks like you can easily make it yourself (once you’ve figured out the amounts needed). The best developers I can think of for the film is Kodak D-96 or if you can figure out a time Kodak Xtol. As for a film speed, I don’t think shooting it at ASA-25 is a good idea, maybe ASA-12 or ASA-6 would be a better index. I may even get another roll later in the year to do a good test using D-96 as my developer. I don’t think I can find regular use for FPP Sonic 25 in my regular shooting. Currently the best place to purchase FPP Sonic 25 is direct from the Film Photography Project website, they come pre-rolled in canisters of 24 exposures and cost 10$ (USD), additionally you can purchase Sonic 25 in 16mm for motion picture use.