There are a couple of highly specialised and mysterious developers out there, both made by the same company. While most people are drawn towards Diafine (which I plan on reviewing next year), Acufine is the cousin of that magic bullet developer. Like Diafine, Acufine’s chemistry is a trade secret; even the datasheets are redacted in that sense. But Acufine is a rare bird; it has the capability to increase the speed of most film stocks. But without all the drawbacks of push processing, increased grain, over the top contrast. While I have worked with Acufine before the stuff was way out of date, and I think I did a couple of things wrong, so I just left it behind. But when you have content to fill, it’s time to revisit the things of the past. 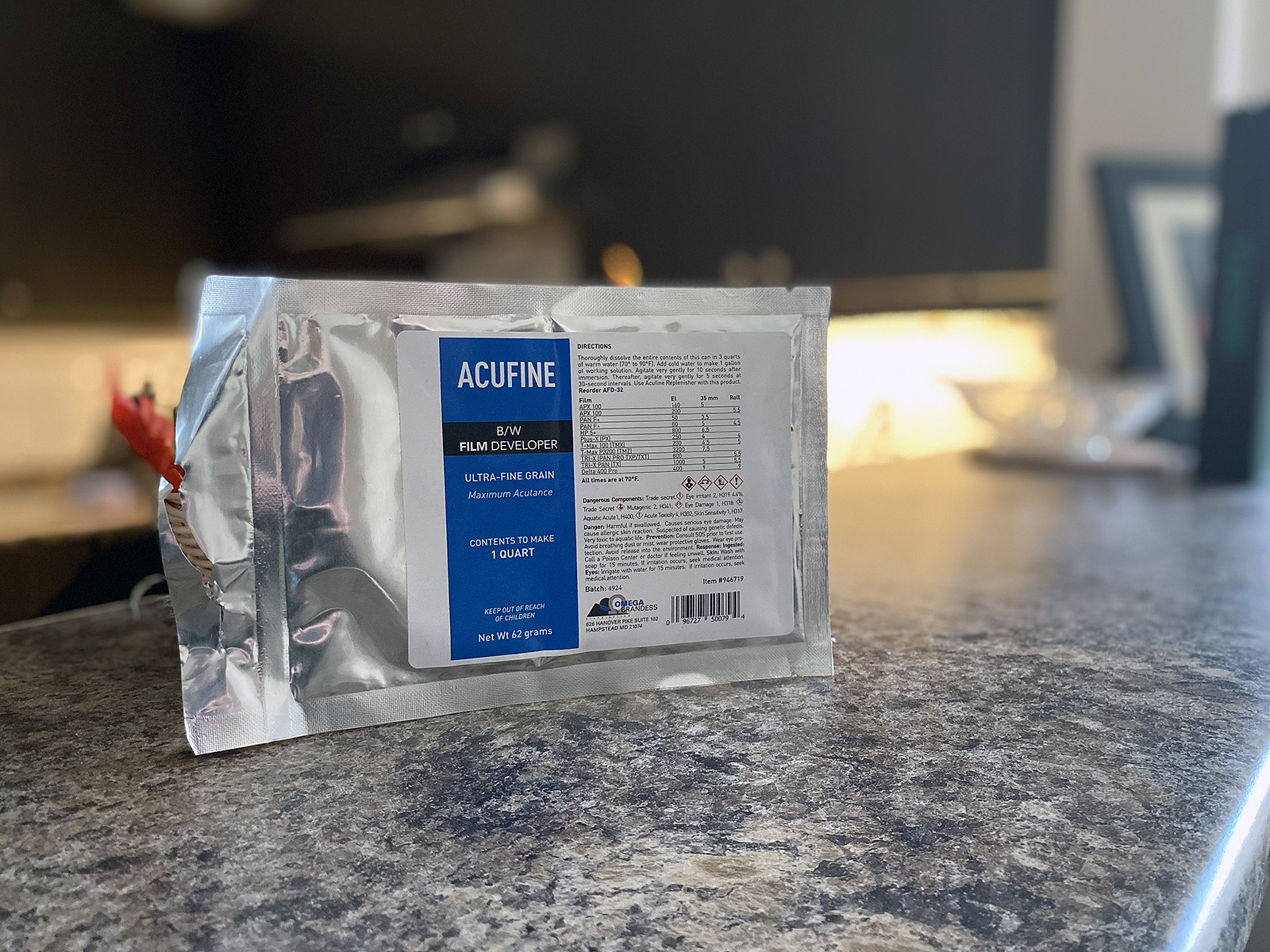 Handling
If you can mix up your standard powder developer, Acufine will be no stretch. You can get two versions, a quart or a gallon, one thing to note is that the one-quart pouch has the one-gallon instructions printed on the label. Earlier versions of Acufine will come in cans, but these days it comes in your standard foil pouch and is available in one quart and one-gallon sizes. You might see some colouration; mine had almost a dull yellow/brown colour upon mixing. The datasheet does mention this but also notes that such a colouration won’t affect the development. While there is no storage life stated for the developer, it will deteriorate over time with each roll of 135/36, one roll of 120 or four sheets o 4×5 using up 1/2 oz of the chemistry. You can adjust as you see fit with the details being laid out in the datasheet. Most full, well-stored bottles of Acufine can last for years according to some, make sure to keep track of the amount of developer and rolls/sheets you’ve run through and adjust accordingly. The one thing to note about Acufine is your agitation, while the massive dev chart doesn’t always mention this fact. You should be gentle with you agitation, with four inversions in the first ten seconds, then two every thirty seconds. It does require a bit more attention. If you miss a cycle, it doesn’t impact image quality I found.

Applications
Acufine is not what I would call a general use developer, but it is the most versatile speciality developer I’ve come across so far in writing these reviews. While many speciality developers are designed to process one or two film stocks providing the best possible results. Acufine is designed to provide the best possible results under specific conditions. Acufine will allow you to shoot films faster than box speed but removes any of the drawbacks to pushing your film. Oddly enough, there are no times for films like P3200 or Delta 3200, but you can shoot your Delta 400 and TMax 400 up to 3200. While I didn’t try that, it might be worth exploring in the future. Making Acufine an excellent developer for us here in Canada with our long, dull grey winters that seem to drag on forever. Being able to shoot our favourite films faster without drawbacks is always welcome. Films like Kodak Tri-X and TMax performed in ways I’ve never seen before when shot at speeds above ASA-800. And I got the same results from the two Ilford films, HP5+ and FP4+. Both performed awesome, especially the HP5+ which I gave a run for its money in less-than-ideal conditions. The one film I wouldn’t say I liked the results of too much was Rollei Retro 80s, sure I only shot it at ASA-100, but it took a lot of effort in Photoshop to get some usable results back. But if there’s one thing that you can Acufine will achieve and well is being able to get the most baseline results from a film despite any amount of under-exposure you throw its way, which makes it great for indoor available light work, and when you need that extra bump of speed.

Qualities
If there is a single word that I can use to describe the qualities of Acufine, it’s magic. As I mentioned previously, while not a general-purpose developer, it gives you an excellent baseline result no matter how much you under-expose the film. If you’re running with a film that is grainier than average, Acufine will not decrease that baseline grain, if your film is sharp, Acufine will not increase that sharpness. But what it will do is that it won’t exaggerate any of these things either. When you push films, you’ll find that the contrast and grain will increase the more you push the film and then push process that film. That is where the magic comes in, despite that, you won’t see that increase when you process in Acufine, it is the ultimate in compensating developers as it gives you, to be honest, the look of film exposed at box speed in Kodak D-76/Ilford ID-11. I say that because when I look roll of Tri-X shot at ASA-400 and TMax 400 shot at ASA-400 processed in D-76 next to rolls shot at ASA-1000 and ASA-1600 respectively the results are darn close. The one thing I do notice with Acufine is a slight decrease in contrast, but that’s of no issue as it can be easily fixed in post-processing.

Lowdown
I’ll admit, when I first put Acufine down on the list of developers to review this year I started a little sceptical, having only used it once before to process a single roll of film as was ‘meh’ about it, I didn’t think it could do what it says. Yet I quickly realised the power of Acufine wasn’t improving film at box speed, it was improving how well it develops film when pushed beyond that box speed. That is where the power and magic of Acufine stand above most other developers I’ve used. And that’s saying something because I do love Ilford Microphen when it comes to pushing processing, but it does not hold a candle to Acufine. As a speciality developer, you do have to go to speciality photographic suppliers, Argentix.ca and Freestyle Photographic are your best bets. And you will pay for the stuff, one-quart costs about 20$ while a gallon costs 51$ (Canadian). Given that the stuff will last nearly forever if well stored and not abused too much, it would be worth it. And while I don’t do a lot of pushing of film, now that I know that I have such a tool at my disposal, it’ll be worthwhile keeping Acufine in the back of my mind.

Recommended Reading
Don’t just take my word on Acufine check out these other blogs on the subject!
No other reviews found