You’re probably wondering why I’m reviewing a Nikkormat EL when I’ve reviewed a Nikon FE. The reason is simple; the Nikkormat EL is the FE’s foundation, the original Nikon electronic semi-automatic camera. This means that to understand where the FE comes from, I needed to try out an EL. That was my first mistake; the second mistake was shooting a second roll through the Nikkormat EL. I don’t think this mistake is a bad thing. The camera worked perfectly in both rolls; the mistake was that now I want a Nikkormat EL. It’s an easy-to-use camera, especially if you’ve used an FE or FE2, and is a joy to use. Special thanks to my good friend and brother in the film, Bill Smith, for loaning out the Nikkormat EL for a review. 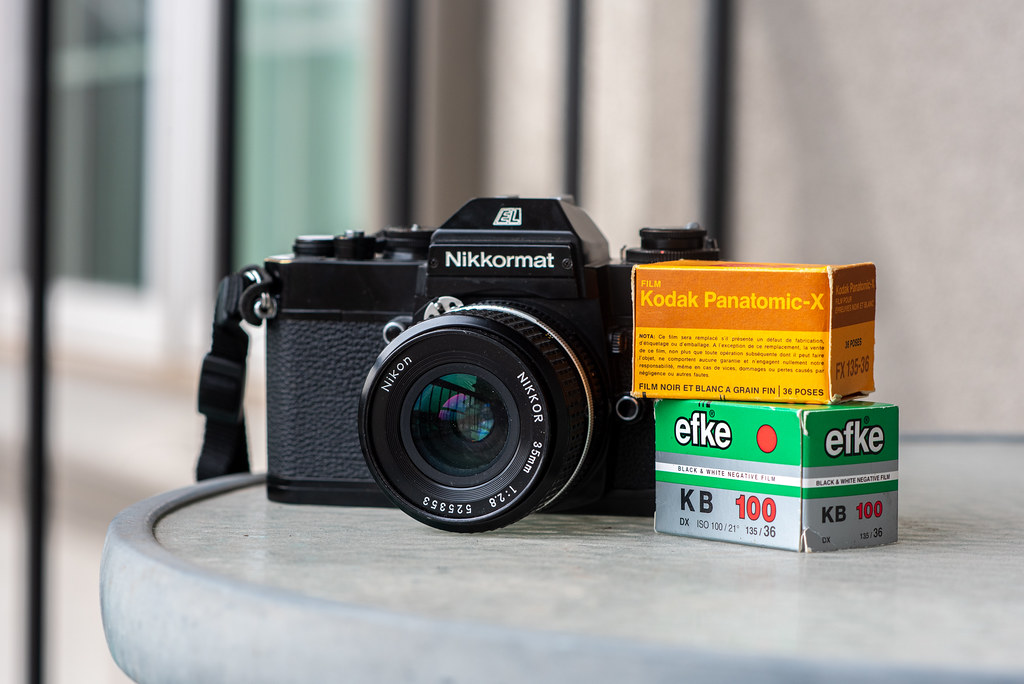 Background
Like all Nikon SLRs, the Nikkormat EL can trace its heritage to the original Nikon F from 1959. Nikon aimed the F at the professional photographer market. Several other companies like Canon and Minolta were targeting the consumer market. Nikon’s early attempts were ultimately failures, namely the Nikkorex line. In 1965 that all changed when they released the Nikkormat FT, using the same care and precision they did with the F and had a hit. The Nikkormat FT used the same F-Mount as the F and could accept all the same Auto-Nikkor lenses allowing amateur photographers to access the same quality optics but with a camera body at a fraction of a cost. Plus, the FT used the same match needle single CdS cell exposure system as the Phototomic T head for the F. But the FT had its own troubles and in 1967 Nikon released the Nikkormat FTn that resolved a lot of the earlier issues and added the now-famous 60/40 centre-weighted metering. It also allowed the camera to accept lenses with an aperture range of f/1.2 to f/32. While Nikon continued to be known for solid mechanical and manual cameras with the release of the F2 in 1971, they also began experimenting with semi-automatic exposure and the use of electronics in their cameras. Nikon would not be the first. That milestone came back in 1966 by East German camera giant Pentacon with the Praktica Electronic that used circuits rather than gears to control shutter timing. Plus, Nikon wanted to make full use of the Copal Square shutter’s abilities that used electromagnets to control the virtual metal focal-plane shutter. The FTn used the Copal Square but remained a mechanical camera. Nikon had produced an attachment to allow for shutter priority semi-automatic exposure on the F2, but it was always an add on, not a native function. The Nikkormat EL, released in 1972, marked a radical shift. The camera operated with electronic circuits, a Copal Square shutter, and included aperture priority semi-automatic exposure. And did it all with existing Auto-Nikkor (non-AI) lenses. These were also smaller than the all-mechanical FTn. The EL saw production for only a few years before an improved version, the Nikkormat ELW hit the market, and production ceased in 1976. The ELW added contacts for a motor winder and an improved Copal shutter that increased the slowest speed to eight seconds. The ELW would be among the final cameras to bear the Nikkormat name, as in 1977, the EL2 came out with the Nikon name. The EL2 would release the CdS cell with a Silicon Blue Cell for metering and allowed for AI lenses. But production of the EL2 was short, as the Nikon FE came out shortly afterwards as part of the new line of cameras built in response to the Olympus OM-System.

Impressions
The first thing that I noticed about the Nikkormat EL is how similar and different the camera is compared to the other Nikkormats. Having worked with both an FT3 and FTn, the EL offers up a much smaller profile. While the mechanical Nikkormats have a taller prism profile, while the EL has a far more squat profile on the prism. It actually reminds me of a Kyiv-19 or Nikon FA. The camera is also smaller and a touch lighter than its mechanical cousins. But is larger and heavier than the later FE. The look and feel of the EL are similar to other Nikkormats but with some improvements for a better look and feel than the FTn. The camera is well laid out with all the common controls where you would expect them. The film advance is smooth and blissfully short, allowing rapid advance, and the shutter release is equally smooth. The film speed selector is around the film rewind and has a catch to prevent accidental adjustment. There is a similar lock on the shutter speed dial, which engages when you set the camera to Aperture Priority (A). There is also a catch that prevents the camera’s accidental opening back, something that you see in all processional and semi-pro camera offerings from Nikon. The viewfinder is clean and simple, with a display that shows either the metered shutter speed and the selected shutter speed so that in manual mode, you can use a match-needle style to set your exposure setting. When the camera is off, the needle rests at the 1/15th speed. You use the half-pull method to power on the camera. There’s even a battery check indicator on the back of the camera’s top plate. But here’s the biggest issue with the camera, the power comes from a battery, but rather than on the bottom of the camera, the battery is located inside the mirror box, behind the mirror. To change it, you need to lock up the mirror and open the compartment. It can be difficult to do and could, if done wrong, could damage the mirror.

Experiences
If you have worked with any Nikon camera from the 1960s to 1980s, using the Nikkormat EL will be a breeze. And I honestly felt far more comfortable with the EL and found it far smoother to operate than my FE. And if you’re comfortable with an FE, the EL is almost the same camera. The one thing that I did find uncomfortable is the camera weight. Despite the small size, the EL is a heavy camera. Despite the added weight, the camera is well balanced, and the controls are in the right spot. Despite needing that older style lens mount, being a semi-automatic aperture indexing means that mounting the lens is simple; the camera will automatically detect the maximum aperture. In the field, the camera is a pleasure to use, loading film is simple, and the camera is smooth to operate. While not as bright, the viewfinder of the EL is clean and clear. With the shutter speeds clearly listed, the downside is that the aperture is not. The split viewfinder makes focusing easy. Despite having older CdS cells, the metering and auto-exposure system is dead-on perfect. The day I was out shooting, the camera for this review did not have the best lighting condition, and the film being used (Rollei Superpan 200) is not always the easiest. But the camera nailed everything perfectly (and the Adox Atomal 49 did a good job as well). In addition to these, the camera proved smooth in operation from film advance, loading, rewinding, and picture taking.

Optics
The EL was designed to work with Pre-AI or Auto-Nikkor lenses, which provides you with a wide range of awesome lenses. One of the best parts is that these pre-AI optics are often less expensive on the used market. That means that the camera requires a direct mechanical link using a pin-and-claw interface rather than a milled section of the lens mount and a follower on the camera. A good option for a three-lens kit for an EL would be a Nikkor-H 28mm (either an f/2.8 or f/3.5), a Nikkor-H 50mm f/2 (amazing lens), and a Nikkor-P 105mm f/2.5 (get the Sonnar design for a classic look). However, you can use your AI and AI-S lenses with the EL after a fashion. While all Nikon lenses produced after 1977 are either AI or AI-S, not all these lenses are created equal. Because the camera required that pin-and-claw interface, you can only mount lenses that still have that claw (or rabbit ear) on the lens. I’m lucky in the sense that all but one of my manual focus lenses have this claw still in place and I did use an AI-S in the creation of this review. But one of the best parts is that being the EL does have semi-automatic indexing, which means no shuffle when mounting the lens.

Lowdown
When I shot that second roll through the EL, I had to keep telling myself I didn’t need another Nikon SLR. And yet, there is something satisfying with shooting the EL that feels different from the FE. While offering up a similar experience with semi-automatic metering, the camera itself is far heavier. It offers up that oddly mechanical feel to it that the FE does not have. The EL does not command a high price (which also doesn’t help me). You can get a working camera for under 100$. The biggest issue is that these cameras are not easy to repair due to the electronics’ hardwired nature, and many repair technicians will not touch the EL. There is always the EL2, but these are rare on the used market due to the short production run and the FE preference. But if you want a piece of Nikon history and camera history for that matter, the EL makes an excellent addition to your toolkit. These are solid hardworking cameras that are the perfect choice if you have a large collection of pre-AI glass and want that semi-automatic exposure in a heavy-duty camera.