When it comes to slide film, Fuji Sensia introduced me to the medium, but it was Astia that made me love slide film. Sitting neatly in the worlds of Velvia 100 and Provia 100, Astia is often an overlooked member of the Fujichrome family, with more people going towards Velvia for rich saturated colours or Provia for a more natural tonality. But Astia was a happy medium between the two; you get a stronger contrast than Provia and more natural colours than Velvia. Astia quickly became my go-to slide film for trips and events where I wanted the magic of slide film with a bit more latitude in exposure. 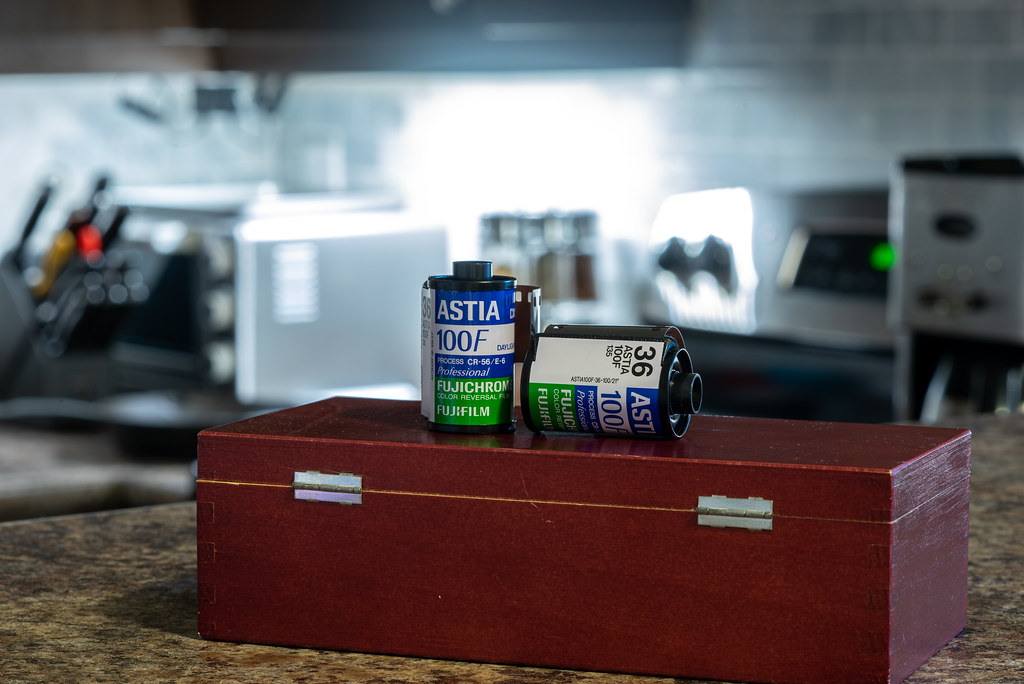 Colour Rendition
As I mentioned in my introduction, Astia is the happy medium between Provia and Velvia. It provides a natural colour palette that seems more in line with their colour negative films than slide film but do not think of the colour palette as soft. Astia produces some of the nicest colours I’ve seen in a slide film, and that’s even comparing it to Kodak Ektachrome E100 (the new stuff). I think the power of Astia comes with the power it has to take on the nature of the colour of the scene it’s shooting. Indoors in muted light, the colours become soft, almost pastel, while you get a higher saturation rate in the bright overhead light. And in the fall, you get amazing oranges and reds out the leaves. It even handles low light well, as seen by some of the interior shots from Montreal. Overall, it certainly is a winning film based on how the colour looks!

Image Quality
And the hits keep on coming when it comes to the overall image quality you get out of Asista. There is no question that Fuji had a real winner here. Probably the best part about Astia is that you get a bit more forgiveness in exposure latitude than Velvia (100 and 50). I personally find that the quality is amazing, and that’s having shot all three formats that could get of Astia. It certainly lives up to having an F at the end of the name, meaning Fine-Grain, while completely non-existent with 4×5 and 120 even in 35mm, there is little to no visible grain. And that’s going with digital scanning or projection of a 35mm slide. Asitia again hits a middle group; it has a bit more contrast and saturation in colour than Provia but far less than Velvia. In other words, your slides won’t reach out and slap you around with saturated colour and deep contrast. And despite the fine grain, the images remain sharp, both in edge sharpness and tonal separation.

Scanning
One of the hardest parts of working with slide film these days is scanning; at least, that has been my experience. But here, Fuji again has a winner; I had zero trouble scanning Astia film. And even back in the days when I was working with a V500 and using everything on automatic, the Epson scan software had zero issues locking in the right colour balance. Once I started working a bit more manual with my scanning workflow, I was surprised that Astia leaned a bit into the cyan but was easily fixed in post-processing. The film did tend to cup, but back rolling or using a dedicated film scanner helped flatten the negatives. The scans have a bit of aberration, but the noise reduction filter cannot fix in post-processing.

Overall Impression
As someone who does not shoot a lot of colour film, I find Astia a superb film stock to work with, and one that I wish still was around as I would probably shoot more slide film. Like Sensia, this was a great next step up in the slide film work for those who wanted to move beyond the ‘consumer’ films. While it never got the same cult following as Velvia, it certainly makes for a well-rounded slide film that worked well for projection and digitization. These days, with Fuji now down to only a pair of slide films, maybe it’s time to bring back Astia to fill the void left with the (American) cancellation of Velvia 100.