When in the past I’ve shot 6×7 cameras, I’ve found them clunky and unwieldy. Think back to the Mamiya Universal and RB67. Even the Bronica GS-1 which is better than most. None of these cameras had the style and handling of the Pentax 67II. Now the 67II fixes what I would see as problems with the 6×7 and 67. This camera is a traditional 35mm SLR on steroids and worthy of the description. There are some cameras that I have an instant enjoyment of, and this camera certainly ranks among those. Thanks to James Lee for loaning out this beauty. 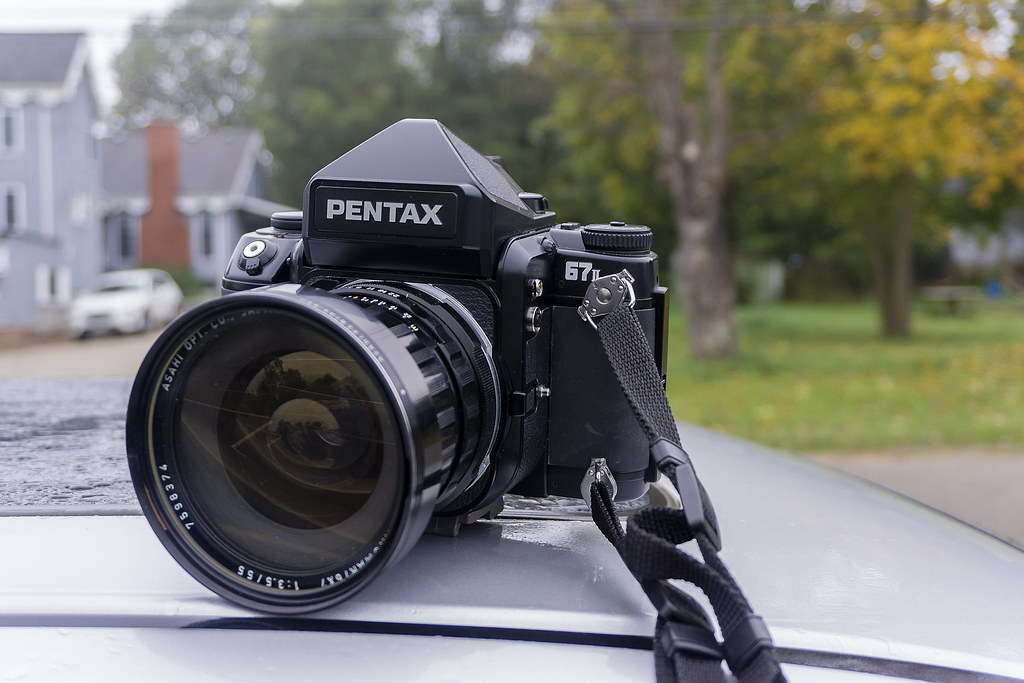 Background
One of the more interesting tidbits of history with the Pentax 67 line is that development started in 1960. The problem was that so much in the world of photographic technology during the decade continued to evolve. So developmental delays and camera specifications kept on changing; the two most significant changes from the initial design to the prototype was the ability to use 220 film and an electronic shutter. The Pentax 220 became available in 1964, and Ashai presented it to the world at 1966’s Photokina event. Originally known as the Pentax 220, the camera could only use the 220 format film and shot these in 6×7, giving the photographer twenty shots per roll. One thing that set the Pentax 220 apart from other cameras is that it took the idea of a traditional SLR but super-sized the format. They also modified the conventional K-Mount by increasing the size and giving the camera two mounts. The inner mount supported the 35-300mm lenses, while the outer mount supported the 400-1000mm lenses. By the time the camera hit the wider market in 1969, a few more changes had polished off the camera. The name changed to Pentax 6×7 and allowed it to use both 120 and 220 film formats. It also allowed the camera to become a full system camera, with interchangeable lenses, prism finders, including a TTL metered prism, not to mention a wide range of accessories to improve the handling. The camera was utterly dependent on batteries, with the camera initially using a mercury cell and those made after 1971 using the modern silver-oxide cells. Despite being well-received, the camera had one weak point, the aperture linkage chain, which if a lens or prism is dismounted incorrectly, undue stress will break. It also suffered from a lack of a mirror lock and a heavy mirror slap when working on a tripod. In 1976, the 6×7 Mirror-Lock-Up (MLU); while the camera remained unchanged, the new MLU feature improved the usability. Ashai even offered up a retrofitting service for older bodies. The third update came in 1986 with the Pentax 67. Pentax dropped the Ashai name from the front plate, which is the first and most visible change. Another update to the 67 is the use of better materials and easier to handle controls. Pentax also improved and strengthened the coupling chain and a new TTL meter with a Silicon Photo Diode. Despite this, the handling of the 67 remained the same and required either an accessory or, in cases today, a 3D printed hand grip. The problem remained that even with the improvements made to the 67, it remained a camera of an earlier generation; despite being battery dependent from day one, most of the technology that drove the camera remained rooted in the 1970s. That changed in 1998 with the release of the Pentax 67II; while the previous updates were building on the existing camera, the 67II was a brand new beast. The camera featured a new modern look and feel in material construction, making it considerably lighter than the previous three versions. A hand-grip on the right side with the shutter button is there to match SLRs’ new modern design ethos. It also took the current CR123A cells, a pair of them, for power. It retained the same dual-bayonet mount along with full compatibility with all previous lenses. It did not bother with autofocus and finally did away with a physical linkage with the TTL prism. And the new prism had some modern tricks up its sleeve, being able to meter in spot, centre-weighted, and average mode. An LCD screen handles the frame counter rather than a physical counter, and you can run the camera in semi-automatic aperture priority mode. Production of both the Pentax 67II and Pentax 645NII ended in 2009.

Experience
If you’ve ever used any previous versions of the Pentax 67 line, then the Pentax 67II is going to be a breath of fresh air. Due to the oversized nature of the camera, the original versions have little in the way of ergonomics. The Pentax 67II is genuinely a camera of the 1990s, and Pentax’s designers certainly looked at the direction that most SLRs were taking. Gone is the boxy nature with little in the way of ergonomics. The new 67II fits perfectly in your hand, and while it is not a lightweight camera, it certainly doesn’t stress you out if you’re carrying it around for a day. Now, this also depends on the lens that you’re using; of the three that I used, the 55mm f/3.5 is undoubtedly the heaviest, and the 100mm f/4 macro one of the lighter ones. The controls are well laid out, and in familiar places, the viewfinder is big and bright, and even without a split prism, focusing is smooth and quickly done, and there’s plenty of information being displayed. The one thing that I do miss having in the viewfinder is a space to see the lens’s aperture, which might make life easier when trying to get the exposure adjusted. The film advance has a lengthy throw so that you won’t be firing through shots quickly, but the bonus is a single advance rather than a double. The 67II has the perfect blend of old and new technologies. If you’re someone who is shooting for print work, then the big 6×7 negative is exactly what you’re looking for, as it is the same ratio as a standard 8×10 size.

Optics
One of the best parts about the Pentax 67 system is that it uses the legendary Takumar optics. There have been three different lens groups released in the 67 mountings. The first generation of lenses came out in 1969; these were labelled Super Takumar and ran from 55mm to 800mm and even included a 35mm fish-eye lens. In 1971 the second generation Super-Multi-Coated Takumars ran from 55mm to 1000mm and had that 35mm fish-eye lens. The first batch of SMC lenses came out in 1980 with a 45mm to 800mm and included a 75mm shift lens, 120mm soft focus, 135mm Macro and a 165mm lens with a leaf shutter. A final batch of SMC lenses came out in the 1990s and updated the entire lineup from 45mm to 1000mm. But you cannot talk about the 67 lens lineup without talking about the legendary 105mm f/2.4; this lens is one of the most desirable lenses in the entire catalogue and is available in all three generations of lenses. And the best part is that the lenses are cross-compatible through all four versions of the camera. If you’re looking for a good starter kit, the 55mm f/3.5 and 105mm f/2.4 in either the Super-Multi-Coated or SMC version will give you a solid foundation.

The Lowdown
The Pentax 67II is a dangerous camera, if you’re a photographer of a certain type you will take to this camera right away. It’s an intelligent system with lots to offer any photographer who loves their traditional SLRs but wants something bigger. Most medium format cameras that are SLRs fall into the box category for lack of a better descriptor. We’re talking about the Mamiya RB/RZ/645, Hasselblad and Bronica. And while Pentax certainly could have gone along that tangent given they had the foundation in the Pentax 645. Yet, Pentax went with the look of an oversized SLR. This means that you can be comfortable working with these devices. Plus, they come with that big 6×7 negative, which is the perfect match for print work as the ratio is the same as 8×10. And this is a camera that feels at home both in the field and in the studio. Of course, this does come with a price tag, most cameras on the used market come with at least one lens, and prices are 3000-5000 dollars, and some are in the price range don’t have a lens attached. But you could also get lucky and pick up a camera and three lenses for about 5000. But after reshooting it, I can see the value of such a camera if I needed to replace all my medium format gear with a single system.