At your first glance, you see this Soviet Styled space-age packaging, and you know you’re in for a treat. In full disclosure, Mono 100 is not a new film stock, it is repackaged Fomapan 100 with the times adjusted to fit the reseller’s personal choices to get the best results. When I first learned that Kosmo Foto was working towards releasing a brand new film I jumped. And while I know today that film is just Fomapan 100, I still buy it on occasion because I like to support a fellow Alliance Member, and that Soviet-Style box art is just fantastic. 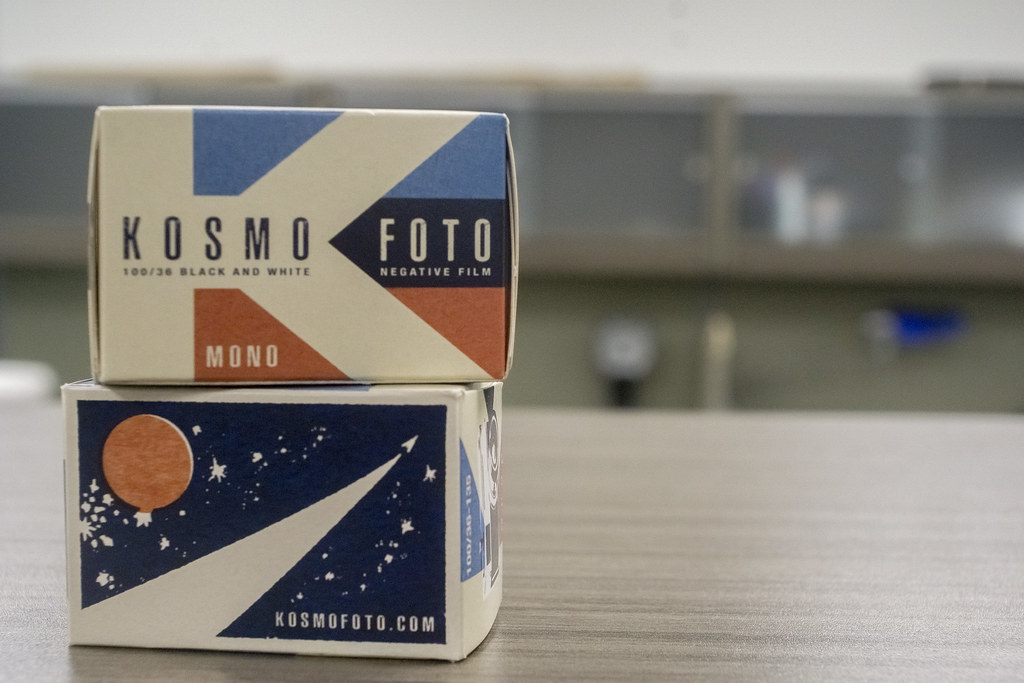 Roll 1 – Rodinal
Before I start, I’ll have to confess I went completely off-spec for this first roll of film. The trouble, at least for me was, it’s been drummed into my head that you get poor results for developing times less than five minutes (well I did soup Tri-X in HC-110 Dil. B for 4.5 minutes for many years before switching). So when the chart for Mono 100 noted the Rodinal time was 3.5 minutes for 1+25 dilution my brain screamed at me. I then sat down, did a bit of math, looked at another ASA-100 film and decided to use a 1+50 dilution, double the time and add thirty seconds. I honestly did not expect it to work, but it did. As for the results, well they speak for themselves. Mono 100 has rich tones across the spectrum, incredibly fine grain, something I wasn’t expecting.

Roll 2 – Kodak D-76
I never thought I would say this, but Mono 100 sings in D-76, I was again surprised at the short time for a diluted D-76, but in this case, the time is spot on. Not to mention D-76 shows off exactly what Mono 100 can do, smooth beautiful tones, and makes the world look right, the perfect monochromatic image. Especially with a deep yellow filter in front of the lens. There is some noticeable grain, but nothing that isn’t too bad.

Roll 3 – Kodak TMax Developer
And the hits just keep on coming, Mono 100 responded perfectly to TMax Developer. As a developer, TMax and I have a hit-and-miss relationship. When I like it, I like it, when I don’t, I sort of use up the rest of the bottle reluctantly and then let it be for months. But in light of doing all these film reviews, it seemed only fair to give it a go. While I noticed a drop in contrast and a bit more of an uptick in grain it really is not a bad pairing.

Roll 4 – Kodak HC-110
When the film first came out the datasheets all said not to develop the film in HC-110. Of course, at that time I was under the impression that Mono 100 was a new film stock, not re-rolled Fomapan 100. Once I knew the actual film stock, I figured I should give the film a go in HC-110. Rather than use the Dilution B times, I went with my usual dilution, the unofficial Dilution H. And the results speak for themselves. Excellent contrast and tone with clean whites and blacks, and excellent mid-tones. While there is no real increase in sharpness and grain, there’s nothing to make the grain ugly. HC-110 is, despite what has been said, an excellent choice.

Final Thoughts
When it comes to new films these days I am a bit wary. When I first learned about Mono 100 I figured we’d get a polyester base grain fest. Of course, that is not the case, I’m not knocking polyester-based films they just can be a bit hard to handle. The film reminds me of how Svema Foto 200 handles, with smooth realistic tones, excellent response to contrast filters and just makes the world look right. While I’m still not sold on a 3.5 minute time in Rodinal 1+25, I’m sure it turns out fine, just be ready with that stop bath! Knowing that the film is Fomapan 100 certainly helps expand the number of times available for the film. And gives you a much cooler box, unless you get one of that special anniversary Foma boxes. Mono 100 is available directly from the Kosmo Foto website along with various other online dealers such as Film Photography Project and Analogue Wonderland. Also in Toronto Downtown Camera carries the film in their physical store.