I’m a Nikon shooter and have shot a lot of Nikon Cameras, but that doesn’t mean I don’t appreciate a fine Canon. Of the modern Canon EOS cameras, I’ve shot the Elan 7ne is probably the best camera, I mean I’d take this over an EOS-1. But the Elan 7n/7ne are unique cameras in my view, one of a few the others being the Canon T90 and Nikon F90. These cameras have the specs and could very well be professional models but often are left aside. But if the three, the Elan 7ne would get the most publicity, but to be honest, if I had one land in my lap, I wouldn’t say no to keep it. Thanks to Mike Bitaxi for loaning this beauty out! 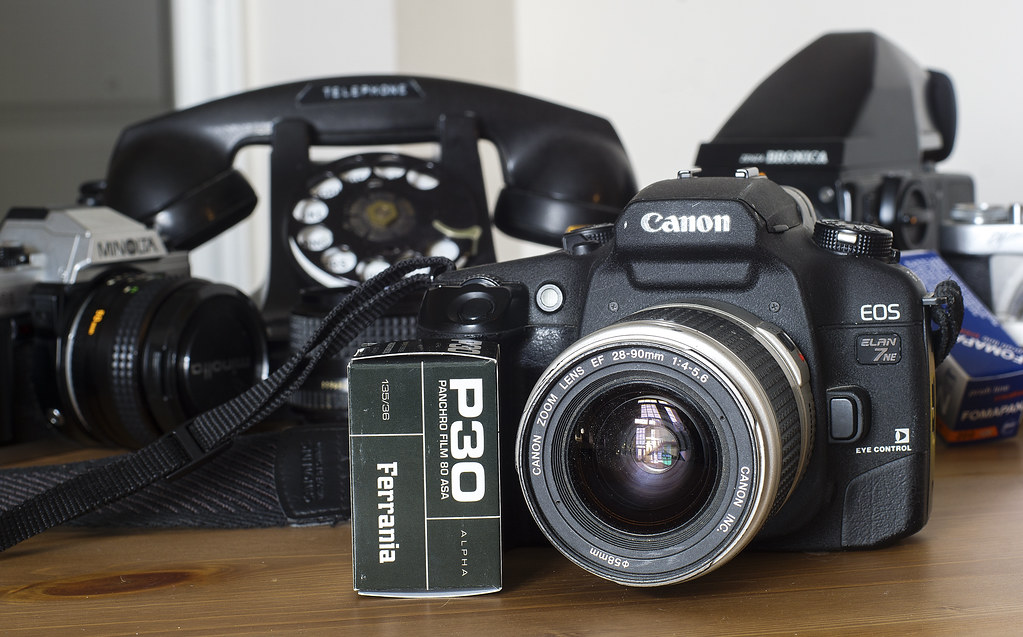 The Good
The first frame I shot on the camera my first instinct said, man, this is a smooth operating camera. Everything just works and works well. From loading the film to turning it on and operating the camera. The size, weight, and general feel of the camera make it ideal for shooting on a regular and daily basis, one thing that I had an issue with more consumer-oriented Canon cameras was the handgrip, far too narrow, but on the Elan 7ne, it’s perfect and reminds me of my old Nikon D70s or Nikon D300. The control layout is decent, with the main command dial right by the shutter release and the thumb wheel nicely placed so you can operate the camera, even in manual mode single-handed.

The Bad
There’s really only a couple things that I don’t really like on this camera. First off is where the on/off control is as part of the mode dial. Honestly, I don’t know why they did that. Having to not only turn on the camera but then remember to return to your mode is a bit odd to me. I personally would have preferred a separate on/off switch. While not a major dig at the camera, I find it more of an annoyance. The second annoyance is the eye-control, I ended up having to turn the feature off, which I’m glad you can. I can understand why such a system would be nice being able to look and have the camera focus, but honestly, I tried to get it to work and it didn’t. Not sure if I was doing it wrong or the system itself is flawed. As I said, at least you can turn it off and manually set the focus points.

The Lowdown
You don’t need to jump on an Elan 7ne, the original Elan 7n will do you just fine. As I said in the introduction the Elan 7n/ne is a camera that occupies a unique section of SLRs, when you started to see more advanced cameras that aren’t aimed at the professional but more the advanced amateur those who love photography and desire that higher-end camera but don’t have the budget. Now if you’re looking for a good spot to start in 35mm film cameras and already have the EF (not EF-S) than an Elan 7n would be a solid camera to start with as it does have a very similar look and feel to most digital SLRs offered up from Canon. Plus, even on the used market, they can be had for a fair price.