Nikon has an uncanny ability to build amazing cameras, not always but sometimes they get one just right, but then it just slides through the cracks. The Nikon F90 (N90 for you American readers) is one such camera, one from a proud line of SLRs that stretch back to the 1960s with the original Nikkormat. While often overlooked against such professional bodies like the Nikon F4 and Nikon F5 which the production of the F90 overlaps. The F90 can be had for a song these days and yet performs well both on its own and when paired with one of those bodies. And while I no longer own one, it served me well for many years, and now lives with a deserving photographer who both uses and loves the camera as I did. 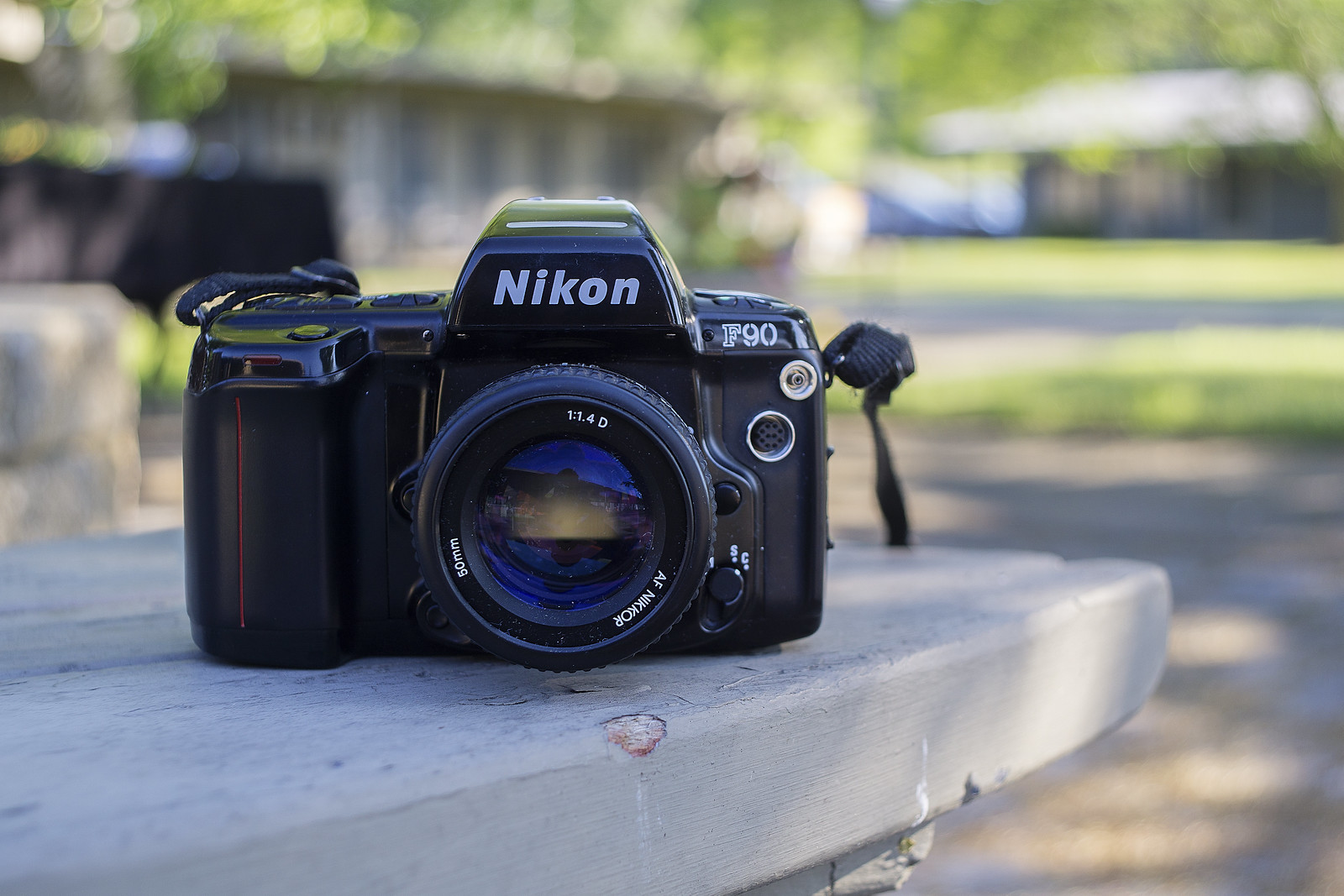 Background
As I mentioned in my first paragraph, the Nikon F90 comes from a long line of solid consumer cameras from Nikon. Starting in the 1960s with the Nikkormat line. Now I won’t go into the whole history of the Nikkormat line of cameras; if you want to read over that, I recommend reading my review on the Nikkormat FT3. The image of the F90 starts with one of the last cameras of the Nikkormat line, the EL2, which merged to become the FE. From the FE/FM line of cameras came the simpler Nikon EM. Nikon rode high among photographers who desired a quality camera built to near exacting standards. But the 1980s brought a second disruption that forced Nikon to adapt much as they did when the OM-1 came in the 1970s. Minolta hit the ground running with their Maxxum 7000 line of cameras with the first commercially successful autofocus camera system. Nikon did not lag far behind, they had attempted to modify an F3 to support autofocus, and took the lessons learned and released in 1986 the Nikon F-501 (N2020). Despite having developed matrix metering in 1983, such a function did not make it into the F-501. A simple CCD provided passive TTL Phase-Detection to drive an internal motor that mechanically coupled to the lens’s focusing elements. The system worked, but proved slow and could be inaccurate. The F-501 also matched much of the design ethos of the time. These hard angles made it look like a VCR than a camera, but certainly in line with similar cameras of the era, namely the F3, but in a single polycarbonate shell than metal. In 1988 alongside the Nikon F4, Nikon released the F-801 (N8008), in addition to improved autofocus performance Nikon included a 2D Matrix Metering system into the F-801. The F-801 also shifted to a design that looked much like its professional cousin, the F4. Despite the release of the 801, Nikon continued to produce the 501. The 501 ceased production in 1990 and the 801 in 1991 updating it to the F-801s with improved specs surrounding the autofocus system. Even with this, in 1992 Nikon released the F90. The 90 featured even better specifications as the 801, a smaller faster autofocus motor and improved AF detection using the CAM246 active autofocus system. But the F90 also included Nikon’s new 3D Matrix metering system. The F90 though marketed towards the advanced market soon earned a place in the camera bags of many professionals. So much so that in 1994 an improved model, the F90x (N90s) came out. F90x offered some improved autofocus systems and better access and use of accessories. The one accessory that saw drastic improvement is the MB-10 grip, the grip in addition to allowing the camera to be powered by AA batteries rather than AAA cells (in the body), it had a vertical shutter release. While the grip would power both the F90 and F90x, the release only worked with the F90x. The MF-26 back gave even more power to the F90(x), with allowances to have twelve-hour exposures, delayed shooting, and even interval shooting, all without needing to use a computer to reprogram the camera. Kodak saw the potential in the F90 and used the camera as the base unit for their early digital SLR system, the DSC400 system in 1994. Production of the F90 ended in 2001 alongside the production of the F3 and FM2n.

Impressions
If you’re not used to the design of Nikon cameras in the late 1980s, then the F90 might look a little chunky to you. I can remember one of my first trips to the old Henry’s Outlet Centre on Queen street and seeing a bunch of late 1980s early 1990s Nikon SLRs and thinking these were both ugly and probably not that good. Man was I wrong. While the F90 doesn’t exactly win any points for the beauty, it is a well laid out camera that balances the use of electronic functions with some level of manual control. Many of the controls are accessed using buttons and controlled by a single command dial. There are no complicated menu systems to go through to adjust the basics; everything is found laid out on the camera body. The one thing you do have to look out for is the rubberised coating on the camera can become sticky with age. Thankfully it is only on the back of the camera and can with some effort, and elbow grease is cleaned off. Everything is well laid out, and despite looking like some hybrid between the modern cameras and the blocky VCRs, it is a comfortable camera to hold. Sadly I never got to use the camera with the MB-10 grip so I cannot comment on how that adds, but I’m sure that if I had one with the larger lenses I used on the camera, it would have been far better balanced.

Experiences
No matter how you decide to use the F90, it won’t disappoint. I found that the camera worked best when running in Program Mode, it made life much easier, especially when I didn’t want to overthink about my exposure settings. But that is where the F90 shines; you don’t have to know a lot to get good results out of the F90. You have to remember that everything on the F90 is automatic, loading the film is easy and requires no tricks. The viewfinder is big, bright, and shows off all the information you need; switching modes is easy with a button and command dial. And exposure is dead on the money when shooting in matrix mode since the F90 was the testbed for Nikon 3D Matrix Metering which got a significant update with the release of the Nikon F5. The only trouble is that the F90 has only a full automatic rewind, I like having the tail left out, sadly even my F5 lacks that function. You can use the F90 all day and not get tired even on a simple strap it goes easy.

Optics
The F90 is designed around autofocus lenses and works perfectly in all modes with any AF Nikkor Type-D lenses. And honestly, I mostly used those lenses with the camera. Due to the smaller size of the body, the short primes are the best to use in my view, the 35/2D and 50/1.4D are excellent choices as well as the 28/2.8D or even 24/2.8D. Now the camera does work with manual focus lenses well but the rangefinder I found to be a little inaccurate at times, but you do have to make sure that you use AI or AI-S lenses. Pre-AI will not mount and could damage the camera. Now you can use Type-G lenses, and I did use my AF-S 14-24/2.8G, which ran perfectly even autofocusing. The trouble is lacking the aperture ring you will be restricted to Shutter Priority and Program mode only. Not a bad thing, but might be a deal-breaker to someone who prefers aperture priority over everything else.

Lowdown
If you don’t have or have never used an F90 or F90x and you’re a die-hard Nikon fan, it is worth your while to investigate getting an F90(x). If you are looking for something of the same era (yet newer) than the Nikon F4 but are turned off by the cost of the F4, then the F90 might just be the camera you’re looking for. While there are many online that are well above 200$ I recommend unless it’s brand new in box with all the accessories (MB-10 and MF-26), don’t spend that much. You can pick one up for well under 100$ today, and that’s both the F90 and F90x, expect to pay between 30-150$ on the used market on the camera, bonus if you get a grip with the camera. And while I have since parted ways with my camera, it wasn’t an easy departure; it stood up alongside my F5 as a backup for many years. Yeah, just get one.