I’m keeping with the budget-friendly theme here and going with the Ultrafine Extreme films for this month. I’m not exactly sure where Ultrafine gets its film stocks from, but it certainly knows how to get a decent product. Ultrafine Extreme 100 appears to be a classic grained panchromatic film that offers fine grain and excellent sharpness. And it certainly does not break the bank. The film isn’t so much cheap as it is inexpensive, a roll of 35mm 24-exposure runs about five dollars Canadian. I can honestly say I’m impressed by this film and it certainly stands up to most conditions you can throw at the film. 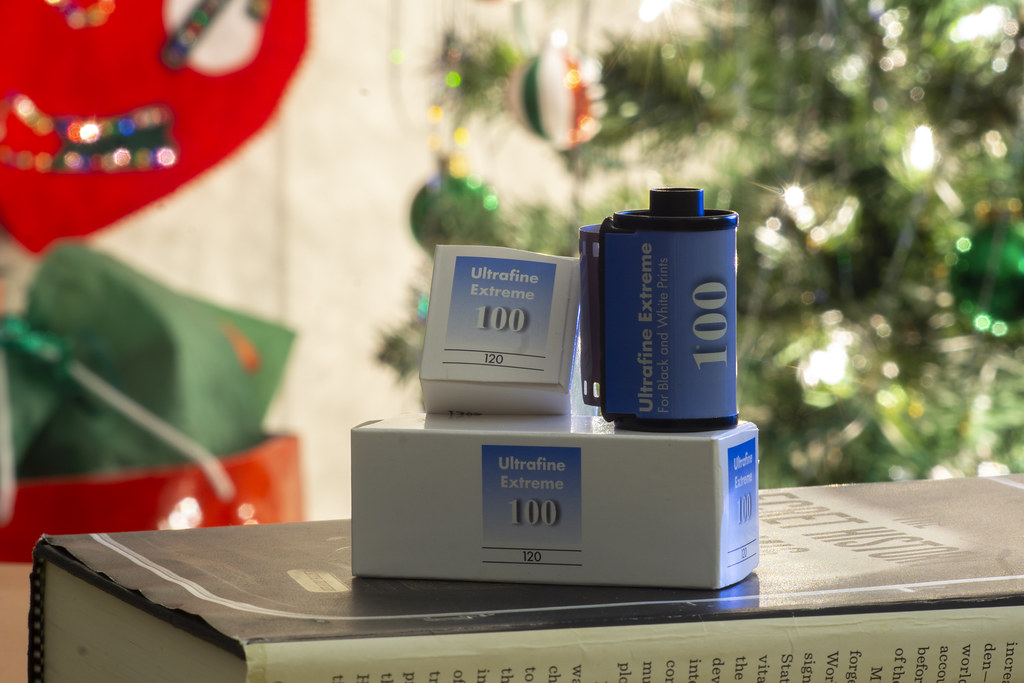 Roll 01 – Kodak D-76
Well, the film certainly knows how to give a strong start, and D-76 certainly makes it shine. I’m glad I decided to cut the developer 1+1 because the contrast is fairly high in these images, or the time is a little off, if I were to use the combo again I’d cut it by 30-seconds. There’s little-to-no grain in the resulting images, not to mention great tonality across the board despite the high-contrast. It certainly is a winning combination, which makes sense giving the target audience of the film, and D-76 is one of the cheaper developers out there.

Roll 02 – Kodak HC-110
If there’s one thing I’m finding out already about Extreme 100 is that it’s a rather contrasty film, but I don’t mind that to be honest. While I find it odd that there’s only a single dilution H time for the film stock, getting a B, E, and G times shouldn’t be too hard to calculate from the H time. But I digress, even under a lower dilution the film has a high-contrast feel but doesn’t reduce the wonderful tones that the film has with every shade represented. While not as sharp, the film still has a decent sharpness without an increase in grain, in fact in Medium Format, there’s hardly any grain at all.

Roll 03 – Ilford Microphen
It’s amazing when you have high expectations for a film before you even load it into a camera and then it delivers above and beyond what you expected! Having gotten amazing results after a two stop push with Extreme 400 and then developing it in HC-110. A single stop push and being developed in Microphen for Extreme 100 did not seem like that much of a stretch. So when the film came out of the tank, I already was impressed. And then in the scanned and editing, it was set, this was my favourite combination by far. The images retain a fairly fine grain, and the grain that is present is rather pleasing, I can only imagine what it would be like at box speed! And then there’s the contrast which is on point and only helps improve the tonality across the board; I think if I had diluted the developer 1+1 it would have hindered the contrast. And the images retain an amazing sharpness. All with some terrible lighting conditions at the time I was shooting the film.

Roll 04 – Rodinal
My first experience with Extreme 100 was developing it in Rodinal with a one-stop pull; I was impressed then as I am now. There’s a certain brightness about the images, it could be due to it being the first sunny day in a long time, or just because it’s the pull. Now up until now, there’s been little in the way of grain with Extreme 100, but here there’s a trade-off, you get sharp images but an increase in grain. It’s nothing too serious, but it is there. The grain is reduced when you step up the size to Medium Format, but even in 35mm, it is still pleasing. But other than that, the images have a pleasing contrast and tonality. Overall, probably one of the best options for Extreme 100. And I’m sure stand-developing the film at box speed will produce similar results.

Final Thoughts
Ultrafine Extreme 100 is the first budget-friendly film that I liked right from the start, I’ve shot the film even in my Holga 120N for World Toy Camera last year and it stood out there, I shot it in a 1930s folder, and it was beautiful there. So this is a film that I will highly recommend, and I don’t think there is a bad way to develop it. Which is saying something for a budget-friendly film. I don’t think I even want to know where the guys at Ultrafine Online find this film because ignorance is truly bliss. Speaking of Ultrafine Online, you can pick this stuff up directly from their online store, though there is some weirdness in shipping to Canada. For us in the Greater Toronto Area, Downtown Camera is the place to go for your Ultrafine Fix, and you can pick up a roll of 35mm for 5$, you can’t scoff at that.