Every so often a film stock will come up out of nowhere and surprise me, and today that film is FilmWashi “D”. Like all films that come out of FilmWashi, Washi D (as I’ll be calling it from now on) they take films out of their normal use and repurpose it for regular photographic duties. In the case of Washi D, it saw creation as a Russian surveillance film. The purpose of the film and what secrets it was designed to capture remains a mystery but because the film has the title ‘project: Sputnik’ on the label makes me think this film would be loaded up in orbiting satellites. A little taste of the cold war in this review, I guess. Plus having the fast ASA-500 rating, running it behind even dark filters makes life easy. Of course, the film is not the easiest to handle. One of the rolls I initially shot ended up getting majorly fouled up in the bag, thankfully I got the chance to revisit the film and got roll developed in Ilfotec HC. 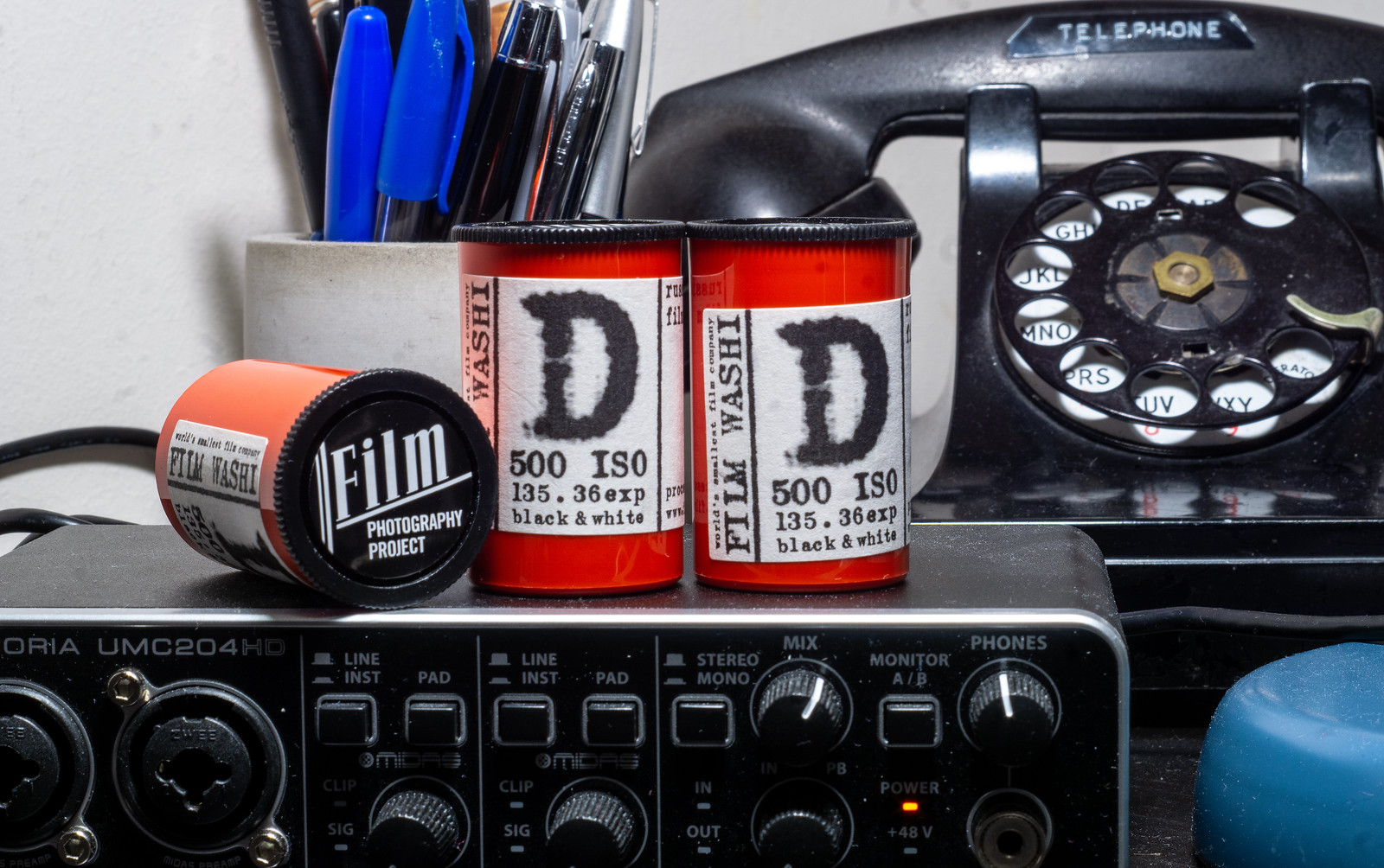 Roll 01 – Kodak D-76
After the struggle to get the roll loaded onto the reel, I started to have a sinking feeling about how the film would turn out. I’ve had experience with fast Russian films in the past, I’m of course thinking of Svema Foto 400, so when I was presented with an ASA-500 film and a short development time I had the thought we were about to have a grain fest. And when the negatives came out thin as well and scanned dark, my heart sank even lower. And then I ran the images through photoshop, and that is where the surprise came into play. There’s a lot of contrast here, but in a good way, I would put it more to the lower-high side on a scale for the film’s contrast. But what surprises me the most is that the images are crazy sharp and fine-grained at the same time. But being a surveillance film and even in 35mm, the details are right there. What also surprised me is how dark that sky got with only a deep yellow filter in front of the lens.

Roll 02 – Ilford Ilfotec HC
I’m glad to have gotten the chance to develop the film in Ilfotec HC. Only to see why this shouldn’t be used with Washi D. I’m not sure if it is the nature of the film or the fact that my time was off on the development. I think another minute, maybe a minute and a half might have done better. Either way, the contrast is cranked to max on this, and you’re losing a lot of the mid-tones and shadows in these (which again leans towards underdevelopment). Even with longer development, I think you’ll end up with a high-contrast and similar results as with the other developers with a significant darkening of the skies. You do end up with sharp images and a bit more grain. I think that maybe dropping the EI by a stop could help out also. Not the best option but it will do in a pinch.

Roll 03 – Rodinal
I’m not always one who trusts fast films with Rodinal, and that’s despite getting stunning results in the past. And when I processed this roll, I had yet to scan my first roll so I had no idea how it would behave. Like before I ended up with thin negatives. Also, at this point, I had just lost a roll to it being fouled up inside the change bag. Got the film sweats you know, and the second roll just caught all that humidity and stuck together like glue. Anyways, they also scanned in the dark but came out of photoshop with the same results as I had with D-76 and this time I had only mounted a pale yellow filter on the lens. Despite the similarity, there are some major differences. First off the contrast is a lot higher than the previous roll. I’m glad I went with the 1+50 time and not the 1+25 time, or the contrast would be beyond manageable. And while the images maintain their sharpness, even sharper than the D-76 shots, there is an uptick in visible grain. Nothing too serious, but still there. I think the film would do well with a stand developing process in Rodinal.

Final Thoughts
I’ll have to admit if I had not have worked with films like Svema Foto 200 and Derev Pan 200 Washi D would have given me a meltdown. The super-thin base is hard to work with both in-camera and in the change bag. My very first roll nearly gave me a heart attack when I popped the back and saw the film still sitting across the plane. Thankfully it had rewound properly, but I still ended up having to sacrifice the last couple inches of the film because it started binding. The moto for working with the film, no violence and don’t let the film sweats get to you. And while it’s hard to rate a film, especially a black and white film with only two rolls in the bag, I think that Washi D is an amazing film if you’re into these odd-ball film stocks that produce funky results. What surprised me the most was how much darkened the skies got after just a yellow filter, both a pale and deep yellow. It actually reminds me of Rollei Retro 400s and the similar results I received with the stock. But also, the fine grain and sharpness that both rolls produced for a fast Russian film. How does the film respond without a filter? I don’t know that roll is the one that I lost. But if you check out my good friend Jim Grey, he shot Washi D without a filter in my favourite American city. Will I shot with Washi D again, probably not, but will I recommend it? Yes, as long as you develop using steel, not plastic.