You’re probably thinking if I reviewed Kodak HC-110, why am I reviewing Ilford Ilfotec HC? Aren’t they the same thing? Well, the answer is yes and no. While Ilfotec HC is the Ilford version of Kodak HC-110, there are some subtle differences between the two. Here in Canada, the Ilford liquid chemistry is a pricey purchase and can be hard to come by. However, I chanced across a short-dated bottle of Ilfotec HC on a trip to Burlington Camera and decided to take a chance. Now, if you know me and my processing habits, you’ll know that I make a bottle of HC-110 last, so the Ilfotec sat sealed for nearly a year before I decided to crack it open to start getting images for this review. And here’s the thing, despite already being close to its expiry the stuff still works! 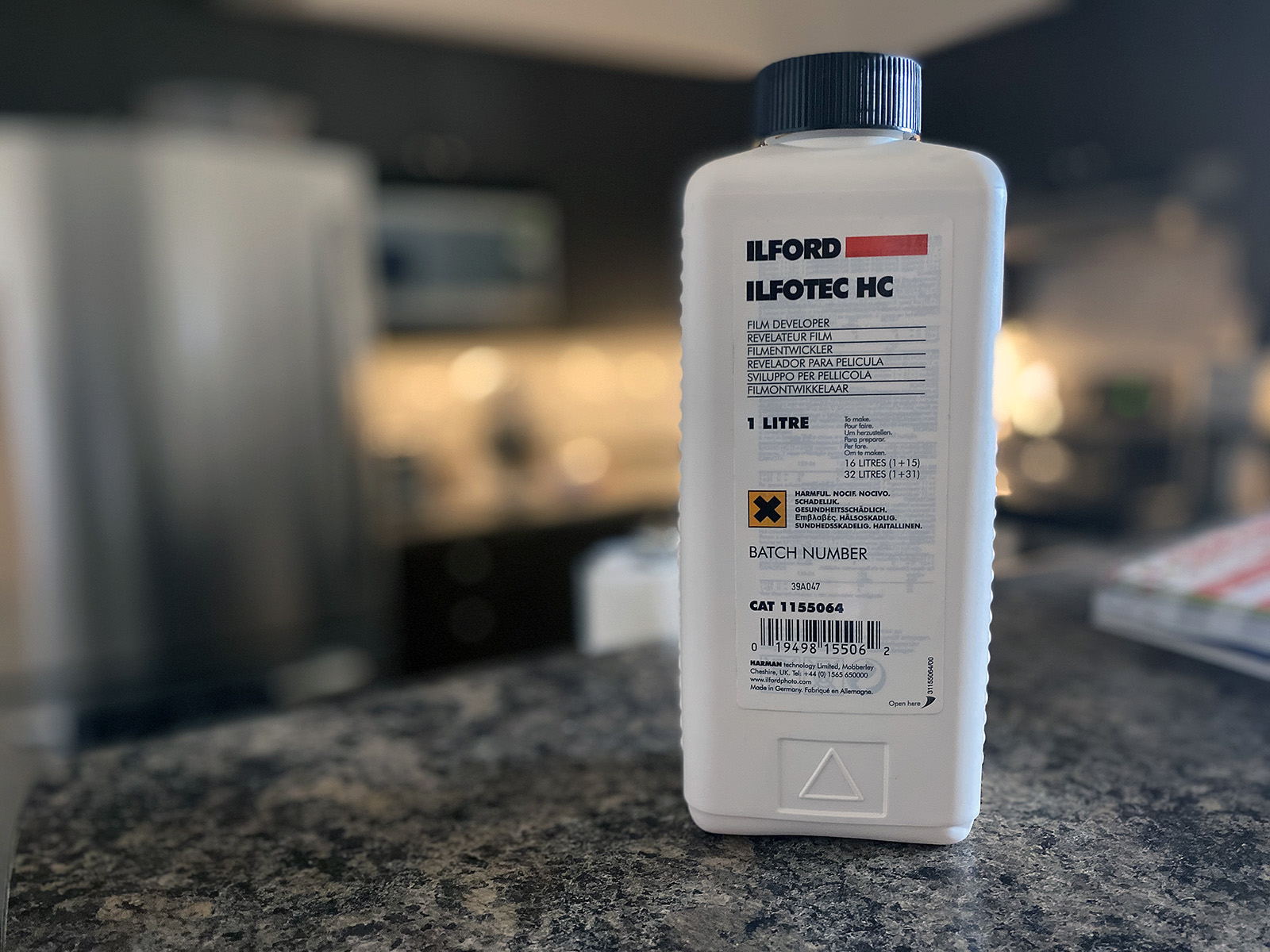 Handling
If you’re looking for a similar developer to HC-110 that’s easier to pour than the OG Syrup, HC is not that developer. While it lacks the trademarked yellow colour, HC is a clear syrup and has the same behaviour as OG HC-110. Now I haven’t used the new formula of HC-110 so I cannot comment on its longevity besides most people cannot, and I haven’t heard any grumbling online yet. There’s a good chance not many people have used the new stuff long enough yet. Thankfully I have been handling HC-110 for years now the switch the HC was not a hard one. The best way to handle the syrup is either using a small measuring cylinder or a syringe method. Still, the 1L bottles make it difficult, so if you do go with the syringe method, you can decant the bottle down into smaller manageable bottles. Like HC-110, the dilutions uses with HC are pretty much on point, with one exception. Unlike Kodak, Ilford published the dilutions as numerical rather than alpha values. The published dilutions run similar to those of HC-110, examples would be 1+15 and 1+31. There are also listed 1+11, 1+19, and 1+47. That said, I also made use of 1+63 and 1+39 in my tests using their HC-110 times, and they worked! The one thing that is interesting about Ilfotec HC is that you can use it as a replenisher for stronger concentrations of your working solution. You can replenish the 1+11, 1+15, and 1+31 dilutions of HC and reusing them after running your initial roll through. The details are on the developer’s datasheet. The one thing that HC doesn’t have is a long shelf life once you open the bottle, sealed it seems to have a long life as shown by my observations. Once opened and capped you have about six months, but that drops to two months as you use the developer up.

Applications
Throughout the bottle of HC, I used the developer with a wide range of films, from traditional grained (Tri-X, HP5+, Pan F+) modern cubic grained (TMax 400) and motion picture film (ORWO DN21 and DP31) and it pulled off excellent results. And while you can use Ilfotech HC/HC-110 times interchangeably as well as dilutions. The one exciting thing I did note, is while you can use HC-110 times and dilutions, in some cases the times are different. For example, HP5+ I usually run at five minutes with HC-110, but for Ilfotec HC it’s 6.5. And I like the 6.5 minute time far better than the 5 minute time. But the one application that Ilfotec HC is good for is the zone system especially if this is your first dip into that pond. The reason is that Ilford provides the time adjustment need for Normal (N) as well as N+ or N- times to help bring your image into those Five Zones. From there, you can quickly start expanding into that wider world without the added trouble of sifting through the Internet or old photography books.

Qualities
Like HC-110, Ilfotec HC is a reliable general-purpose and speciality developer. The contrast is controllable; it has semi-compensating capabilities and almost enhances a film’s sharpness, without adding too much grain. Of course, it doesn’t take away from any grain already in the film. What I mean is that if you have a film that is already grainy, you won’t see any real reduction, but in a fine-grain film, you won’t see any increase. Overall I liked every film I used with Ilfotec HC, plus being able to use all my usual choices for dilution helped even more. As many of you readers know, I’m a fan of Dilution H or 1+63, and every time I used that dilution, I got tangible results along with the more common dilutions. The one thing I did not try was pushing film only a bit of pulling in some cases, and the results were precisely on point.

Lowdown
If you’re a fan of Kodak HC-110, you don’t need to drop the cash on a bottle of Ilfotec HC, but if getting HC-110 in your area is a difficulty, Ilftec HC is undoubtedly an excellent substitution. Just make sure you’re prepared to work through that bottle quickly, it’s not as bulletproof on shelf life as its OG American cousin. I can’t say for sure about the new formula for HC-110 at this point only time will tell. Will I be using the stuff again, probably not, but I certainly will be adjusting some of my HC-110 times to match those of Ilfotec HC, and make a great deal of use of the zone system adjustments included in the datasheet. As I mentioned in the introduction, the stuff isn’t cheap and can be hard to come by in Canada, probably because of HC-110. But most online and physical stores where you buy your photochemistry will carry the stock, and honestly, if I couldn’t get HC-110 so quickly, Ilfotec HC would be a constant presence in my toolbox.

Recommended Reading
Don’t just take my word on Ilfotec HC check out these other blogs on the subject!
Ilford Product Page – Ilfotec HC