When I first decided to review Rollei Low Contrast developer (RLC), I doubted my choice. The list of available films remained short and some I could not find to purchase for the review. And most of the films on the list were technical films, which don’t always suit my photography. But I went ahead anyway after coming up with a decent list and getting my hands on a roll of Kodak Technical Pan and seeing the results from my good friend John Meadows. RLC is a strong developer if you have a contrasty film, fine-grained, and super sharp because the developer will make sure you get the best possible results out of them. RLC is the rebranded version of LP-Docufine LC. 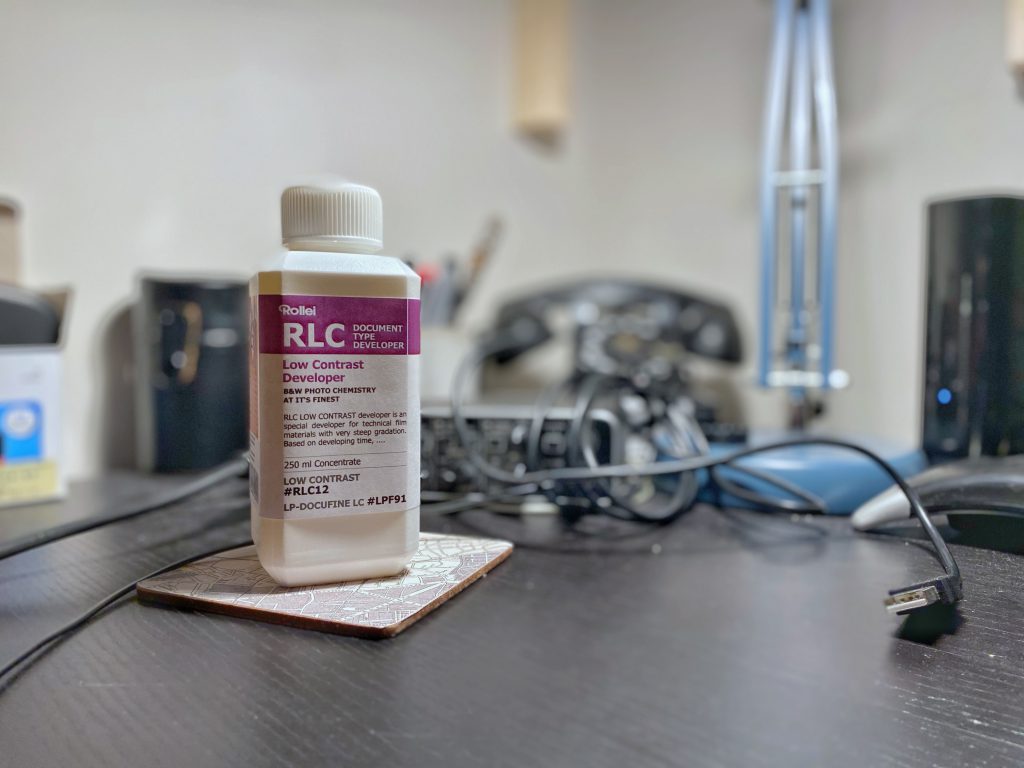 Handling
Despite being a made and packaged in a country set up for the metric system, this is the first developer that I’ve come across that I had to set my developing app to the Imperial (US OZ) to make my life easy. And also where I ran into my first major difficulty with RLC. The bottles are sold in 250mL volumes, or as it says on the bottle, enough for four rolls of film, it just didn’t specify what format those four rolls. I usually mix up chemistry in 500mL batches, but if you calculate that out, that’s 100mL of concentrate. You can get four rolls of film, as long as you do two rolls of 35mm each or are only planning on shooting two rolls of 120/220. I had shot four rolls, two in 35mm two in 120. I knew I didn’t have enough; thankfully, a nearby photographer had just enough of his own RLC from his open bottle to loan me the needed amount to finish off that fourth roll. Back to the measuring, to get the most out of my bottle I had to switch to measuring out just enough developer to cover the 35mm films, 300mL or 10oz, why 10oz, because 2oz measures out easier than the metric version. The actual mixing of the chemistry to a working solution is easy; it pours and has a slight tint to the concentrate. But when you mix in the water, it turns a rich red colour. The one thing that you do have to watch out for is shelf life. When sealed the bottle can last for upwards of a year, but after opening, it suffers from oxidation quickly, and it is recommended to use it up within 1-2 months. Hearing that I shot all four rolls, I needed over the course of two days and developed them over the same time period. To make sure I didn’t lose the power of this developer.

Applications
As I eluded to in the introduction paragraph, RLC is a developer tailored for technical films with a slow box speed. In fact, the slower the film, the better RLC seems to work. The one film that seems to like RLC the most is Rollei ATP 1.1, ATP or Advanced Technical Pan is Rollei’s answer to Kodak Technical Pan. But I could not find the stuff for sale at a reasonable price or get to me in time to actually work through the review rolls. But I did have a roll of Kodak Technical Pan that I picked up from a massive film stash put up for sale by ABCollectables. RLC worked well on three of the four rolls I tried, Fujifilm Neopan Acros 100 II, Rollei Ortho 25, and the aforementioned Technical Pan, all were shot well under ASA-100, with the Acros at 40 and Tech Pan at 32. The one film that I did not like is Rollei Retro 400s at ASA-200, the negatives were dense, and I had to do some post-processing trickery to pull some decent images out. Now in all cases, I did shoot under less than ideal conditions, with three of the rolls shot under deep overcast and rainy skies. For the Tech Pan, I used the Rollei ATP times but would either extend the times or shoot at a slower speed (ASA-10). Two other films that respond well to RLC is Adox CMS 20 II (a film I’m not a fan of) and Adox HR-50 (a film I am a fan of).

Qualities
Despite being shot under less-than-ideal conditions, as I mentioned previously, RLC did an amazing job pulling out the best possible images in the film. The results were mind-blowing as I quietly muttered to myself as I scanned and edited the negatives. The fine-grain and high acutance delivered by RLC is what sold me in the end. But to get those results, you’ll want to start with a film that has a high to medium contrast and already sharp, which is why it works well with technical films. I did notice a knock-back in contrast on all the films, but the biggest part of the developer is the sharpness on all films, the best results are with Technical Pan (no surprise there) and Fuji Acros 100 II (again, no surprise). But the results I got from Rollei Ortho 25 Plus are surprising; I have never seen that level of sharpness from the film. And yes, even Rollei Retro 400s did look good in the developer when it comes to sharpness. But you don’t gain any grain in any of the films tried, but I also started with sharp and fine-grained films.

Lowdown
If you have a stash of Kodak Technical Pan laying around and don’t want to invest in TD-3 or take a chance at expired Technodol, then Rollei RLC is an excellent option for developing any of your Kodak Technical Pan films. But you also have films like HR-50, CMS 20 II, or Rollei ATP hanging around you’ll get amazing results from all those films in RLC. But you can also get Technical film grade results out of Fuji Acros II and Rollei Ortho 25. But the key to getting the best results is using films that are no faster than ASA-100 and even then you’ll need to pull the film when shooting. But you can even use RLC for low-ISO films that are popular among a group of photographers within the community. Films like Eastman 2366 and 2238 could benefit from the qualities of RLC and even Lomography’s Babylon and Fantome films (ORWO DN21 and DP31). Sadly I didn’t have enough developer or film to try these options but may get another bottle to give a shot to processing these films with RLC. But not bad to have a developer turn from having general concern over even trying RLC to seeing a great deal of potential of the developer after only four rolls.

Recommended Reading
Don’t just take my word on RLC check out these other blogs on the subject!
No Other Reviews Found