This month, we’re sticking to an X-Ray theme with a new film stock from Film Washi. While I use the term ‘new’ only to indicate that it is a newly available stock through Film Washi. I found this film through the Film Photography Project Store through their email newsletter and was drawn to the fact it was available in 120 formats, so I jumped at the chance. The film stock was initially used for industrial non-destructive tests like welding quality checks. Being coated on each side of its thick blue polyester base and without an anti-halation layer will give the pictures a unique look. And after seeing the exciting results I got from last month’s review of Washi F, I was looking forward to seeing something different. 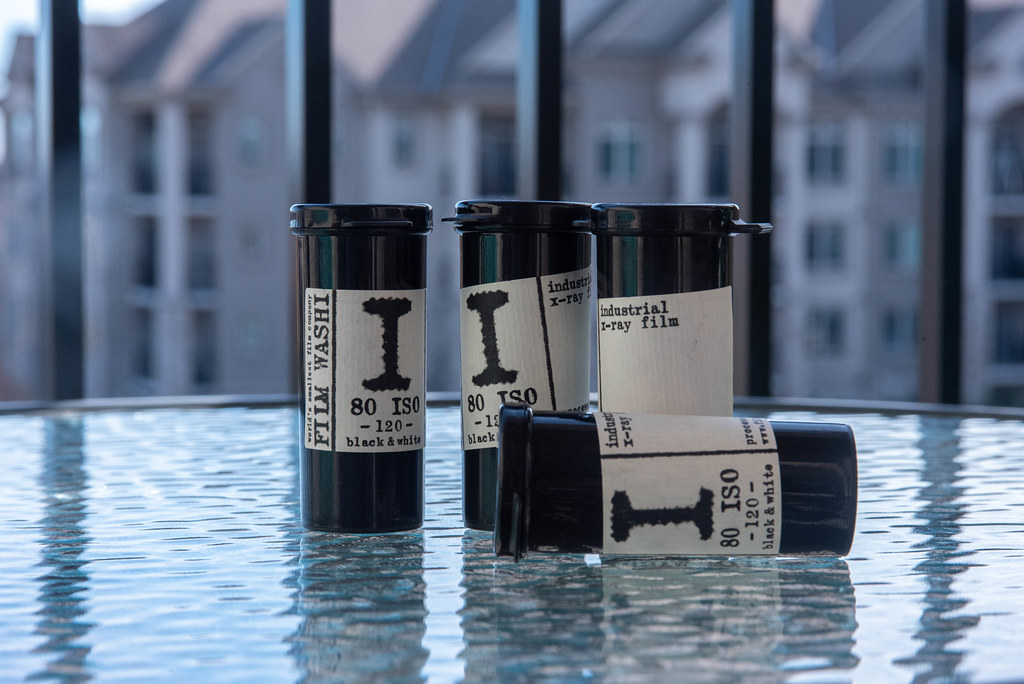 Roll 01 – Ilford ID-11
The original Washi datasheets called for a development time of 4.5 minutes at a 1+1 dilution. This time and dilution struck me as odd for two reasons. The first reason is that the rule of thumb for development is that you need times above five minutes for consistent results, and the second is that short of a development time for a dilute mix doesn’t add up. So I went with the HP5+ time of thirteen minutes. And I’m glad I did, although I wish I had bumped it a little more to say 14.5 minutes. I will assume that the datasheet is a misprint missing the 1. Thankfully in scanning, I recovered some of the images with a bit of heavy editing. I’m reasonably happy with the results, the grain is a little more noticeable than I expected, but the photos are clean, sharp, and have high contrast. I can see that ID-11/D-76 is an excellent choice for Washi I. Only make sure to meter for your shadows and give it that 14.5 minute time in the 1+1 dilution.

Roll 02 – Ilford Ilfotec HC
I stuck with my goto Ilfortec HC times for HP5+ for this time around, running with thirteen minutes at a 1+63 dilution. There was undoubtedly an improvement in my negatives, especially those where there wasn’t much difference between the shadows and highlights. Going with the longer development time and a more dilute developer certainly helped along the way, and I think some extra time in the tank might have helped. The grain and sharpness are improved with Ilfotec HC; I believe the lower dilution helped also tame the contrast slightly. At this point, I think that Washi I has a limited latitude and given its original use, I’m not surprised, X-Ray film is designed to do one thing under tightly controlled conditions.

Roll 03 – Adox Rodinal
Having seen poor results in the previous two negatives, I decided to change a couple of things this time around. Thankfully despite being incredibly cold the day I was out, the sun was bright direct and starting to pop up over the horizon. First of all, I pulled my trusty Pentax Spotmeter V out to handle the metering. I tried as best to run average metering, taking a reading from the highlights and then again from the shadows; most of the time, I had a nice, even five-stop difference. Still, I favoured my shadows being perfectly okay with sacrificing my highlights when I didn’t. Secondly, I upped my development time, going with the HP5+ times for Rodinal at a 1+50 dilution. And the negatives looked much better, still not where I want them but certainly better. Sadly when scanning, the troubles came back, the images still seemed a little undercooked, and I’m still dealing with extreme contrast. Although the quality I do see is a sharp, fine-grained image with high contrast. And thankfully, all without any real increase in visible grain.

Roll 04 – Ilford Ilfotec LC29
It was time to put everything together, it only took three rolls, but I think I have this film nailed. I again took out my Pentax Spotmeter V to handle the metering running averages between the shadows and highlights. Next, I went with the listed LC29 development times and upped the time by a minute and a half. And it worked. Finally, the negatives came out cleaner. However, we’re not escaping that contrast. It’s still there, and while certainly better and a much clearer picture of the film’s actual contrast, it’s high. However, you get a better idea of the film’s orthochromatic nature; it seems to not see blue, again right in light with most other x-ray films. When you get past the moulting on the film, thanks to the backing paper and packaging. In LC29, you have no grain and sharp results.

Final Thoughts
The Washi datasheets say that this film has a thick base; that is an understatement. The first roll I loaded onto the reel in the dark felt like cardstock, a departure for other Washi films. This film is easy to work within the dark bag and loads onto Paterson reels without any fighting. My Mamiya m645 handled the film well, although it struggled near the end of the roll, and the rolls seemed to be a bit fat after being wound up but didn’t spill past the reel. Either way, I scotch-taped down the end tongue and put the film back in the container. And thankfully ended up without any light leaks or fogging. My one suggestion is that you need to watch which camera you load this into, the Mamiya, Pentax, and Hasselblads would handle the film well, but a box camera or even a TLR might struggle a bit with such a thick film base. If there’s one thing that I finally figured out by the fourth roll, add 1.5 minutes to HP5+ times, have good accurate metering, and you’ll get results each time. Another option would be to over-expose the roll by a stop (ASA-40). I’ve reviewed some trying films, and I can now add Washi I among those films. You’d have better luck working with Washi F and getting consistent results than Washi I, and I am glad to be done with the film.

Further Reading
Don’t just take my word on Film Washi Type “I”; you can check out the reviews by other excellent reviewers!
No Other Reviews Found.