If you’re a long time listener of the Film Photography Podcast, this camera would be one of the more familiar ones, especially the iconic sound bite by Dan Domme, “Agfa Clack.” The camera earns its name by the clack sound the shutter makes, compared to the Agfa Click, also named for its shutter sound. Despite having many amazing cameras that perform perfectly, I have a soft spot for box cameras, so I started looking for an Agfa Clack after getting the Click-II. I should also note that the Clack is known as the Agfa Weekender in US Markets. 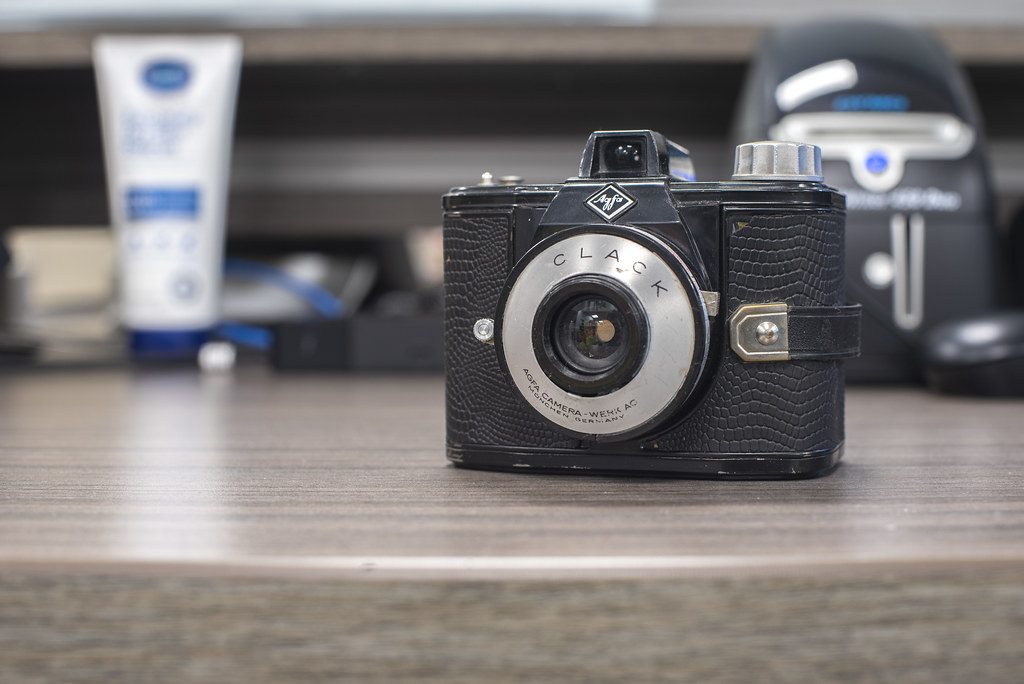 Background
Despite the overall normalcy and widespread availability of the Clack, the camera itself has a unique place in the history of the German Camera industry. It all started in 1945 after the German surrender, which ended World War Two, at least in the European theatre. The war had taken a toll on Germany; no major urban centre had been spared Allied bombings. And with the partition of Germany, the occupying forces needed to rebuild the economy fast and more substantial than it had been before the conflict. Much of what led up to World War Two and the rise of Hitler to power came about because of the vicious price placed on the German people after World War One. The photographic industry proved a vital part of the allied plan. What happened next is known to historians as Wirtschaftswunder or economic miracle. And tied into that miracle is the Agfa Clack. In contrast, the German photographic industry contained heavy hitters of premium cameras, thing Franke & Heideckie, Leitz, Voigtlander, and Zeiss Ikon. There needed to be a camera that was accessible to all, and Agfa was just the company to build one. One of the earliest box cameras from Agfa included the Box line of cameras, this included the B2, 50, and Syncro Box (600), the lineup produced from 1949-58 offered up an all-metal body with a simple meniscus lens and a 6×9 format but in portrait orientation. These cameras introduced me to medium format and Agfa cameras as a whole, and my mom still has her father’s Box 50, a gift when they emigrated to Canada from the Netherlands. But they needed something even more accessible, enter the Clack and the Click. Oddly enough, both cameras are named for their shutter’s sound; the larger Clack offered up that big 6×9 negative while the Click a smaller 6×6. Like the earlier Box, the Clack was produced out of a durable steel outer shell with reptile skin leatherette. A simple single element lens with a curved film plane allowed the creation of sharp images helped out by that landscape orientation 6×9 negative. The Clack also provided a much-needed camera for the export market and sold under the Weekender name in the United States. Despite having the big negative, the Clack never gained as much popularity as the Click. And while the Click got an update in 1959 with the Click-II, the Clack remained almost the same throughout its entire production, although later models swapped steel for plastic and a leatherette cover. Production of the Clack ended in 1965, while the Click-II continued until 1970.

Impressions
While you can see the linage of the box camera with the Clack, you also see an elevation in design that carries almost an art deco look about the body. The camera body is constructed out of sheet metal, the parts pressed out of the metal and formed together. A leatherette cover in a snakeskin pattern completes the camera body. Some plastic features, such as the viewfinder and film advanced knob. There is a simple viewfinder on the top, with a plastic wind knob (it is a box, so you have that red window). You also have those flash contacts, so best to keep your fingers away from them. You might get a bit of a shock. You have dual controls on the lens barrel; one controls your aperture, switching between the three options, with some icons to help you choose the aperture based on the lighting. The third option is a closeup filter; earlier models had an integral yellow filter. The second is your shutter release; the camera has a simple guillotine shutter with an instant release and bulb mode. There is also a carry handle that can be pulled out and makes carrying the camera quickly and then pushed flush in when shooting. The camera is a masterpiece of simple design and maintains the usefulness of the box camera even into the era of rapid improvement in photographic technology. A camera that could be purchased and used by anyone and followed that old statement from Kodak, you press the button, we do the rest.

Experiences
Despite the age of the camera, I ended up with an excellent copy. I have struggled to work with box cameras in the past. The Clack seems to have improved the loading procedure. I think that has to do with the orientation of the film. While most box cameras use the portrait orientation, the Clack is landscape. The film loads in what seems to be the opposite of what seems logical, but that could be only me. The most annoying part about loading and unloading the camera is that you have to remove the whole lower part of the body, including the sides; a massive lock/unlock control is located on the bottom. Putting the body back on is a bit fickle, needing to align the body into groves, both around the camera and around the lens housing. It will also not seem like it seats properly around the top plate but will snug into place when you lock down the control. One thing to note is that the controls are labelled in both German and English, except for the shutter control with is either B or M; B stands for Bulb, M is for ‘normal’ operation or 1/30″ fixed speed. You will need to watch out for a camera shake as a result. Because of the slow shutter speed and small apertures, you need to tailor your choice of film to the lighting conditions, but you can also do some push and pull development to help compensate for your choice of film and the situation. In both cases, I took a quick meter reading to help with setting the aperture and film speed. I shot it and developed it normally for the first roll with Ilford Pan F+. There is a shade for the red window, which you can flip to cover the window when not winding the film. Despite its small size, the viewfinder does help with composition and is positioned right above the viewfinder to help reduce parallax error. From there, the camera operates like any other box camera. I think mine needs a bit of work as my shutter will occasionally jam open, but the speed seems accurate and having only eight shots, it’s a fun camera to work with. The film advance is smooth, and I didn’t experience any jamming; plus, it is easy to put that initial tension on the take-up spool, preventing a fat roll. It is something to watch out for when loading the film.

Optics
Don’t look down on these cameras because of the lens. Besides, the Clack has a trick inside, a curved film plane. Plus, if you’ve ever worked with Agfa’s box offerings, you’ll know that even their single-element lenses are decent. And the Clack certainly delivers; when I pulled the first roll from the tank, I was already blown away by the results. We also have the advantage of using modern emulsions and developers that are fairly sharp in their own right and pairing with excellent developers. It also helps that my copy came to me in perfect condition, with an excellent clean lens with no sign of haze or blemishes, even cleaning marks. And you are getting the film loaded correctly with proper tension. So take that good quality single-element lens, a curved film plane, a big 6×9 negative, good tension and contact across the plane. You have the makings of a quality image. However, the lens isn’t perfect, there is some fall-off at the corners, but it’s nothing too severe and only appears significantly when using the larger aperture.

Lowdown
While I’m not one to use a box camera regularly, the Agfa Clack and my Click II will probably get a spot on my display shelf in the condo because they look good. Plus, the camera carries a particular historical significance. But I can see if I want to shoot a box camera; the Clack is one I’ll gravitate towards. If the shutter goes on the camera, I can probably find a way to convert the camera to shoot with a pinhole aperture. The cost of the cameras on the used market is a bit surprising, with most running from 25$ to 75$ and on the top end, you get a complete set with boxes, manuals, case and Box. Of course, there are some outliers with a price closer to 200$, which is insane for a box camera. I honestly would not pay more than 80$ for the camera. As a camera, the Clack certainly makes for a conversation piece, a usable box camera, and a bit of history and collector piece. Well worth the investment if you can find one for an affordable price. Plus, these cameras are fun to use and produce a big 6×9 negative and given that the camera is landscape rather than portrait orientation, which makes it even more awesome. If you’re a fan of the Film Photography Project, own a bit of FPP lore.