Once you have it down, one of the most satisfying parts of home development is taking it to the next level is building your B&W developer. And the first developer for many photographers that they brewed up themselves, including me, is Caffenol. As the name implies, it’s a developer with a coffee base. Specifically, the caffeic acid that is found in instant coffee. While it’s easy to buy all the raw material in your average grocery store to build your caffenol, there is something nice about having a ready-made pack. And it should come as no surprise that the fine folks at the Film Photography Project have released their caffenol developer, Cup ‘O Joe. It’s ready to perk up your home development game. 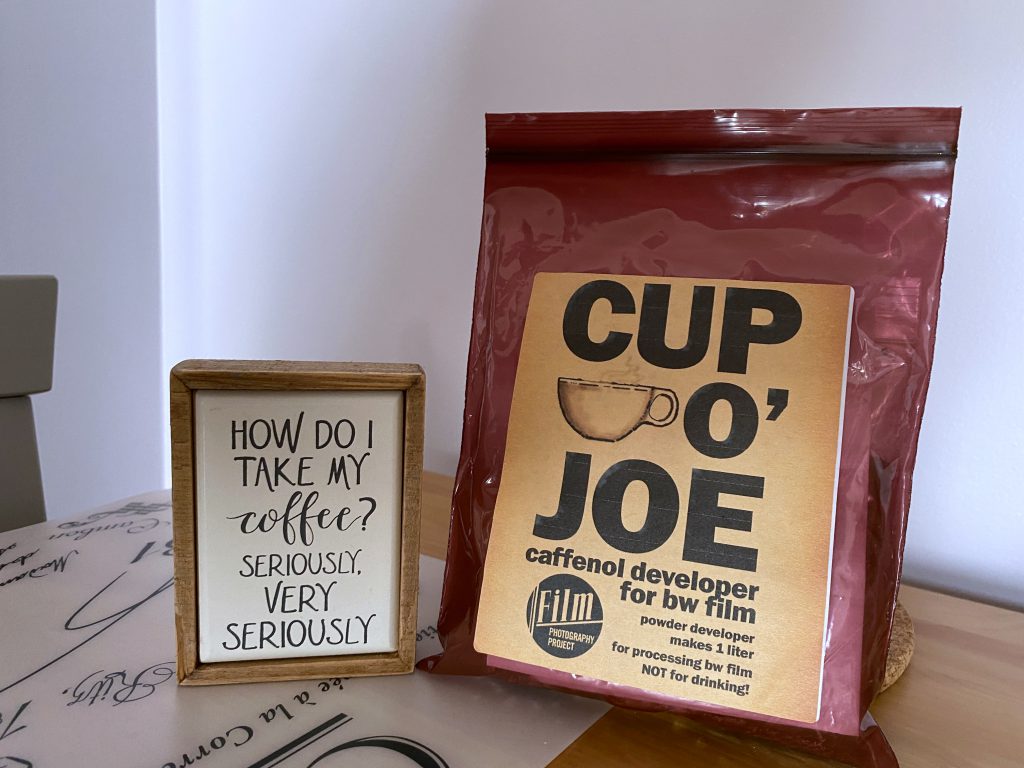 Handling
While you can easily mix up Caffenol on your own, there are hundreds of different blends, and it can be challenging to find all the right chemicals. I know it took me a while to local washing soda, but Vitamin C powder is easy. Having pre-mixed pouches makes life easy; while I don’t know the exact blend of the FPP Cup O Joe, it is probably based on the traditional Caffenol-CM recipes using instant coffee, washing soda and vitamin c powder. Mixing up, the developer will yield one litre of chemistry and can develop four rolls of 35mm or 120/220 film or eight sheets of 4×5. To mix from the provided powder, you will measure out 400 mL of water at 38°C (100°F), add the entire contents of the provided pouch, stir until dissolved, and add room temperature water to make up the 1 litre. While you can do this manually, I used a magnetic stirrer to make life easier. Once done, use a fine-mesh strainer to pour the solution into the storage bottle and store it in a cool, dry place. Since you’ll be mixing at a higher temperature, you’ll want to make sure you mix up the chemistry a couple of days before actually using it. From there, the bottle will last about three months in storage. You use the developer only as a stock solution; there are no dilutions with Caffenol. Be warned; this stuff smells too high heaven; good ventilation is a must, especially if you have people in your household who are sensitive to smell. Developing times are long; most are between 12 minutes and 15 minutes. Since I shot all at the same speed, I ran all my film through at the same time, thirteen and a half minutes using the B’s Processor. The universal time seemed to work, with similar results produced across all four film stocks. I’m unsure of the shelf life of the stock solution, but if I were to hazard a guess, it would probably be about a month, with a nearly unlimited shelf-life for the powder provided that the pouch remains airtight and stored in a dry location. One thing to note is that it’s best to use water as your stop bath; I ran three one-minute cycles emptying the tank after each cycle to help remove any leftover caffenol, then fix the film as you normally would. You can also dispose of Caffenol down the drain without any real impact on the environment; it is the one proper non-toxic developer.

Applications
If you love experimentation and quirky results, caffenol is undoubtedly a good developer choice. Caffenol CM is not designed for faster films; the FPP ran most of their tests on slower film stocks. All four rolls I shot were all 100-speed films. For my last taste of caffenol, I also went with a 100-speed film. Probably the best use for Caffenol is for someone who wants to dip their toes in the beautiful world of homebrew developers. Caffeenol is a perfect entry into that world with no real toxic ingredients, and it is fully customisable with different additives from the barebones to the highly specialised. It is also perfectly safe for septic tanks and can be inexpensive to make. Perfect for those working with a budget in a rural setting and who have the patience for longer developing times. Or have overly curious people or animals in their house and have no easy way to keep their chemistry under control and out of reach. While the stuff won’t kill a human, it could make a person very sick, and I cannot speak to how it would react in an animal. But like any photochemistry, proper storage and access control is a must. While Caffenol doesn’t have much of a place in my workflow, I can see it working well for those who don’t want to spend a lot of money and are okay with the different looks that caffenol gives.

Qualities
When it comes to your basic mixture of Caffenol, it behaves much like a general-purpose developer; it simply does its job and nothing more. But don’t let that stop you from using the developer; it does produce pleasing images. But you do have to tune your film to the results you want, rather than using the developer to enhance or remove undesirable elements from the film stock. FPP Cup ‘O Joe certainly fits this idea, and I can honestly say I enjoyed the results from all four rolls I developed. Caffenol is not a fine-grain developer, and in the case of my two grainer film stocks (GP3 and Pan100), there is a noticeable uptick in visible grain. Still, the Fomapan 100 and Acros II remained relatively fine-grained. I honestly did not mind the increase in grain because it certainly helped with the sharpness of the images. And that’s one thing that struck me is how sharp, especially that edge sharpness, these images presented themselves. The one thing is that Caffenol is a high-contrast developer; it is one true universal constant with any variant of Caffenol. If you have a film that already is high-contrast, expect a bit more bump in that and the same bump in a low contrast film. You might try over-exposing the film while shooting (shooting under box speed) by a stop then developing normally to help compensate if high contrast isn’t your cup of coffee.

Lowdown
When it comes to caffenol, this isn’t a developer for everyone and every situation. If you’re into experimental photography and development, then caffenol is the perfect brew! It’s not a developer I reach for all the time and certainly not one I would use in a paid situation. But occasionally, I like to walk on the wild side. This isn’t my first experience with caffenol; I worked with the developer to experiment on if the cheap instant coffee is a superior base for your caffenol blend. If you’re not inclined to build your caffenol developer, you can pick up the 1-Litre kit directly from the Film Photography Project Store. The developer kit costs 10.99 USD and has enough strength to develop four rolls of 35mm or 120 films. If you’re wanting to brew up your own caffenol, the caffenol website has a wide range of recipes from the basic to speciality.

Recommended Reading
Don’t just take my word on Cup ‘O Joe. Check out these other blogs on the subject!
Film Photography Project – Develop BW Film at Home with Caffenol