If the standard Svema Foto films are too grainy for you, how about stepping it down a notch and picking up a roll of Foto FN64, or FN64. Before this review, I had only shot a single roll of the stuff, and it did not turn out well. I eventually figured out that due to the thin PET base, the film is subject to light piping, and I ended up fogging the whole roll. Now if you’re a fan of the slower film that is having something different from what you get from other typical films, then FN64 is something for you to try. And while the original Svema factory is long gone, much of the equipment was picked up by Astrum LLC who continues to manufacture all Svema films. While not the most comfortable film to work with outside of the summer days, it is one that certainly would make for an excellent film for classic shoots and reenactments to catch that old-world flavour. 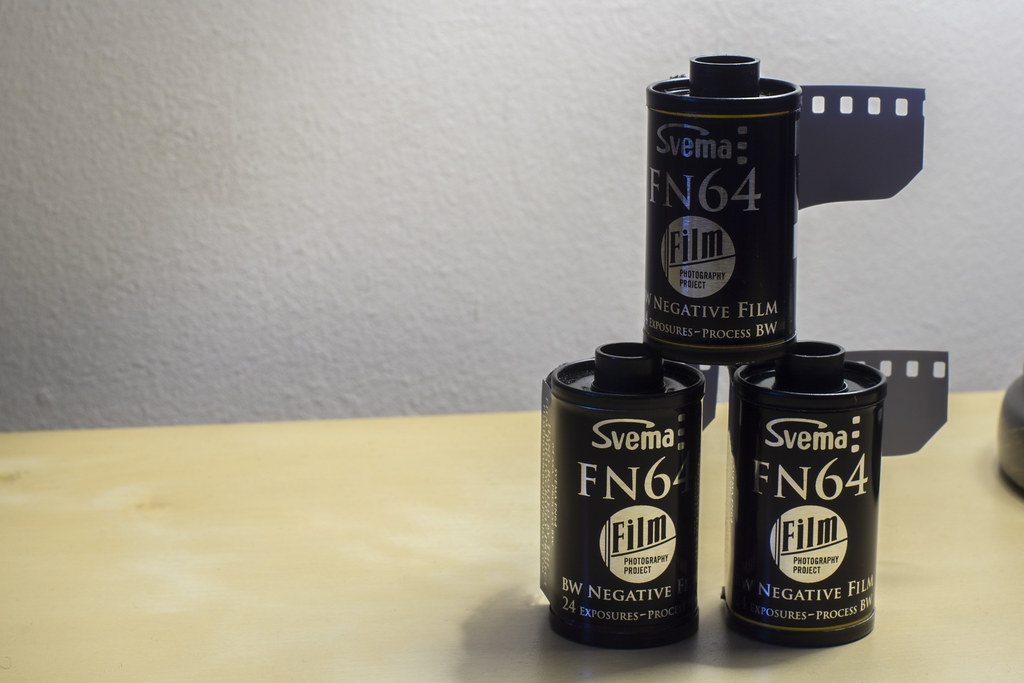 Roll 01 – Kodak D-76
Something you know that the film worked as soon as you pull the negatives out from the tank. And that certainly is how I felt when it came to souping FN64 in D-76. While I would have liked to have a 1+1 time for the film given the speed of the film, from the negatives they look good! There is a 1+3 time, but you have to shoot the film at ASA-50. After scanning, my initial thoughts were confirmed and blown out of the water. The images had dimension, both in a rich deep contrast and a level of sharpness I did not expect. The stock might do well in D-23 to help tame that contrast a little bit. And it did all that without any noticeable grain. It would be the lack of grain that gave me the biggest surprise because Svema films aren’t exactly known for their fine grain. I think FN64 would make for an excellent film to turn into black & white slides.

Roll 02 – Kodak HC-110
Again, this film keeps surprising me, both in the quality of the image but the consistency of the images. Like the roll developed in D-76, I knew I had some winners when I got this second roll from the tank. I don’t always expect fine grain from HC-110, but with FN64 and the dilute developer won out and the images have excellent sharpness and fine grain at the same time. But let’s talk contrast because I went with Dilution H the resulting images had extremely low contrast. I mean these images were grey across the board; they reminded me of Panatomic-X. Thankfully I was able to get the contrast up to the middle ground in Photoshop. That said, I’m sure this film will respond just as well with that boost in contrast if you ran with Dilution B.

Roll 03 – Rodinal
My first experience with FN64 was a roll I shot back at a Toronto Film Shooters Meetup, sadly when I pull the roll from the tank, the whole thing got fogged. This was long before I knew about the power of light piping on PET-based films. Thankfully I overcame both my fear and learned some tips on how to keep the piping to a minimum. And was presented with another amazing set of negatives. I think this nailed the results that I like in a film. The contrast is just right, rich but not overly contrasty. The images are sharp, but not grainy. And the tone across the board almost have a chrome feel to them. I’m glad I went with a 1+50 dilution instead of a 1+25 which might be a little overly contrasty.

Roll 04 – Pyrocat-HD
The note on the massive dev chart states that with Pyrocat-HD you get high-contrast with continuous tone. And I can certainly see that in the results that I was getting. Now I exposed this roll on a partly sunny day. That said, the high-contrast only showed up in the frames where the light was harsh (no surprise), and there was a lot of differences between the highlights and shadows. So in some cases, the actual details got lost in either the shadows or highlights. That said, Pyrocat-HD did a fantastic job in keeping the grain low (a one-stop pull probably helped also) while maintaining a level of sharpness. If I were to use this combo again, I would probably switch my camera to full matrix metering rather than centre-weighted as I do with B&W films.

Final Thoughts
Despite being a PET-based film, FN64, is not too hard to handle in the dark bag and loading onto plastic reels. It’s around the thickness of Rollei RPX films, which is surprising considering that both Svema Foto 200 and 400 films are incredibly thin and hard to handle. And while if you’re not used to PET-based films, it can be harder than acetate films, it’s a decent place to start. There is one good thing about the film base; it’s that the film always dries flat no matter the weather or air conditions. As for scanning, FN64 is an easy film to scan with only minor adjustments needed to get the film to the point that I feel gives the best rendition. I only managed to get currently 1 roll to scan with the Coolscan V ED, the rest I needed to use the Epson V700 as the Coolscan refused to load the film strip. That could be due to the thin base, or simply motion picture style sprockets. The best place to pick up FN64 is directly from the Film Photography Project, they have it available in pre-rolled DX-Coded canisters or in 100′ bulk rolls. A word of warning, FN64, is both an old and new film stock, Svema does not produce the current stock, but rather Austerum who produces all Svema films. There’s plenty of OG Svema FN64 on the market through various auction and craft sites. The new stuff is available through the FPP also Analogue Wonderland and locally for Canada through Downtown Camera, both of whom sources it from the FPP.