I need to start learning that when it comes to black and white developers, all of this has happened before, all of this will happen again. Take, for example, Rollei Low-Speed, RLS is a modern rebranding of LP-CUBE XS. There’s very little information about both developers online outside of official documentation. But it also has some interesting notes and is the first time using a film described as a deep layer developer. But the one thing I am familiar with is a developer that works best at speed less than the box. In fact, the amount of reduction in film speed is what I saw with PMK Pyro (which I plan on reviewing next year a bit of a throwback). 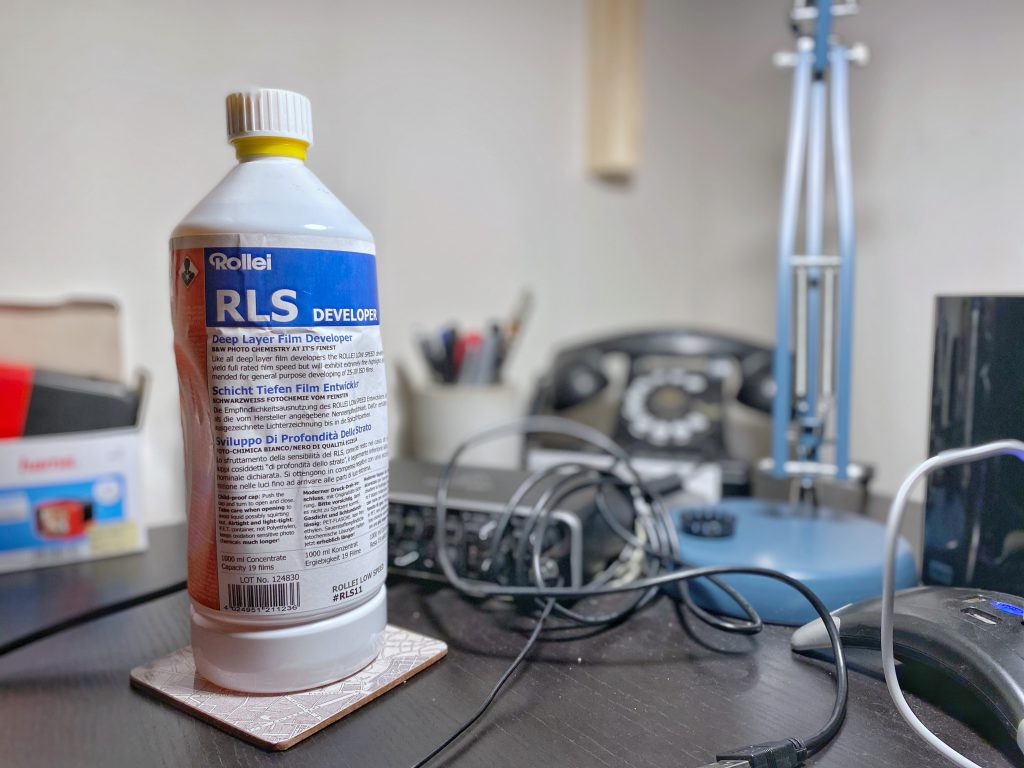 Handling
One of the first thing I noticed about RLS is how beat the bottle looked upon arrival. The easy way out is to blame the supplier or shipping company, but the fact is that the bottle is made of fairly thin plastic. Thankfully, the bottle is fairly sturdy despite appearances, but I wouldn’t be overly rough. When it comes to mixing, RLS mixes easy. The liquid pours with ease and does have a slight tint. The tint threw me, but again, that’s just how it comes. The one thing that I do like about RLS is that there’s only one dilution to mix at, 1+4, and a one-litre bottle has enough to concentrate on handling about ten rolls of film minimum (more if you use less working solution per roll). The one thing you do need to be a bit more careful about is your temperature, most call for something a little hotter, 24C/75F, but again like all black & white films you do get some forgiveness on your temperatures but try and keep it to about +/- 1.5 degrees. Thankfully, the developer uses all the normal agitation patterns but longer developing times, most being ten minutes at minimum. The developer’s shelf life is fairly long, without opening the concentrate will last for a couple of years, once opened you’ll want to use it all up in at least six months. Thankfully using 100mL at a time does make the bottle go quickly. And at least it is not oxidized quickly like Rollei Low Contrast.

Applications
The developer’s official documentation is that it’s designed for films at speeds between ASA-25 to ASA-200. But then again it’s all the name, Low Speed. Now that doesn’t mean you have only to shoot films in that speed range, but it does help, and even still you’ll have some speed loss at anything over ASA-100. When it comes to that speed loss you’re looking at about a stop, the two rolls of 400-Speed films, I shot at ASA-200, and even the ASA-100 and ASA-125 films, I was shooting at ASA-50. Digging into more times, even Ilford Pan F+ you lose a stop. The only film I got to shoot at box speed was an ASA-25 film. The best application I can think of for RLS is for those who want the same compensating qualities of a Pyro based developer but are turned off by the toxic nature of those developers. Not saying that RLS is non-toxic, it’s simply less toxic than Pyro. Given that you’re working at a warmer than normal temperature and the developer’s speed loss and low-contrast nature, one of the best uses I can see for RLS are working with older expired film. The roll of TMax 400, which expired back in the early 2000s turned out decently in RLS.

Qualities
Before we discuss the qualities delivered by RLS, let’s discuss the one thing that everyone who has seen images delivered by this developer has commented on, and that’s contrast. Because you’re already losing a stop of speed in most films you’re already looking at a drop in contrast. But if you’re shooting a film with medium to low contrast, you’ll see an even greater drop. But even a high contrast film will see a major drop in contrast. Now, if that’s of concern to you, then I do not recommend RLS as a developer to keep around because you’ll hate the stuff. But if you’re okay with a loss of contrast, maybe you’ll want to give it a go. Personally, I didn’t mind any of the contrast on the film I tested the developer with and found it most pleasing. But then again I like Panatomic-X, which is just a wonderfully graduated grey film. As for the other aspects of film development, RLS does an excellent job smoothing out grain while maintaining sharpness. The grain is no surprise with a loss of a stop of speed, but keeping that sharpness is impressive.

Lowdown
Being that I’m a fan of Pyro developers, Pyrocat-HD specifically I honestly don’t see a need for RLS in my chemistry kit. But that being said, it’s a solid developer and well worth adding to your kit if you want something for your slower films and doesn’t want the trouble of mixing up two concentrates then many RLS is for you. And while not overly versatile and does lack a wide range of development combinations, it does an excellent job on any film that you apply it to, including the faster films. The stuff isn’t cheap as a warning, costing about 50$ CAD, so probably won’t be a part of your regular developing category. But maybe if you’re a fan of the ultra-low films, then it just might be your magic bullet.